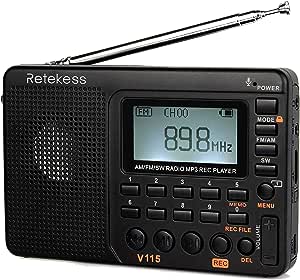 Visit the Retekess Store
4.2 out of 5 stars 2,523 ratings
Promotion Message Save 1% on F4530D关联到8月销量收音机取餐器主广告 when you purchase 1 or more Retekess products offered by Retevis Direct AU. 9 promotions
New (3) from $39.98 + FREE Delivery

4.2 out of 5 stars
4.2 out of 5
2,523 global ratings
How are ratings calculated?
To calculate the overall star rating and percentage breakdown by star, we don’t use a simple average. Instead, our system considers things like how recent a review is and if the reviewer bought the item on Amazon. It also analyses reviews to verify trustworthiness.

Hermes
1.0 out of 5 stars Rubbish
Reviewed in Australia on 7 May 2020
Verified Purchase
Firstly, deceived by photo. Radio very small.
Then after a while speaker stopped working. Overpriced and poorly made. A little piece of plastic junk. Not happy.

Pencil1388
4.0 out of 5 stars Needs regular batteries
Reviewed in Australia on 22 October 2019
Verified Purchase
Good but not great. It's in competition with my Sony ICF306 and isn't in the same league for robustness and practicality, which is what I need in a portable radio. Needs batteries to make it more usable. It takes 4-6 hours to recharge and during that time you can't listen to the radio. I'm always on edge wondering when the lithium battery is running down.
Read more
Helpful
Comment Report abuse

Anne McCrudden
1.0 out of 5 stars worse piece of rubbish ever
Reviewed in Australia on 21 September 2019
Verified Purchase
I bought this for a friend, she threw it in the bin

it just had static, would pick up a station

So there we go, id never buy anything like this again through Amazon.

Antidepressants depress me.
4.0 out of 5 stars Just ok
Reviewed in Australia on 6 July 2019
Verified Purchase
The shortwave feature isn't of strong power for good reception although the am and fm are good.
Read more
One person found this helpful
Helpful
Comment Report abuse

Carl
4.0 out of 5 stars Compact about the size of a wallet.
Reviewed in Australia on 15 January 2020
Verified Purchase
Happy with the radio although cannot use while charging.
Read more
2 people found this helpful
Helpful
Comment Report abuse

rubyred
5.0 out of 5 stars Great little radio
Reviewed in Australia on 5 April 2020
Verified Purchase
I haven’t worked out how to use all the functions yet, but very impressed with the sturdy construction, nothing flimsy about this little radio. And the sound is fantastic
Read more
Helpful
Comment Report abuse

Velly
4.0 out of 5 stars Good radio
Reviewed in Australia on 5 March 2020
Verified Purchase
Good little radio but noticed some scratches on the display.
I use it for emergency backup, very clear speaker for the size and price!

Michael Robinson
5.0 out of 5 stars All the Bells and WHISTLES
Reviewed in Australia on 3 November 2018
Verified Purchase
Radio exceeded all my expectations, the sound quality was superior to bigger and more expensive radios, would highly recommend
Read more
Helpful
Comment Report abuse
See all reviews

Chuck
4.0 out of 5 stars I like radios. But this one really tested me.
Reviewed in the United States on 16 November 2018
Verified Purchase
Concerning the engineers who designed this thing--especially the the user interface--I have to think they were dead drunk when they designed the user interface. Either that or they had been abused as children and decided to use this radio to torture those who buy it and thus get even with humanity.

I opened the packaging, removed the radio, and charged the battery. After that I fully expected it to work like all the previous radios I have owned, simply dial in a station and have it play, but NO! The system for locating a station and then connecting that station to one of the numerical push buttons is bizarre. I finally figured it out, no thanks to the manual; intuitive this radio is not. If you think you are a radio-savvy hotshot, this radio will give you a dose of humility.

See those buttons 1-9 +0 on the front of the radio? You need to use those to enter the frequency of the AM or FM station you want to listen to. Really. The manual doses out information like the instructions given with a scavenger hunt. That is, not enough information for you to know what to do, just minimally helpful general hints. It's like the instruction manual is deliberately holding back information, trying to jerk you around.

1. Enter frequency of station using buttons on the front of the radio (as described above)
2. When a favorite station is tuned, push #5 (also labeled underneath as "memo") using a long press (not a short jab)
3. As the "CH" flashes in the display, push the desired number (1-0 ) to assign the station you chose with the number 1-0 on the face of the radio.
4. Then you need to lock into memory the station frequency with the button number you chose with a short duration push of the >II button.
5. Repeat the steps above to set the rest of the stations you want to correlate with a numerical button 1-0.
6. You can change listening to radio stations up or down the dial sequentially by pushing the I<< or >>I buttons.
7. You can also change radio stations up or down the dial by pushing the button 1-0 that you set as I described above, the buttons associated with specific stations. But--and don't ask me why--it takes a full six seconds after you press the number of the station you want to listen to for it to change. You're gonna grow old waiting between stations. Pretty aggravating.

But dang, I just can't stay mad at this little bas--rd. It's nice and small, compact, and it looks/feels well made, with nice haptics feedback. And this isn't just any ol' common small radio. It is also a digital recorder! Slip a micro card into its slot and it will record for hours! This is a big deal. It will record off the radio, or from your spoken words, or from an outside source, a source with a 1/8" plug or a micro USB plug. How cool is that. And during playback you can fast forward--fast back and pause. But good luck trying to get a good grasp on the various aspects of the recording function, same as with the radio.

Another thing I like about this radio is the sound. It is very, very good for such a small radio. High volume potential and quite balanced and clear; an over-achieving amplifier and speaker.

In summary, once I got a grasp on how it operates, I liked it. For its price, it is quite unique. But the user interface no doubt was designed by an alien from another planet. Be resigned to figuring out how it works.
Read more
265 people found this helpful
Report abuse