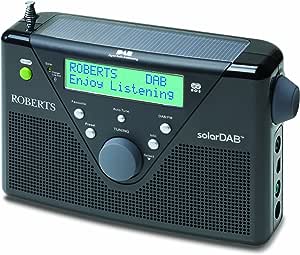 Brand: Roberts Radio
4.5 out of 5 stars 491 ratings
Secure transaction
Returns Policy
Your transaction is secure
We work hard to protect your security and privacy. Our payment security system encrypts your information during transmission. We don’t share your credit card details with third-party sellers, and we don’t sell your information to others. Learn more
Currently unavailable.
We don't know when or if this item will be back in stock.

4.5 out of 5 stars
4.5 out of 5
491 global ratings
How are ratings calculated?
To calculate the overall star rating and percentage breakdown by star, we don’t use a simple average. Instead, our system considers things like how recent a review is and if the reviewer bought the item on Amazon. It also analyses reviews to verify trustworthiness.

william E
1.0 out of 5 stars Not worth the money - DONT BUY!
Reviewed in the United Kingdom on 6 April 2020
Verified Purchase
I hope Amazon read these reviews as well!
I bought the Roberts Solar DAB 2 radio for two reasons, brand reputation and for the ability to solar charge. My wife is caring for C-19 patients in one of the London Hospitals and is having to stay in nursing accommodation (Infection Risk). There is great demand for the one or two plug sockets that they use. So thought a solar radio would be ideal. The problem is that it only seems to hold a charge on the new rechargeable batteries of about an hour, not the 20 hrs as stated in the instructions. I tried to contact Roberts by phone and email and am still waiting for a reply.
All I can say Roberts if this is how you build radios, I hope you have nothing to do with building ventilators.
Sorry Amazon if I do not hear anything back from Roberts this will be a return.

Bookworm
3.0 out of 5 stars A very nice radio, but disappointing vibrations at higher volumes.
Reviewed in the United Kingdom on 4 September 2016
Verified Purchase
This is a really nice radio. I use it in the garden during the summer months, and it keeps agreeably charged in the sunlight. But I keep the charger handy, and sometimes have to top up once in a while. The sound quality is excellent, and is very rich in the base, which I think is the reason why the battery cover vibrates when I have the volume any higher than modest-to-medium. A bit of a nuisance when I want to listen at higher volumes, such as when I am in the kitchen, and the radio must compete against the sounds of boiling kettle and microwave fan. When I press my thumb against the battery cover, the vibrating ceases, so I am looking out for a very thin bit of foam, which if positioned tightly under the cover, will stop the buzzing noises.

UPDATE. I used a piece of folded tissue paper to jam between the batteries and the flap/door thing. This is only somewhat successful, but does reduce the buzzing and vibrations that otherwise would occur, but does not suppress them for loud volumes. This is sufficiently annoying for me to get another radio for when I want louder volumes. Not a Roberts, though.

MR FANTASTICO
5.0 out of 5 stars Great product, nice design and works very well for me.
Reviewed in the United Kingdom on 20 March 2016
Verified Purchase
I like it, a great little radio. I mainly listen to speech on it, so I couldn't really comment about its musical performance, but it has a single 2 ish inch speaker, so its a trade off for weight, size cost and portability! But great for me for speech radio. To me it sounds fine, not boxy or tinny at all.
Good points:
A matter of opinion but it looks nice, better than in the picture, it appears and feels well made. The press buttons also feel good quality (I'm fussy!).
It has a proper volume DIAL no stupid pressy buttons for the volume.
On DAB it takes a very acceptable 3 seconds to start up.
In the pics the solar panel seems to dominate the design, it almost put me off, but again it looks absolutely fine in reality.
Reception in my poor recception area is excellent, previous radios failed dismally in the very same spots in my house where this beast works just fine, I occasionally have to pull the aerial out a bit but that is no problem at all.
The display is large, bright and clear, it illuminates for a few seconds when you turn the thing on and when you change the stations, a good idea.
I use it 10 - 30 minutes a day on speech radio mainly, set fairly loud (its a big room) its never going to deafen anyone but it can go well beyond more than loud enough for me without the sound deteriorating. I put it in the window facing south,and despite the winter daylight it charges from the available daylight just fine, I got it around december, use it everyday, and in mid March I have never had to charge it with the mains charger, the daylight it gets has charged it just fine! Obviously I don't know if I'm using 10% or 99% of the available charge.
The sound is nice and clear, some have said its a little bassy, but I haven't noticed that, there is no adjustment for bass and treble but I don't think its necessary on a unit like this.
I like the dial you can turn through the available channels on DAB and just press to select, and the autotune setup worked so well I don't even remember pressing it.
i PARTICULARLY like the "favourite" button, I have it set to a DAB channel and it always goes to the correct station even if it is on FM and not DAB. - nice touch.
I like the addition of the low battery LED. It hasn't gone flat yet but I appreciate the warning!
The display shows the station you are listening to and the time and date which i like, or a bit of blurb about the radio station.
Its small, light and portable, and I never need to charge it!
One major plus with Roberts radios in particular, it might not sound like much but on DAB the 4 I have dotted around the house are all in sync, that is, the audio does not have the irritating few second difference I used to get with other radios in the past.

Not so good but not really that bad points:
I'm being picky, but the "preset" took a little getting used to, but ok once I got used to it, with preset "off" the tuning dial goes through all the DAB channels, and with preset "on" (A big heart symbol on the display) the tuning dial goes through the stored presets only. After getting used to it it works well, and I suppose you can more easily have lot of presets stored (I don't know how many it can hold, but I have 6 set and thats all I need) and maybe its better than it brisling with preset buttons.
Thanks to probably clumsiness occasionally when I pick it up to wander around with it I hit the power button. Always at a crucial moment! Aaagh!
I wish they had said more clearly on the amazon writeup it has batteries in the box, on the amazon page it says "Batteries 3 Lithium ion batteries required" so I ordered them separately, and further down the page it said "Uses 3 x LR6 (AA size) batteries or rechargeable equivalent (included)" which I didn't read. Something like "Yes, it comes with batteries, stupid" at the top would have been handy for me.

Also if you use rechargeable batteries which I guess almost all will, make sure the switch inside the battery cover is set to the correct type. Not sure exactly what it does but what I know about batteries its important to charge them correctly.

I had a black model but wish now I'd been a bit more imaginative and got a brightly coloured red or green one! Oh well, i could always buy another one...
Read more
22 people found this helpful
Report abuse

danfoto
5.0 out of 5 stars Excellent radio but do check the setting of the battery type switch!
Reviewed in the United Kingdom on 2 September 2016
Verified Purchase
Excellent little radio which does exactly what it say on the tin. Would-be purchasers might like to note that

1 It's a doddle to set up and use
2 You can download the user manual from the Roberts site to find out more before you buy
3 Roberts do make excellent radios, but who else would supply NiMH rechargables with a radio which has the battery type selector switch set by default to "Alkaline"? I bet they get a lot of buyers complaining that theirs doesn't charge the batteries ...
Read more
16 people found this helpful
Report abuse
See all reviews
Get FREE delivery with Amazon Prime
Prime members enjoy FREE Delivery and exclusive access to movies, TV shows, music, Kindle e-books, Twitch Prime, and more.
> Get Started
Back to top
Get to Know Us
Make Money with Us
Let Us Help You
And don't forget:
© 1996-2020, Amazon.com, Inc. or its affiliates