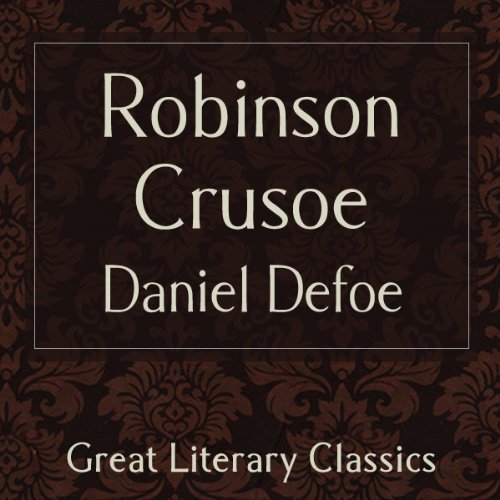 The story is a fictional autobiography of the title character, an English castaway who spends 28 years on a remote tropical island, encountering Native Americans, captives, and mutineers. This is the tale of an ordinary man struggling to survive in extraordinary circumstances. Robinson Crusoe wrestles with fate and the nature of God.

Please note: This is a vintage recording. The audio quality may not be up to modern day standards.

4.4 out of 5 stars
4.4 out of 5
2,545 global ratings
How are ratings calculated?
To calculate the overall star rating and percentage breakdown by star, we don’t use a simple average. Instead, our system considers things like how recent a review is and if the reviewer bought the item on Amazon. It also analyses reviews to verify trustworthiness.

Clare Fisher
1.0 out of 5 stars Badly translated text!
Reviewed in Australia on 5 April 2020
Verified Purchase
I don’t know how this book can be badly translated (seeing as it was written in English to begin with) but it gives the impression it has been translated from English, to Swahili back to English. One paragraph in and nothing was making sense. Want my money back.
“ I was born within the yr 1632, inside the metropolis of York, of a good family, even though not of that u . S ., my father being a foreigner of Bremen, who settled first at Hull.  He got an amazing property via products, and leaving off his trade, lived afterwards at York, from whence he had married my mother, whose relations have been named Robinson, a excellent circle of relatives in that country, and from whom I changed into referred to as Robinson Kreutznaer; but, via the usual corruption of phrases in England, we are now called—nay we name ourselves and write our call—Crusoe; and so my companions usually known as me.”
Read more
Helpful
Report abuse

Kindle Customer
3.0 out of 5 stars Average
Reviewed in Australia on 14 July 2017
Verified Purchase
It seemed like the writing was emotionless.

Considering the time it was written, I was expecting richer language.

Terry Harris
1.0 out of 5 stars Rubbish
Reviewed in Australia on 9 June 2020
Seems as if has been translated into Chinese and back into English! Doesn't Kindle have proof readers? Have found similar issues in other books. Please stick to tbe original rext!
Read more
Helpful
Report abuse
See all reviews

Amazon Customer
4.0 out of 5 stars I hated this book with a passion
Reviewed in the United Kingdom on 8 April 2017
Verified Purchase
I hated this book with a passion. This was my very first set book in English Lit. in secondary school in the '50s ( aged 11 ) and the very first homework was to read the first 100 pages for a test the following week. Having been brought up on a diet of Enid Blyton, Malcolm Saville, Arthur Ransome, Frank Richards, and some RLS etc, I struggled with the archaic style, long sentences, and so on, and failed miserably. I vowed never to touch the book again.

Fast forward sixty years and I thought I should give it another try. I now find it very readable, interesting and even enjoyable. So never say never! The version I bought is from the hard cover, Collectors' Library edition. These books are a handy pocket size and smart looking with gilt edged pages, a page saver ribbon, and a durable spine. On the down side, the print is necessarily small and some may have difficulty with this size font. Maybe a touch expensive at £8.99, when you can get a paperback copy for £2.00 or less, but okay if you intend to keep it.
Read more
15 people found this helpful
Report abuse

Daphne Loads
1.0 out of 5 stars This is a rip-off
Reviewed in the United Kingdom on 27 September 2020
Verified Purchase
I know I only paid 1.99 GBP, but even so what a horrid surprise....This is not Robinson Crusoe, written in English by Daniel Defoe. It looks to me like a foreign version that has been translated back into English via Google Translate or similar. The opening, instead of "I was born in the year 1632, in the City of York, of a good family, tho' not of that Country..." reads "I changed into born in the 12 months 1632, within the city of York, of a superb family, no matter the reality that no longer of that america...." Don't be put off if English is not your first language.
Read more
5 people found this helpful
Report abuse

Jon Gleur
4.0 out of 5 stars Good edition, intro, notes all fine - a few niggles about the layout
Reviewed in the United Kingdom on 1 June 2020
Verified Purchase
I can recommend this edition for the clear print and excellent intro and biographical and textual notes and exhaustive bibliography that made me curious to read the rest of Defoe's work. The only problem is that these various sections are strewn around the book (both for'ard and aft :-) so as to make a close reading dependent on a system of several simultaneous bookmarks. I also missed the presence of a modern map, and the small repro of Crusoe's own map of his voyages definitely deserves a further commentary in itself and a clearer modern version of it. (The reader who is not clued up will find it difficult to work out where Crusoe was allegedly stranded, and yet that map with more detailed map inserts would be so easy to supply these days.) But these are the niggles of a rather untypical reader.
Read more
One person found this helpful
Report abuse

GO
1.0 out of 5 stars Boring text, poorly read
Reviewed in the United Kingdom on 21 September 2017
Verified Purchase
It's easy to forget quite how boring the unabridged Robinson Crusoe really is.

Occasionally adding in a reading from a Jehovah's Witness pamphlet that had come through the door.

That would be equivalent to much of what this offering comprises.

And Tom Casaletto may well be an estimable voice actor in his own milieu, but as a purveyor of an "English" accent and style of reading he is toe-curling.
Read more
2 people found this helpful
Report abuse

still searching
5.0 out of 5 stars Paradise found? Grand designs - early Eighteenth Century style!
Reviewed in the United Kingdom on 2 November 2012
Verified Purchase
I first read this many decades ago after watching the excellent BBC serial on children's television that I think was a French production. Coming back to it all these years later I'm struck, once again, by how, although appearing slightly `overblown' for some modern tastes, engaging the writing is and how the story of this young man's gruelling coming of age still resonates down the centuries. Thus, one understands why the book quickly attained classic status and remained a favourite for more than 300 years.

According to Colin Wilson (in A Criminal History of Mankind) Defoe based the story on the adventures of a Scottish pirate named Alexander Selkirk who, following a quarrel with his pirate captain, asked to be marooned on what was then, one of the uninhabited islands of the Juan Fernandez group about 600 km off the coast of Chile in the South Pacific. After five years Selkirk return to England and became an overnight `celebrity' and Defoe (who began life, in 1660, as Daniel Foe) went to see him in Bristol in 1713 and probably paid for his written reminiscences. The interesting point to note is that Defoe was an agent provocateur and spy, a kind of forerunner to those more recently employed by MI5, and built up a network of spies as well as spending time `inside' and in the pillory!

Why it's interesting, at least to this reader, is that this seems to indicate a certain type of person; i.e. not particularly pious, unlike his fictional creation Robinson Crusoe, who, during his long solitary sojourn on his fictional island, develops, possibly, quite understandably under the circumstances, a distinct religious sensibility and frequently and at length thanks God for providing for him so bounteously. Crusoe reflects on this many times during the book and this is just one example of a degree of repetition that a good editor would surely have remedied.

Nevertheless, this book is a classic for a good reason and provides hours of enjoyment for the patient reader in addition to a great deal of food for thought!
Read more
3 people found this helpful
Report abuse
See all reviews
Back to top
Get to Know Us
Make Money with Us
Let Us Help You
And don't forget:
© 1996-2022, Amazon.com, Inc. or its affiliates