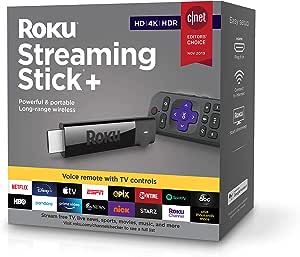 Brand: Roku
2.7 out of 5 stars 7 ratings
| 3 answered questions
Secure transaction
Returns Policy
Your transaction is secure
We work hard to protect your security and privacy. Our payment security system encrypts your information during transmission. We don’t share your credit card details with third-party sellers, and we don’t sell your information to others. Learn more

Exceptional wireless. Stunning picture quality. Start watching your favorites quickly and enjoy a smooth streaming experience. Whether you’re streaming in your home, hotel or even in the backyard, the advanced wireless receiver gives you 4x the range and a stronger signal for streaming. This means you can stream in places that are ordinarily too far from the router. Stream in brilliant 4K, HDR and HD. Experience the visual rush of 4K and vibrant HDR picture quality with the new powerful and portable streaming Stick Plus . plus, no more juggling remotes. Our new voice remote with buttons for TV Power and volume control makes it easy to control both your TV and streaming Stick Plus . Enjoy 500, 000 Plus movies and TV episodes across thousands of free or paid channels. You can even search by voice across top channels by actor, show and more. TV Compatibility HD TVs – Up to 1080p (1920 x 1080) with up scaling from 720p. 4K UHD TVs – Up to 2160p at 60fps (3840 × 2160) with up scaling from 720p and 1080p. TV must have an HDMI input that supports HDCP 2.2. 4K UHD HDR TVs – Supports HDR10. TV must have an HDMI input that supports HDCP 2.2

2.7 out of 5 stars
2.7 out of 5
7 global ratings
How are ratings calculated?
To calculate the overall star rating and percentage breakdown by star, we don’t use a simple average. Instead, our system considers things like how recent a review is and if the reviewer bought the item on Amazon. It also analyses reviews to verify trustworthiness.

Nick P.
3.0 out of 5 stars Limited Functionality in Australia
Reviewed in Australia on 12 August 2018
Verified Purchase
Not getting involved in all the various VPN and IP spoofing stuff then this is rather useless in Australia with nothing much beyond Netflix and Youtube.
Yes, you can fake a location and register in the US but then the stick knows it is not there and won't let you use app after app.
If you want Amazon Prime and Netflix a simple Fire Stick is much better value.
Read more
13 people found this helpful
Helpful
Report abuse

cedric24
1.0 out of 5 stars how to make it work
Reviewed in Australia on 21 February 2021
Verified Purchase
when we tried to get it going the only possible assistance significant charges and no way to believe they had a clue came from a source with no validity in my experience. Curiously we have supposedly being refunded the amount paid to Amazon as " the delivery contractor had lost the stick. No amount has appeared in my account to date. I am iclined to believe I have been subjected to a complicated scam.
Read more
Helpful
Report abuse

Hivemind
3.0 out of 5 stars Good device with limits for non-US
Reviewed in Australia on 30 August 2018
Verified Purchase
The device works well for apps that don't have geofencing. The Roku website doesn't tell you which market you are in (I was using a web proxy based in the US) but fails to install many of the apps. There's no way to see what country you belong to and which apps are geofenced.
Read more
3 people found this helpful
Helpful
Report abuse

Mila
5.0 out of 5 stars Great product
Reviewed in Australia on 5 May 2020
Verified Purchase
It's great
Read more
Helpful
Report abuse

Amazon Customer
1.0 out of 5 stars Total Rubbish
Reviewed in Australia on 28 December 2020
Would not connect to our wifi even when it was only 30cm from the router. We checked all the recommended advice from Roku and tried three different routers and different networks, it would not connect. The kids damaged the packaging so we can't return it.
Read more
Helpful
Report abuse
See all reviews

Patti S
1.0 out of 5 stars Buyer Beware - Please Read This Before You Buy
Reviewed in the United States on 24 November 2018
Verified Purchase
BUYER BEWARE - I've purchased Roku players in August 2012, May 2015, and this new Stream Stick+ in 2018. When I had a problem "activating" my new Streaming Stick+, I was given a number to "Contact Support Toll Free to Activate Instantly". I called the number and was told that since I had already registered 2 other Roku devices, in order to Activate this 3rd device, I would need to pay $70.00 to have a PREMIUM account. I told them that I didn't need nor want a PREMIUM account. I asked the customer service rep, to deactivate the first Roku I purchased in 2012 and then I would only have 2 registered devices on my account. I was told that - (1) Even if I deactivated a previous Roku player or (2 )if I opened a new account, I would still have to pay the $70.00 in order to register my Streaming Stick+ .
So that is how Roku rewards it's returning long-time customer, by charging them a fee of $70.00 to activate more than 2 of their Roku devices! So, in addition to paying for the device itself, you now have to pay an extra $70.00 to use it!!!
I am hoping this review will alert other potential buyers to Roku's new policy of rewarding their repeat customers.
Patti
Read more
7,248 people found this helpful
Report abuse

Fanofsam1
1.0 out of 5 stars Technical Support holding my Roku device hostage...I am returning it!
Reviewed in the United States on 12 August 2018
Verified Purchase
We bought this Roku Streaming Stick+ thinking that all we had to do was plug it in and follow instructions. WELL NO! We have a Samsung Smart tv with numerous HDMI slots. We tried ALL of them and the update on the Stick would not load! We kept getting a 005 Network Error. I chatted online with "Ray". He stated that I would have to pay Technical support $69 to update the Stick+ . He explained that there have been too many errors updating their products so the company decided that the customer cannot update their new devices on their own and will now have to pay someone to do it for you! NOWHERE in the reviews I read did anyone state that I would be paying an additional $69 to use this device! So here I have a brand new device which costs $65 and now Roku wants to hold that item hostage and render it useless unless I fork over $69 for an update AND oh yes...that $69 would give me 6 months of free tech support! Yay!? Not gonna happen. I will NEVER purchase an item from this company again. They are way out of their league charging for technical support for an update to a brand new device.
Read more
3,695 people found this helpful
Report abuse

K. Krueger
5.0 out of 5 stars From a value perspective, this might be the best Roku yet...
Reviewed in the United States on 21 October 2017
Verified Purchase
I'm a long-time Roku user, having purchased devices from every generation throughout Roku's evolution. I've had the very original Roku N1100, Roku 2 XD, Roku 2 XS, Roku 3 (2013 version), Roku 4, a TCL Roku TV, Roku Ultra (2016 version)...and now this Stick +. While I've only had it for a couple of days now, this might be the best Roku I've seen from a value perspective.

My house is a Roku house. We have 5 televisions but don't have a cable or satellite subscription.. One of the TV's is a Roku TV and the other 4 all have a Roku attached to them. Literally everything we watch is delivered via the Roku. Our OTA material is delivered from a Tablo DVR to our Rokus. Our local media is served up via a Plex server to the Rokus. We also have PS Vue, Netflix, Amazon video, etc. etc. Bottom line, we use Roku a lot, and I'm very familiar with them. I wouldn't consider myself to be a Roku "fan boy", though. While most of the Roku's I've had have been great...there have been some clunkers. The Roku 2XS was a turd that never got any better. The Roku 4 was a turd at the start, but gradually got better with each subsequent firmware update. Unfortunately, the cooling fan in one of my Roku 4s (The 4 was the only Roku model to ever have one) has begun to make the dreaded "grinding" noise in recent weeks, so I decided to try replace it with a stick+.

So, after a couple of days with the Stick+...here are my thoughts on this device

- It's snappy and smooth. It's maybe not quite as quick as my Roku Ultras...but it's every bit as fast as the Roku 4.
- The new remote is great.The ability to control the TV's power and volume without a second remote or a universal remote is loooong overdue.
- Excellent wireless reception. I had two walls between the Stick+ and my router, but was easily streaming 16mbps local media through Plex.
- Powering via the TV's USB isn't optimal. Assuming your TV stops providing power to the USB when turned-off, the Stick+ will have to go through the boot-up sequence and then connect to your wireless before you can do anything with it each time you turn on your TV. This can take ~30 seconds. I highly recommend plugging it directly into an outlet using the provided adapter.

So, this is a great Roku device. It doesn't have the same bells-and-whistles that my Roku Ultra's have...but then again, I also paid nearly twice as much for those. This Stick+ is much cheaper, provides basically the same UI/playback performance, and also has a remote that will make having to juggle your Roku and TV remotes a thing of the past. That's why I say, absent some deal-breaker that I haven't encountered yet, this is the best dollar-for-dollar Roku yet.
Read more
1,431 people found this helpful
Report abuse

Andrew
5.0 out of 5 stars Vastly superior to Amazon devices
Reviewed in the United States on 3 February 2018
Verified Purchase
I purchased the Streaming Stick+ after having repeated difficulties and problems with the Amazon Fire TV Stick. The difference in quality between these two products is astounding. While the Fire TV Stick required constant reboots and had consistently poor network performance, the Roku has been flawless and completely without problems. The addition of 4K support is a huge bonus. I'm especially impressed with the connectivity. My room, where I'm using the device, is on a different floor, on the other side of the house from our router, but I've never had an issue with connectivity or performance.
The menu/interface is a little outdated, but I'd gladly sacrifice a flashy menu for good performance. It's astounding to me what a bad product the Fire TV Stick was now that I've switched to Roku. I enjoy the wide selection of channels as well - every streaming service seems to be available through Roku. The voice functionality on the remote works well, and I like that I can turn my TV on and off with the Roku remote as well as adjust the volume. All in all it's an awesome product.
Read more
793 people found this helpful
Report abuse
See all reviews
Back to top
Get to Know Us
Make Money with Us
Let Us Help You
And don't forget:
© 1996-2021, Amazon.com, Inc. or its affiliates