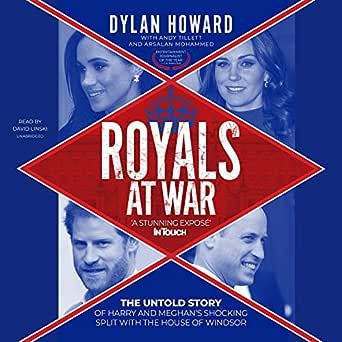 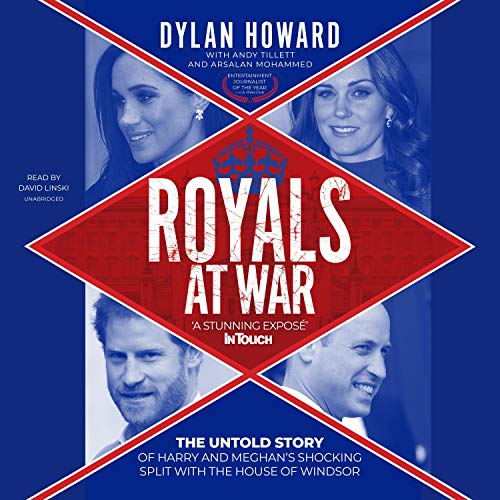 Royals at War: The Untold Story of Harry and Meghan's Shocking Split with the House of Windsor

3.9 out of 5 stars
3.9 out of 5
807 global ratings
How are ratings calculated?
To calculate the overall star rating and percentage breakdown by star, we don’t use a simple average. Instead, our system considers things like how recent a review is and if the reviewer bought the item on Amazon. It also analyses reviews to verify trustworthiness.

Nita
5.0 out of 5 stars Birthday Present
Reviewed in Australia on 30 August 2020
Verified Purchase
My mother is a real book worm, so I got her to read the book to make sure it was worthy enough to give as a gift,
This book worm spoke with great respect for the soucing of excellent collective information written, and in general, I cannot put this book to one side.
Read more
Helpful
Report abuse

Peter
1.0 out of 5 stars There's nothing new or explosive in this book.
Reviewed in Australia on 29 November 2020
It's far too expensive for what is just a rehash of other people's writing.
Read more
Helpful
Report abuse
See all reviews

Jackson Jones
2.0 out of 5 stars Absurd Markle Hagiography
Reviewed in the United Kingdom on 1 July 2020
Verified Purchase
For two people who pride themselves on their “investigative journalism” they’ve done no investigating at all. I am halfway through the book and they have just opined that, in contrast to Kate prior to her marriage to William, Markle had “charity coming out of her ears”. Who on earth told them that? Meghan Markle did no charity work whatsoever until, aged 33, she engaged the services of a PR company who organised a few charity events for her to help raise her non-existent public profile. If you add up the small amount of “charity work” she actually did it amounts to less than two weeks worth. Ever boastful & painfully narcissistic, she chose to characterise these very few achievements as “lifelong activism” but there’s no sensible reason why these sychophantic clowns should give it credence. One speech to the UN (about herself) one speech to One Young World (about herself), one short trip to Rwanda followed by a glowing self-penned article (about herself) and three days in India learning about an initiative she had previously claimed in the media she’d set up by herself, but hadn’t. That’s it. That is all this self-promoting woman has ever done...and this is “charity coming out of her ears” & “lifelong activism” on behalf of women? Get real.

And they are flat out wrong when they claim that the Queen “offered” Archie a title and an HRH, but was turned down. Archie automatically has a title as the son of a Royal Duke (he is the Earl of Dumbarton - he’s just not styled that way) and he is not entitled to an HRH until Charles is on the throne, at which point he’ll automatically be a prince & an HRH. The Queen would have had to change the law to give him one at birth, and why should she? Perhaps this book is a good example of why Americans shouldn’t write books about the British royal family.

And I have to assume these two men are American? If they are British then shame on them for painting Markle’s desperation to weigh in on political matters & being prevented by the royals as somehow unfair.. The British Royal Family are NON-POLITICAL BY LAW. Don’t they understand that? Meghan Markle wanted the platform her marriage gave her but had not the slightest intention of playing by any of the rules everyone else has to. Her wings were not clipped by anyone...she gladly yanked them off by herself in return for worldwide fame, a fabulous wardrobe, a £35m wedding and a free house. So she wanted to weigh in on issues she probably knows nothing about? Tough. She should have made a play for Jeff Bezos or Elon Musk instead.

And yet again the absurd & insutling charge that the British media are racists. 99% of that woman’s coverage in all the tabloids, broadsheets & magazines was glowingly positive. Her mother (a black woman) has taken on a saintly, wise woman persona thanks purely to her coverage in the “racist” British press. No, Markle’s rudeness, overwhelming sense of entitlement, showboating & hypocrisy is what has bought her negative press articles. She and that non-entity she married are the architects of their own downfall - and for these idiot writers not to see that is ridiculous.

Don’t bother with this book unless you want to be dripped in Markle sugar. It’s a hagiography, not a genuine expose.
Read more
229 people found this helpful
Report abuse

L. Ellis
1.0 out of 5 stars Oh dear!
Reviewed in the United Kingdom on 30 June 2020
Verified Purchase
Only a few pages in and already he says that King Edward VII abdicated and calls the Queen Her Royal Highness. Doesn’t give me much hope for the accuracy of the rest of the book!

Continuing reading. There are so many factual errors. This is a really sloppy book.
Read more
144 people found this helpful
Report abuse

LindseyB
1.0 out of 5 stars The authors clearly don't know their subjects
Reviewed in the United Kingdom on 2 July 2020
Verified Purchase
I've only read 5% of the book and already it claims that Harry was 3rd in line to the throne, and then that Christmas is spent at Buckingham Palace whereas the family go to Sandringham. Utter tosh.

I'm now at 70% and it hasn't got any better. I thought I was buying a well researched book about H&M (not the clothing store!). Where the Middletons came from wasn't in the title nor was William and Kate meeting/splitting up/getting back together/moving to Anglesey blah blah blah - and it's still full of errors. Harry's course at the Royal Military Academy in Sandhurst was postponed due to injury then we read that he was going to Sandringham. The author,s and their subjects if they had anything to do with it, should be embarrassed. Terrible.
Read more
93 people found this helpful
Report abuse

Kindle Customer
1.0 out of 5 stars This book is a quick cash in.
Reviewed in the United Kingdom on 2 July 2020
Verified Purchase
Was looking forward to reading but so many mistakes and wrong information makes it read like a quick cash in book. Really not recommended.
Read more
66 people found this helpful
Report abuse

Mauve Peace
1.0 out of 5 stars Old wine in a new bottle
Reviewed in the United Kingdom on 7 July 2020
Verified Purchase
This book has obviously been written to make a quick buck. Superficial, zero research oe depth. For example, they glibly state Meghan suffered race discrimination at school. If they had done research at all they would have discovered 66% of the school was 'ethnic minority' so the idea she was 'the only black face' is laughable.

They quote the 'bleeding obvious' as in Victoria Arbiter saying the pair missed a trick in not posing for baby photos early and would have endeared them more to the public. They didn't bother to delve into the question, in that case WHY did they snub the public.

What really annoyed and bored me was that there then followed a potted bio of the entire royal family all the way through to the death of Diana and how Carole met Michael Middleton. YAWN. Nothing you haven't read a million times before.

At £14 for the Kindle download, this is just someone out to make a quick buck out of 'cut and paste'. No research, no insight, no depth, nothing new.

SAVE YOUR MONEY!!!
Read more
59 people found this helpful
Report abuse
See all reviews
Back to top
Get to Know Us
Make Money with Us
Let Us Help You
And don't forget:
© 1996-2021, Amazon.com, Inc. or its affiliates