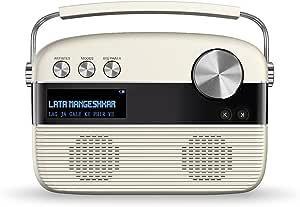 4.1 out of 5 stars
4.1 out of 5
2,737 global ratings
How are ratings calculated?
To calculate the overall star rating and percentage breakdown by star, we don’t use a simple average. Instead, our system considers things like how recent a review is and if the reviewer bought the item on Amazon. It also analyses reviews to verify trustworthiness.

rameshwari
1.0 out of 5 stars Gets Stuck
Reviewed in Australia on 30 June 2020
Verified Purchase
Bought the unit two times in the hope of getting a working unit.
It failed both the times. The unit gets stuck at one particular song “Rhimjhim ke Tarane”.
Found it too annoying to see the same defect in both the units. We paid shipping and returned the units. Loss of $67 in shipping

Ajay KS
5.0 out of 5 stars Overall a Good Digital Media Player. Gold for Senior Generation.
Reviewed in India on 29 January 2019
Verified Purchase
Build quality and finish is very good and it is still light weight. Sound quality is above average - suits for the music it holds. It is very easy to operate. The provision of FM, blue-tooth and USB inputs gives good expandability.
The collection of songs is above average. Since HMV to RPG, they've the best repository of bollywood music but they do not have good understanding of making nice collections of songs. Their lack of this skill helped Gulshan Kumar made T-Series a grand success. Since the age of cassettes to this beautiful piece of digital music player, I've always found some baggage in their choice of collection. Sometimes it feels they push their choice than what listeners want. Sometimes, it looks they want to push some songs just because they've paid for rights of the whole set.
The Set went blank once and they promptly replaced after call to customer care and some basic diagnosis over phone. This was during warranty period. I got it from Amazon as no store was even aware that such a product has been launched. Now a days, I see a lot of Carvaan boxes on so many stores. Selling network is good now, and I hope service network is as good after warranty is over.
Overall a very good product - this is the (almost) best thing they could have done with the golden collection they've. This is a perfect all in one portable device with a good collection for senior generation. I still find Amazon Prime Music collection a good add-on for so many rare songs that I did not find in many other repositories. With Prime Music and Carvaan, I've got the best of both worlds.
Edit: In this old review, one of the first things I mentioned is that the sound is above average and suits the music it HOLDS. You buy this for pre-stored bollywood OLDIES. Saw a lot many reviews complaining about sound. If anybody buys this as bluetooth or aux speaker, it's a wrong choice. You can get much better speakers under this price. Even an F&D at half this price will give you better bass. Know what you want before reading what they sell... any product.
I bought this as a package. Also saw a lot of reviews about bad product. Either build quality has drastically degraded (shouldn't be the case, I guess, as half a dozen people I know did not face any such issue, except me and I mentioned that replacement experience) - or retailers might be spamming Amazon, but then most of these are verified purchasers! So think twice before you make choice. Prime Music with any ubiquitous bluetooth portable speakers (check jbl go or portonics sound drum or once with similar ratings) can give similar or better results.

Ankush
1.0 out of 5 stars Stopped working in 5 months.....
Reviewed in India on 27 July 2018
Verified Purchase
I purchased it as gifts for mother.....that something she cud enjoy for once.......just after 3 months of purchase volume control stopped working......and now....saregama mode stopped working......can't even load 1 of 5000 songs now......I need replacement as soon as possible........
Read more
89 people found this helpful
Report abuse

Sakshi Grover
1.0 out of 5 stars Embarrasing Experience EVER
Reviewed in India on 21 April 2019
Verified Purchase
I wish there was a negative scaling as well.
*** Read with Patience to avoid embarrassment and unnecessary hassle! ***
I brought two pieces of Saregama Caravan on 27th July, 2018. Lately, we discovered that the USB of one of the pieces is not working. In order to file a logical complaint, we called the customer care number “18001027799” on 10th March, 2019. A service guy came on 14th march, he did his work-around and made the USB function in-front of him, The moment he left, the USB stopped working again. We filed the re-complaint again on 30th march, the service guy came on 4th April and told us that some of the parts are not working; also he doesn’t have the same with him right now and would have to buy and then repair the system. It has been 20th April, there is NO SIGN of anyone coming soon to repair the set. We have already called and complaint about it to the customer center thrice; the support staff is un-cooperative and barbaric in every sense. First the repair guy appears AFTER DAYS SINCE INITIAL COMPLAINT. And now, there is no sign of anyone coming with the new parts. The last time we called, we told them that we will take this up on the social media, and all they could reply was - do as u wish, the parts will take time.
ALSO NOTE : THE FM DOESN’T WORK FOR BOTH THE SETS, AND THE SERVICE GUY HIMSELF SAID IT NEVER DOES.
In short, their post-buy service SUCKS! Big TIME! These big conglomerates don’t understand the value of Rs. 6000 for a common man. It’s been close to a month now, will I ever get the service I require ????? Will I ever get the service that is in my right! !!! Not to mention, this is happening when the set is in warranty! God knows what happens, when it is not!! Serial Number : WH04183011119826. Buying this product is just waste of time and energy for anyone who wants to live a peaceful life.
And I did see other reviews on google for this; even though the higher popularity reviews are there, I could see some people referring to the technical issues appearing with the products and the customer service. And I am glad, I am not the only one pointing this out.
They say, an old customer is 6 times more worth than a new customer; rest assured, you have lost an extremely loyal customer forever. Such pedestrian behavior towards customer service is soooo not acceptable in any dimension.
Read more
60 people found this helpful
Report abuse

Lokesh S.
2.0 out of 5 stars Try buying another speaker and teach your parents to use a Music app on their phone instead!
Reviewed in India on 7 January 2018
Verified Purchase
I got the product replaced once which arrived in a defective condition because the battery wouldn't work for more than 30-40mins and then the replacement I've received now has a problem with its FM player (doesn't scan networks at all). Durability is a serious issue with this product. The song collection si great but the product itself isn't worth the hype.
Read more
159 people found this helpful
Report abuse

Mr Jagdev Singh Raizada
1.0 out of 5 stars Saregama carvaan
Reviewed in the United Kingdom on 14 April 2018
Verified Purchase
Not much impressed..... remote control does not work and some songs are repeated and if you want to hear a particular song you can’t find instantly the quality is not so good as expected also not worth for what you pay a bit disappointed sorry
Read more
8 people found this helpful
Report abuse
See all reviews
Pages with related products. See and discover other items: Best Rated in MP3 & Digital Audio Players
Get FREE delivery with Amazon Prime
Prime members enjoy FREE Delivery and exclusive access to movies, TV shows, music, Kindle e-books, Twitch Prime, and more.
> Get Started
Back to top
Get to Know Us
Make Money with Us
Let Us Help You
And don't forget:
© 1996-2020, Amazon.com, Inc. or its affiliates