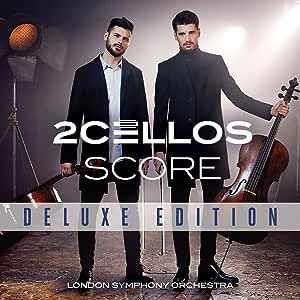 Secure transaction
Your transaction is secure
We work hard to protect your security and privacy. Our payment security system encrypts your information during transmission. We don’t share your credit card details with third-party sellers, and we don’t sell your information to others. Learn more
Details
Ships from
Amazon AU
Sold by
Amazon AU
New (7) from
$22.99 FREE Delivery on first order.

2CELLOS, music s most electric and dynamic instrumental duo, go to the movies for their latest album, Score. Bringing 2CELLOS game-changing sound and style to the most popular melodies ever written for classic and contemporary movies and television, Score finds Croatian cellists Luka Sulic and Stjepan Hauser exploring a more traditional sound-world. Joining them here is the London Symphony Orchestra with conductor/arranger Robin Smith at the helm. The album is co-produced by Sulic and Hauser with Nick Patrick (Jackie Evancho, Il Divo, Placido Domingo). On Score, themes that drove some of the biggest block-busters in film and television history are featured in fresh new treatments including an arrangement of Ramin Djawadi s melodies that score Game of Thrones, Oscar-winning themes from James Horner s Titanic ( My Heart Will Go On ), John Williams Schindler s List and Vangelis s Chariots of Fire, as well as For the Love of a Princess from Braveheart (also by Horner); May It Be from The Lord of the Rings: The Fellowship of the Ring (introduced in the film by Enya); the inspiring Now We Are Free from Gladiator, by the film s composer Hans Zimmer, Lisa Gerrard and Klaus Badelt and more.


About the DVD Score...And More

2CELLOS perform with the prestigious Sydney Symphony Orchestra at the iconic Sydney Opera House in Australia on their new live concert DVD, Score...And More. The concert features 2CELLOS, Luka Sulic and Stjepan Hauser, performing music from their current album, Score, along with their greatest hits. The Score...And More DVD includes some of the world s most beloved film and television music from Lord of the Rings, Braveheart, Breakfast at Tiffany s, The Godfather, Titanic, Schindler s List and Game of Thrones along with 2CELLOS fan favorites, Michael Jackson s Smooth Criminal , The Rolling Stone s Satisfaction, AC/DC s Thunderstruck and Highway to Hell and more. The Score...And More concert will air nationally on PBS in September.

4.7 out of 5 stars
4.7 out of 5
947 global ratings
How are ratings calculated?
To calculate the overall star rating and percentage breakdown by star, we don’t use a simple average. Instead, our system considers things like how recent a review is and if the reviewer bought the item on Amazon. It also analyses reviews to verify trustworthiness.

Dorset Steve
5.0 out of 5 stars I will simply say that if ever music and talent were in some way divinely inspired, these two are.
Reviewed in the United Kingdom on 12 July 2020
Verified Purchase
Luka Šulić and Stjepan Hauser are two classically trained cellists who are taking their instrument to a higher level than ever before. They are hyper-talented, have a great way of interpreting all-to-familiar tunes, and taking the listener on a journey that is so refreshing, exciting, and thrilling. I can't recommend 2CELLOS highly enough. It is nectar for the ears.
Read more
3 people found this helpful
Report abuse

Amazon Customer
5.0 out of 5 stars Okay, the Cello is now my favourite instrument.
Reviewed in the United Kingdom on 11 September 2020
Verified Purchase
In my 65 years I have always enjoyed classical music, even from a very early age. I have never actually sat down though and listened to individual instruments. I first heard this instrument being played on Facebook and it blew me away. I have never heard such passion being exuded by such an instrument and I have now concluded that it is my favourite. The CD is a collection of wonderful pieces and I cannot get enough of it. 5-stars from me.
Read more
One person found this helpful
Report abuse

B. J. Morris
4.0 out of 5 stars Great music for the cello
Reviewed in the United Kingdom on 15 May 2020
Verified Purchase
Well if you like the cello then this is the one for you. Most of the music we may already know like the music from game of thrones....throw in an orchestra and 2 cellos up front. The DVD is pretty much the same as the CD but then there is a section where the electric cellos come on. Let's just say that I never would have dreamed that heavy metal music could be played on the cello...amusing at the least.
Read more
Report abuse

Steve & Paul
5.0 out of 5 stars Fabulous
Reviewed in the United Kingdom on 28 July 2019
Verified Purchase
A real passionate and heart warming display of two guys who love their instruments and breath the music.
Read more
2 people found this helpful
Report abuse
See all reviews
Back to top
Get to Know Us
Make Money with Us
Let Us Help You
And don't forget:
© 1996-2021, Amazon.com, Inc. or its affiliates