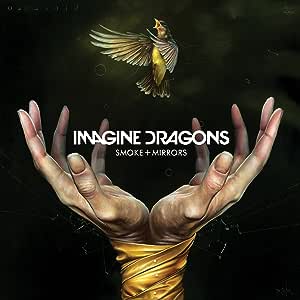 Secure transaction
Your transaction is secure
We work hard to protect your security and privacy. Our payment security system encrypts your information during transmission. We don’t share your credit card details with third-party sellers, and we don’t sell your information to others. Learn more
Details
Ships from
Amazon AU
Sold by
Amazon AU
New (2) from
$32.98 FREE Delivery on first order.

On Smoke + Mirrors, Imagine Dragons use the frenetic energy of life on the road to infuse their music with both raw tension and intense vulnerability. As on their double-platinum full-length debut Night Visions, the band works with sharply crafted beats and grooves to dream up rhythm-driven rock music that's artful yet visceral.

4.7 out of 5 stars
4.7 out of 5
738 global ratings
How are ratings calculated?
To calculate the overall star rating and percentage breakdown by star, we don’t use a simple average. Instead, our system considers things like how recent a review is and if the reviewer bought the item on Amazon. It also analyses reviews to verify trustworthiness.

Mummy of Two
5.0 out of 5 stars Pure Gold
Reviewed in the United Kingdom on 15 March 2015
Verified Purchase
I became a fan of Imagine Dragons after hearing their track Radioactive at the end of the film  The Host [Blu-ray ] and I have been hooked to their music ever since. I absolutely love their album  Night Visions  and so when this new album was released I ordered it straight away and can honestly say I have not been disappointed. The album is a bit different from Night Visions and has a different feel to some of the tracks but still has the Imagine Dragons 'stamp' so to speak. I love the tracks Smoke And Mirrors, I'm So Sorry, I Bet My Life, Trouble, Hopeless Opus and Warriors well to be honest I love the whole album. Brilliant album, great tunes and rock out music along with slower tracks. Hoping to go see them when they tour later this year and this album definitely doesn't disappoint.
Read more
3 people found this helpful
Report abuse

bearsome
5.0 out of 5 stars Same quality, just as good!
Reviewed in the United Kingdom on 19 August 2015
Verified Purchase
I saw Imagine Dragons on tv footage of last year's Glastonbury Festival, and was very impressed. It took me a while to get round to ordering their Night Visions album, with tracks I knew, and I loved it. So, eventually, I ordered Smoke and Mirrors. Although pretty different from Night Visions, it's what I'd expect from a relatively new, and young, band. WHY just repeat the same type of stuff you've done before? I like this album just as much as the previous one, and the title track is just beautiful. Excellent!
Read more
One person found this helpful
Report abuse

Tracey B
3.0 out of 5 stars Bonus CD not as described!
Reviewed in the United Kingdom on 22 September 2015
Verified Purchase
First off I adore Imagine Dragons and this album is amazing. My issue is with the item itself. The first CD was fine but the bonus CD was not Imagine Dragons it was some Jazz album. To say I was a tad upset is an understatement as I bought this edition primarily for the Monster track that was on the bonus CD. Just be wary if you buy this as in my case it was not what was advertised or that I had paid £20 for.
Read more
One person found this helpful
Report abuse

Mr. J R Patterson
5.0 out of 5 stars Awesome.
Reviewed in the United Kingdom on 31 January 2018
Verified Purchase
It's Imagine Dragons on Vinyl with amazing artwork. Nothing more to say.
Read more
One person found this helpful
Report abuse

Eddie
1.0 out of 5 stars Badly marked records & not limited edition version as advertised
Reviewed in the United Kingdom on 7 May 2019
Verified Purchase
The vinyl records are all marked, i guess no quality control in the factory where they were made & not limited edition version as advertised
Read more
Report abuse
See all reviews
Back to top
Get to Know Us
Make Money with Us
Let Us Help You
And don't forget:
© 1996-2021, Amazon.com, Inc. or its affiliates