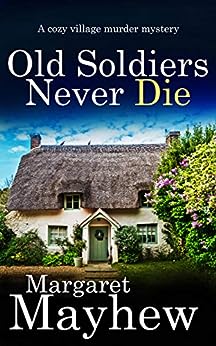 4.3 out of 5 stars
4.3 out of 5
1,836 global ratings
How are ratings calculated?
To calculate the overall star rating and percentage breakdown by star, we don’t use a simple average. Instead, our system considers things like how recent a review is and if the reviewer bought the item on Amazon. It also analyses reviews to verify trustworthiness.

Bobbie doran
5.0 out of 5 stars Very nice book, good read, very English
Reviewed in Australia on 22 June 2021
Verified Purchase
I really enjoyed this book as I am ex English. This is very much like Agatha Christie books, with Miss Marble being replaced with the Colonel. There was also a touch of Gilbert and Sullivan, which I also like. If you enjoy gardening there is something in there for you too. Set in a small village, you get the sense of an era which is long passed. A very gentle and easy to read book. I would recommend it and hope you would enjoy it too.
Read more
Helpful
Report abuse

Maggs
TOP 1000 REVIEWER
4.0 out of 5 stars Many suspects , but who ?
Reviewed in Australia on 29 September 2021
Verified Purchase
A retired colonel renovates and moves into a charming home in a small village. He is a widower.
A very nice practical neighbour helps him out with cooking and gardening .
There is a fete , a murder.
Many suspects.
Some vague clues.
Will he work it out ?
I liked this book so much I’m onto the second one.

carinya
4.0 out of 5 stars A cosy read
Reviewed in Australia on 5 December 2020
Verified Purchase
This was the first of Margaret Mayhew's books that I have read. It was a pleasant murder mystery where the lady of the manor dies on the day of the village fair. Our hero, Hugh, a new resident of the village decides to find the culprit. This is a village story and an easy comfortable read.
Read more
Helpful
Report abuse

Barbara Sth Aust
TOP 500 REVIEWER
4.0 out of 5 stars A wonderful story full of people who seem to genuinely care for people in their village.
Reviewed in Australia on 4 October 2020
Verified Purchase
I read many murder stories, but this one is very different. The story unlocks the lives of many people in the village. It shows their loyalty. Their loneliness. Their hopes. But most of all their wish that people in their village really do care for one an other.
Read more
Helpful
Report abuse

sheep galore
5.0 out of 5 stars Gentle story
Reviewed in Australia on 2 November 2020
Verified Purchase
I have just stumbled across this book which is the start of a series. I enjoy the gentle pace of the books, the descriptions of village life and the murder which is rather in the background, for a change! Lovely.
Read more
Helpful
Report abuse

Elizabeth Robinson
5.0 out of 5 stars Interesting
Reviewed in Australia on 28 May 2021
Verified Purchase
This book was a different take on the usual murder/mystery tales. All the suspects were given a back story and then after the murder the reader then followed the Colonel in solving the crime. A very enjoyable read
Read more
Helpful
Report abuse

tassiedevil
5.0 out of 5 stars Tassiedevil recommends
Reviewed in Australia on 9 January 2021
Verified Purchase
This is an enthralling story of how one man can be intergrated into community life and be the one to come to the rescue in finding the killer.
Read more
Helpful
Report abuse

Skippy Flink
5.0 out of 5 stars Good easy read
Reviewed in Australia on 29 December 2020
Verified Purchase
I thoroughly enjoyed this book, it's the epitome of life in a small village and I loved the characters.
Read more
Helpful
Report abuse
See all reviews

Fiona
3.0 out of 5 stars More twee than cosy
Reviewed in the United Kingdom on 9 October 2020
Verified Purchase
Goodness me, I'm struggling with this. Yes it's a cosy mystery - nothing to tax your brain, nothing graphic or dark but blimey, it's sooo cliched, with so many stereotypical characters. I believe it was written maybe 2006/2007 - but with no hint of mobile phones, no internet, no technology at all, everyone drinks whisky or sherry, houses are filled with chintz, garden centres seem to be regarded as new fangled nonsense. It doesn't make sense. Put it this way - if you were watching an old murder mystery film from the 1950s on a rainy day, with nice, easily recognisable "types" and a neat little set of suspects, you could happily watch with no thought at all for 90 minutes or so, then forget all about it. And that's just what this is - lovely, picturesque village, the kind that has long since disappeared, full of characters drawn from every mid-20th century film you could imagine. Lonely but handsome widower? Check. Bluff, no nonsense, hearty neighbour? Check. Bountiful but snobbish lady of the manor, bashful daughter, lonely spinster, drunk retired major - check, check and check. We even get a traditional summer fete, the sort my dad used to organise in the 1960s, with home made jams and tombola.
It's a decent enough little story, nothing too difficult to work out, and the writing is halfway decent, although there could be better use of vocabulary (too many repetitions) and a lot more suspense. For a 99p book it was a reasonably fun way to pass a couple of hours.
Read more
5 people found this helpful
Report abuse

R. Hall
5.0 out of 5 stars Village life
Reviewed in the United Kingdom on 28 November 2020
Verified Purchase
This is a realistic account of how a retired gentleman gets drawn into the vortex of a village, and fairly quickly finds a useful role defined for him, whether he like it or not. Hugh is a likeable character, with a certain skill in quietly and modestly gaining the trust of villagers, and soon finds himself relied upon to investigate mysteries. A well-written series, with gentle humour, and believable characters, this first story helps to establish who's who in the small community. Lots of useful gardening hints, too.
Read more
3 people found this helpful
Report abuse

Intheamazone
4.0 out of 5 stars Gentle, Escapist Read....
Reviewed in the United Kingdom on 10 October 2020
Verified Purchase
Engaging cosy mystery and the first in this series of reprints of the Village Mysteries centred around the village of Frog End. The characters of the village are varied and diverse - some likeable, some not, some eccentric and some not so, but all well drawn. It’s a gentle and escapist read and enjoyably so.
Read more
4 people found this helpful
Report abuse

Marianne
4.0 out of 5 stars Village setting
Reviewed in the United Kingdom on 14 February 2021
Verified Purchase
A good start to a very traditional cosy. The colonel has left the service, widowed, but still relatively young. He has two successful and busy children who have lives of their own. At loose ends, he buys a dilapidated cottage in the cotswolds, a place his wife had always wanted to live. Painstakingly the cottage is renovated to a high standard, a stray cat adopts him, and he meets his eccentric neighbor. Slowly he settles into village life, and of course, death comes knocking. Easy to engage with the village and characters, a boon for tradionalists.
Read more
2 people found this helpful
Report abuse

christine hemsworth
5.0 out of 5 stars A good read for a Covid lockdown.
Reviewed in the United Kingdom on 10 February 2021
Verified Purchase
The main character the Colonel is believable. He is a gentle kindly man and each book makes me want to read more of his exploits in his lovely rural village. This is an England dreamed of by many , and when I find it I will stay. As things are I will read all six books, bought at one time. The books have inspired me to make my garden lovely so that I will have somewhere pleasant to sit and read this summer.
Please can't you write just one more?
Read more
2 people found this helpful
Report abuse
See all reviews
Back to top
Get to Know Us
Make Money with Us
Let Us Help You
And don't forget:
© 1996-2021, Amazon.com, Inc. or its affiliates