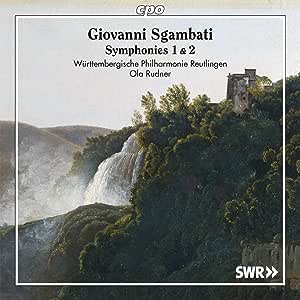 Secure transaction
Your transaction is secure
We work hard to protect your security and privacy. Our payment security system encrypts your information during transmission. We don’t share your credit card details with third-party sellers, and we don’t sell your information to others. Learn more
Details
Ships from
Amazon AU
Sold by
Amazon AU
New (9) from
$22.45 FREE Delivery on first order.

The composition of magnificent symphonies was not exactly the domain of Italian composers of the nineteenth century. However, this became the calling of Giovanni Sgambati, a Liszt pupil very much qualifying as the most important composer of symphonic music in Italy during his century. He contributed more to the renaissance of Italian instrumental music than any other composer, paving the way for its new popularity during the second half of the nineteenth century. Liszt described Sgambati as an extraordinary and genuine artist, Richard Wagner recommended his works, and European heads of state decorated him with medals. Although the dates of this Rome native lay rather precisely between those of Verdi and Puccini, he did not compose a single opera and as a composer endeavored to develop a style that would blend the cantability of his fatherland into the structural landscapes of the German romanticists. The harmonic language of his symphonies is tonal but also nuanced with many chromatic means and dissonances. His second symphony was rediscovered only a few years ago and now is celebrating its world recording premiere on cpo.

Ludwig VB
4.0 out of 5 stars Symphonies that will grow on you
Reviewed in the United Kingdom on 8 May 2020
Verified Purchase
This is a fair recording of two of my favourite 'unknown' symphonies. For the first symphony (my favourite), I prefer the recording by Francesco La Vecchia on Naxos; it's more relaxed pacing suits the piece and the recording quality is slightly superior, being one of Naxos's standout digital recordings. That said, this particular version has the advantage of coming with the second symphony, only ever (as far as I know) recorded once more elsewhere, in a live recording conducted by Francesco Attardi. The performance on that disc is very good, but is ruined for me by audience (and possibly extraneous orchestra) sounds which on a mainstream label will have surely been edited out. This performance under Rudner on the other hand has no such drawbacks, and although the sound is slightly closed and does not reveal as much orchestral detail as it might, it is still perfectly acceptable.

As for the pieces themselves, the first symphony is marvelous, a mixture of Italian lyricism with germanic symphonic grip. Although very much in the romantic vein, there are some very novel touches and memorable tunes that sets it above most other lost 'masterworks'. For me the only slightly routine movement is the final one, but the rest of the symphony is so fine that this doesn't dampen my admiration of it.

The second symphony took longer to grow on me, but as with the first, repeated playings will reward the listener as the lyrical passages do stick in the mind.

I can wholeheartedly recommend this disc to anyone looking for a new romantic symphony to discover, albeit I would strongly recommend also the Naxos disc for the Sgambati symphony no 1
Read more
One person found this helpful
Report abuse