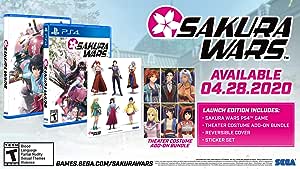 The Imperial Combat Revue takes the stage as Tokyos defense force against a demon threat in this extravagant adventure. Soldiers in wartime, but theater performers in peacetime, the Revues Flower Division is not living up to their legacy and is at risk of being shut down. As newly appointed captain Seijuro Kamiyama, its up to you to turn the team around. Dramatic Character Interplay Engage with a colorful cast through the dynamic LIPS dialogue system where what you say and how you say it has a profound impact on relationships off and on the battlefield. Exciting Combat Payoffs Your bonds with team members flow into the high-energy combat finale of each episode, featuring action-packed fights with giant steam-powered mecha. Brilliant Anime Production Gorgeous animated sequences, a lush soundtrack, and characters designed by anime and JRPG luminaries will transport you into a vibrant 1940s steampunk Tokyo.

4.7 out of 5 stars
4.7 out of 5
772 global ratings
How are ratings calculated?
To calculate the overall star rating and percentage breakdown by star, we don’t use a simple average. Instead, our system considers things like how recent a review is and if the reviewer bought the item on Amazon. It also analyses reviews to verify trustworthiness.

Jimmy
4.0 out of 5 stars Unusual fun game
Reviewed in Canada on 13 May 2020
Verified Purchase
As a starter, I didn't play the old dreamcast Sakura Wars game, only watched the first anime so I had some kind of introduction to the universe.
While this serves as a reboot mainly due to gameplay change and a whole cast of characters(from RTS to Beam them all), it's stil a direct sequel to the older games, as some characters comes back to build up the world and story.

Like the original(and thus the anime), we play as the captain of the imperial division, a group of people who protect their city against demons and provide entertainment off-duty, as a theatre troup.
All the characters are lovely with distinct personality and are fun to interact with.

I've put unusual in the headline since unlike most of game, where chunk of gameplay are separated with dialog, this is the opposite. Dialog and choices takes 90% of the game while fights are secondary elements. See it as a Visual Novels with occasional action moments.

Now, the dialog is find, even if there is some cases where the option we chose isn't really what's said by our character.
For example, at one point into the game, someone asks us to do something with them to pass time. The options are "Rock Paper Scissors", "Hide and Seek" and "Sumo".
Now, the person asking that is someone who enjoys fighting and challenges so "Sumo" looks like a reasonable choice. That someone first agree, but after that, our character says that the loser must strip down. Well, in that case you lose afinity points with that character.

There is also a "Koi-Koi" minigame with a fair amount of oponents to spend time with.

It took me around 35/40 hours to beat the game by clearing as much side content as I could (I got around 90% of the side-events) and only beaten 2 of the 18 koi-koi opponents. There is a new game+, but sadly no chapter selection, which makes unlocking all the main characters ending in a single file long and tedious. But since affinity is kept, all the side content can be ignored.
Read more
2 people found this helpful
Report abuse