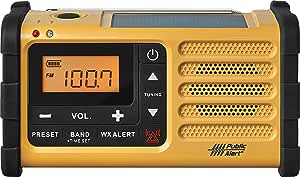 Brand: Sangean
4.7 out of 5 stars 15 ratings
Secure transaction
Returns Policy
Amazon-managed Delivery
Your transaction is secure
We work hard to protect your security and privacy. Our payment security system encrypts your information during transmission. We don’t share your credit card details with third-party sellers, and we don’t sell your information to others. Learn more
Amazon-managed Delivery
Amazon manages delivery by using preferred couriers/agents. Order delivery tracking to your doorstep is available

The MMR-88 is a rugged digital AM/FM Public Alert Certified Radio with three charging modes (Hand Crank, USB, or Solar Power). No matter where you are, the MMR-88 lets you listen to your favorite music, news, and radio programs while keeping you safe with up to date weather forecasting and alerts.

This Public Alert Certified Radio alerts you of severe weather warnings. And with a built-in adjustable LED Flashlight and loud emergency buzzer you can carry safety with this radio no matter where you go.

Features a built-in high power 850mAh Lithium-ion rechargeable battery that can be charged using one of three charging methods, including the built-in Hand Crank/Dynamo Power, USB, or let mother nature charge it utilizing Sangean''s state of the art Solar Panel. Power wherever and whenever you need it.

Compatible with your USB devices and media players, the MMR-88 is extremely versatile and user friendly. Not only can you charge this radio with 3 different options, but you can also charge your USB compatible devices with the supplied USB A to Micro B Cable.

4.7 out of 5 stars
4.7 out of 5
15 global ratings
How are ratings calculated?
To calculate the overall star rating and percentage breakdown by star, we don’t use a simple average. Instead, our system considers things like how recent a review is and if the reviewer bought the item on Amazon. It also analyses reviews to verify trustworthiness.

Alpine9
5.0 out of 5 stars Superb
Reviewed in Australia on 6 January 2020
Verified Purchase
It is rock solid....excellant reception in AM and FM. It also has presets which is rare among emergency radios. Yes I agree that the battery capacity is low if you intend to use this to charge a smartphone......but I would suggest most people have battery packs for their emergency kit. As an emergency radio which is the primary purpose of this product.....it is a gem!!!
Read more
One person found this helpful
Helpful
Report abuse

Garry C
4.0 out of 5 stars Handy camping radio
Reviewed in Australia on 16 July 2020
Colour: Black, YellowVerified Purchase
This definitely charges reasonably fast in the sunlight. Not really used the cranking handle.
Bought a slightly bigger rechargeable battery off eBay to make the radio last longer.
Like the 90 mins sleep mode. Torch works ok and in low mode will easily go through the night, for a couple of nights before charging required.
Read more
One person found this helpful
Helpful
Report abuse

Pete
3.0 out of 5 stars Not bad. But not great either
Reviewed in Australia on 28 January 2021
Colour: Black, YellowVerified Purchase
I like it.
But maybe it's not suitable for emergency in Australia.
I cannot locate any specific emergency channels here in Victoria.
Signal/Reception is no better than any other radio.
Read more
Helpful
Report abuse

Mortley
5.0 out of 5 stars Good unit
Reviewed in Australia on 7 August 2020
Colour: Black, YellowVerified Purchase
Good unit. Well made and the sound is excellent! The battery life is average but a better quality battery replacement is easy. I do like that the battery itself is easily ejected and replaceable. No complaints with this radio. Very happy!
Read more
Helpful
Report abuse

Michael Bull
5.0 out of 5 stars Great Emergency Radio
Reviewed in Australia on 4 January 2021
Colour: Black, YellowVerified Purchase
This is fantastic, this is my 2nd Sangean
Read more
Helpful
Report abuse

Richard. L
5.0 out of 5 stars Useful
Reviewed in Canada on 11 May 2017
Colour: Black, YellowVerified Purchase
Got this thing to bring with me when out camping. I have only charged it once, when at home I have it sitting in my kitchen window and the solar panel is able to keep it fully charged.

There are seals around all the charging ports so it is some what water proof although I would probably never want to dunk it in water, the seals do there job to keep out rain.

The hand crank on it is easy to use, and does charge it quite well. The flash light is not to impressive on it, but in a pinch it will do. Over all very happy with this purchase.
Read more
26 people found this helpful
Report abuse

Peter B.
5.0 out of 5 stars A great radio for outdoors
Reviewed in Canada on 6 June 2016
Colour: Black, YellowVerified Purchase
The best little outdoor radio I've bought. Excellent sound, for the golf cart, boat and around the yard. Solar panel keeps it charged. It is solidly constructed and charges quick. I like the 1.5 hour auto off.....if you forget to turn it off. The weather alert function does not consume much battery power. Over all I'm completely satisfied!
Read more
19 people found this helpful
Report abuse

Richard Downing
1.0 out of 5 stars Battery? What battery?
Reviewed in the United States on 30 April 2018
Colour: Black, YellowVerified Purchase
Sangean makes great radios, and the MMR-88 weather radio is no exception. Reception is good, crank and solar power work just fine, the radio itself is sturdy and an easy size to quickly pack in emergencies. There are other weather radios that do good jobs, such as Midland’s, but The MMR-88 stands out in that it has a replaceable battery.

So why just one star? you ask. Because, I answer, one thinks less of a replaceable battery that is not replaceable.

First, Sangean has chosen a fairly rare size to begin with, the 18350. Keeping in mind that 18350s do not come in standard sizes as do, say, AA’s and AAA’s, and that the battery compartment is very tight, limiting the choice even further (BTW “even further” means “zero” in my search to date). One Amazon reviewer—in a most insightful perspective on the MMR-88—suggests removing the original and inferior 18350 battery and replacing it with an AW brand 18350. Good advice if the AW factory had not been flooded and, as of this writing, no longer able to produce batteries. The other few options include a handful of Chinese 18350s with the word “Fire” in the name: ReadyFire, SureFire, EverFire. Especially avoid OnFire. These are not good choices, especially when the batteries are unprotected. Does the radio itself offer protection? you ask. I ask that, too.

Write to Sangean, you say. Tell them the problem. Ask them what to do. I did: I wrote. I told. I asked. Weeks later and I’m still waiting for a reply. I’m thinking it might be something I said. I do know that hurricane season is looming, and I have nasty visions of trying to crank up/solar power a dead battery as my house blows away.

Listen, I’ll be more than happy to bump this review to 5 stars if Sangean will write me and tell me specifically where I can get an 18350 battery that’s safe and fits. If Sangean goes the extra step and tells me whether or not the MMR-88 offers internal battery protection, I’ll even throw in a puppy.

A favor: if any readers know of a battery that fits, please let me know. It would be much appreciated.
Read more
336 people found this helpful
Report abuse

Has a very strong atenna, I was able to get AM stations from as far as New York City (I'm currently located in Halifax)

Dawn butler
5.0 out of 5 stars Excellent reception in hard to reach areas
Reviewed in Canada on 4 October 2019
Colour: Black, YellowVerified Purchase
Love this radio
This is my 3rd purchase for friends who live on a semi-remote island. It can pick up stations that other radios can’t and is nice and portable. Really nice quality
Read more
One person found this helpful
Report abuse
See all reviews
Back to top
Get to Know Us
Make Money with Us
Let Us Help You
And don't forget:
© 1996-2021, Amazon.com, Inc. or its affiliates