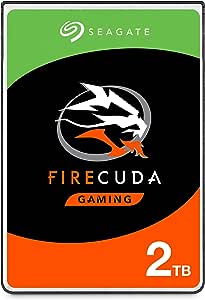 Brand: Seagate
4.4 out of 5 stars 4,889 ratings
Available from these sellers.

For over 20 years, the BarraCuda family has delivered ultra-reliable storage for the hard drive industry.

4.4 out of 5 stars
4.4 out of 5
4,889 global ratings
How are ratings calculated?
To calculate the overall star rating and percentage breakdown by star, we don’t use a simple average. Instead, our system considers things like how recent a review is and if the reviewer bought the item on Amazon. It also analyses reviews to verify trustworthiness.

Bec
5.0 out of 5 stars PS4 Upgrade
Reviewed in Australia on 21 March 2018
Capacity: 2TBVerified Purchase
Purchased for PS4 slim upgrade, its 2mm thinner than the HDD bay so you need to hold it up to screw in but it started first go and is working fine with plenty of space for the games I had queued to download.

The only not so great thing was packaging from the amazon warehouse. It was rattling around loose in the box with a second controller that i bought at the same time. There was some paper shoved in with it but not much.
Read more
3 people found this helpful
Helpful
Report abuse

L. Tong
5.0 out of 5 stars Works great!
Reviewed in Australia on 11 September 2020
Capacity: 2TBVerified Purchase
First up: this hard drive was difficult to find locally for a good price. It was mostly sold out.

I bought this hybrid drive for my ps4. Easy transfer, no hiccups and, it’s been a couple of weeks and it has not failed. And it’s fabulous to see so much space for all my games, finally!

Delivery took a while, because COVID, but it has otherwise been great! Thank you!
Read more
Helpful
Report abuse

Scribblygum
5.0 out of 5 stars Great price & dependable product for any data storage
Reviewed in Australia on 29 October 2019
Capacity: 1TBVerified Purchase
Quality product and quick postage,
Hard drive and brand you and your data can definitely count on, always reliable never had one fail on me, have always used to replace other cheaper quality drives!
Thorough recommend
Read more
Helpful
Report abuse

slowriots
1.0 out of 5 stars Fully corrupted all PS4 data twice over 2 days, instant return
Reviewed in Australia on 4 August 2020
Capacity: 2TBVerified Purchase
This is supposed to be the best option for an internal PS4 HDD. Hopefully I just got a dud.
Read more
Helpful
Report abuse

B. Stokes
5.0 out of 5 stars Great item thank you
Reviewed in Australia on 12 September 2020
Capacity: 1TBVerified Purchase
Easy to install no problems with it so far.
Read more
Helpful
Report abuse

Glenn Fitzpatrick
5.0 out of 5 stars Worth ever cent!
Reviewed in Australia on 11 May 2018
Capacity: 2TBVerified Purchase
Excellent, product. Installed into my Acer Aspire F15 and running smooth as ......
Read more
Helpful
Report abuse
See all reviews

RichyD
5.0 out of 5 stars Great drive very happy with the performance
Reviewed in the United Kingdom on 5 June 2017
Capacity: 2TBVerified Purchase
Great addition to my laptop, which already has a primary SSD and I wanted a large 2nd drive.

I was limited to 7mm and wanted large capacity, and this is perfect, and very fast too.

Copying files between my SSD and the SSHD is amazing, with the SSD cache working fantastic up to 4GB of data and then the hard drive kicking in after.

5.0 out of 5 stars Great drive very happy with the performance
Reviewed in the United Kingdom on 5 June 2017
Great addition to my laptop, which already has a primary SSD and I wanted a large 2nd drive.

I was limited to 7mm and wanted large capacity, and this is perfect, and very fast too.

Copying files between my SSD and the SSHD is amazing, with the SSD cache working fantastic up to 4GB of data and then the hard drive kicking in after.

It took about 5 minutes to whip the old drive out and replace it with this. The only thing that caused issues was Sony's rubbish instructions (it links to downloading the PS4 Firmware to a USB disk, but the link sends you to a Firmware Update, not the Full Firmware file you require).

Now it's in and setup this drive performs fantastically well, it seems to have significantly reduced loading times as well increased the storage space four fold. It's a steal at this price, even more so with the free Assasins Creed (PC Version) game bundled with it when I purchased it.
Read more
54 people found this helpful
Report abuse

Charlie Cole
1.0 out of 5 stars Failed after 7 months
Reviewed in the United Kingdom on 8 September 2018
Capacity: 2TBVerified Purchase
I purchased this drive on the 23rd January 2018 as an upgrade for my PS4 Pro, the Seagate ST2000LX001 is a popular recommendation for a PS4/PS4 Pro upgrade drive, it was reasonably priced, offered 2x the storage capacity of the standard drive and should be faster than as well, resulting in less texture pop-in and faster load times.

Earlier today I went to install the new Spider-Man game, and the PS4 Pro just wouldn't start, after multiple restarts I finally got an error that the PS4 can't detect the storage device, so I unplugged the PS4, took out the drive and plugged it into an external HDD caddy and plugged it into my PC, the drive isn't even spinning, let alone being detected. It's just completely died -- shame, as I had many games, save games, screenshots and videos stored on this drive.

I cannot recommend this drive, if you want to upgrade your PS4/PS4 Pro, just get a regular HDD or with how affordable SSDs have become in recent months, get one of them. I'd avoid SSHDs, this drive, while good when it worked just cannot be recommended, not when it failed this quickly.
Read more
30 people found this helpful
Report abuse

Davish
5.0 out of 5 stars Perfect for PS4
Reviewed in the United Kingdom on 25 July 2017
Capacity: 2TBVerified Purchase
Bought this HD for my PS4 since the 500gb were not enough. The HD is fast and fits the internal socket of the PS4 perfectly.
Load times were improved a lot, specially in games like the Witcher, were they were a nightmare. Now when I load a game in Witcher, I see the usual story image/text and when the picture disappears the next loading screen almost instantly goes back to the game - used to be around 15-20 seconds wait after the picture (before HD install). 2TB is quite enough and still have 1.2TB free even after installing all my games. Well recommended.
Read more
23 people found this helpful
Report abuse
See all reviews
Back to top
Get to Know Us
Make Money with Us
Let Us Help You
And don't forget:
© 1996-2021, Amazon.com, Inc. or its affiliates