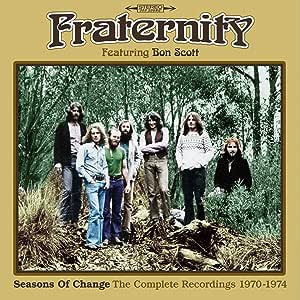 Three CD set. Founded in Australia, rock band Fraternity will forever be associated with their lead singer, Bon Scott, who would later join AC/DC and enjoy worldwide fame. However, Scott's tenure with Fraternity has been poorly documented on the reissue market. Of the two albums the band had issued at the time, Livestock and Flaming Galah, neither album has been released officially. And their story has never been told accurately... Half a century later, Seasons Of Change finally seeks to amend this oversight. Curated in conjunction with surviving band members (Bruce Howe, John Freeman, Sam See, John Bisset, Uncle John Eyers and the Estate of Mick Jurd) and their original manager Hamish Henry, this 3-CD set seeks to offer the complete recorded output of Fraternity, including both their albums from 1971-72 (originally issued on Sweet Peach and RCA respectively), utilizing the original master tapes and best possible remastering sources, adding all relevant non-albums singles A's and B's and EP tracks. Bonus tracks feature Fraternity backing The Valentines' Vince Lovegrove and their victory at the National Battle Of The Sounds competition where they claimed the title of Australia's No. 1 band. In addition, research by Victor Marshall for this package uncovered the long-lost Hamish Henry cache of session tapes which have been curated into Fraternity's third album Second Chance. Second Chance also features live tracks recorded at PT Lincoln, South Australia as part of their historic Country Arts Tour and unheard songs including vocals and song writing contributions from Bon Scott.

4.4 out of 5 stars
4.4 out of 5
13 global ratings
How are ratings calculated?
To calculate the overall star rating and percentage breakdown by star, we don’t use a simple average. Instead, our system considers things like how recent a review is and if the reviewer bought the item on Amazon. It also analyses reviews to verify trustworthiness.

JojoRaw
5.0 out of 5 stars Bon Scott Forever.
Reviewed in the United Kingdom on 25 January 2021
Verified Purchase
If you like early AC/DC, the Bon Scott era, don't hesitate, get this lovely packaged 3 discer, & enjoy hearing more of the voice of one of the greatest frontmen ever. Musically very tight & well produced, no disappointments here.
Read more
Report abuse

Edward J. mccarthy Jr.
4.0 out of 5 stars VERY LONG OVERDUE SET THAT COVERS BONS FEW YEARS WITH FRATERNITY!!!!!!
Reviewed in the United States on 17 February 2021
Verified Purchase
back around 15 years ago when there was this great aussie label called AZTEC RECORDS that where doing killer aussie only artist reissues of 60s & 70s rock in nice 6 panel remastered cds with bonus tracks & all i would have thought this would have been done back then, they did a killer job on the BUSTER BROWN cd reissue( for the something to say lp 1973), anyway this is ( i would guess) most all of bon scotts recorded output he did with fraternity between 1970 and late 1973 or there about. DO NOT EXPECT THESE 3 DISCS TO SOUND ANYTHING LIKE AC/DC did but this band w/ bon on the mic was really good, i hear a mix of psyche, hard rock, commercial rock, folk, country and a bit of what was called acid rock some 50 years ago, this comes in a really nice hard clam shell box and the cds come in replicated mini lp sleeves of the first 2 albums as well as the same with the just released third cd that was recorded during 1972 through 1973, great remastering on all 3 discs and what a nice booklet this comes with!!! my guess is this is all you would ever need by fraternity, not long after the band split with bon bon ended up as ac/dcs roadie while dave evans was still on the mic with them & well you know the rest was history there, this is a great high quality 3 cd box set and im so glad this finally got the right reissue treatment, lets just sum this up as its good time early 70s rock and roll, not poppy like bons stuff in the 60s with the VALENTINES wich was not bad either but i feel rockers will enjoy this more then the valentines compilation cd i got years ago ( as well as some lps) odd i should be spinning this now as in a couple of days it will be 41 years since we lost bon, rip fella but sadley ya made it huge after you where gone. anyway great box set here that fans will really enjoy!!!!
Read more
Report abuse
See all reviews
Back to top
Get to Know Us
Make Money with Us
Let Us Help You
And don't forget:
© 1996-2021, Amazon.com, Inc. or its affiliates