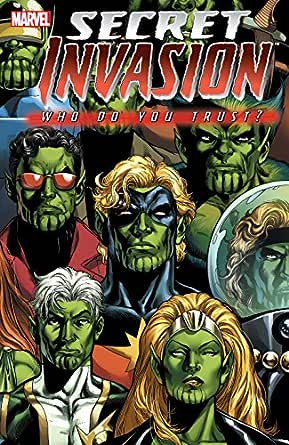 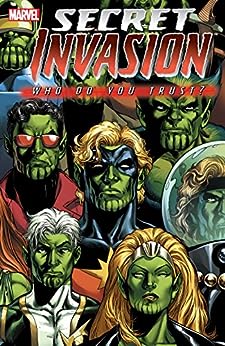 Secret Invasion: Who Do You Trust? Kindle & comiXology

3.5 out of 5 stars
3.5 out of 5
12 global ratings
How are ratings calculated?
To calculate the overall star rating and percentage breakdown by star, we don’t use a simple average. Instead, our system considers things like how recent a review is and if the reviewer bought the item on Amazon. It also analyses reviews to verify trustworthiness.

Dean Thornton
3.0 out of 5 stars Looks a good story.
Reviewed in the United Kingdom on 26 January 2019
Verified Purchase
Not had chance to read it yet, but it looks like it might be a good story.
Read more
Report abuse

Jmaynard
2.0 out of 5 stars Started out good but then crashed and burned
Reviewed in the United States on 19 April 2014
Verified Purchase
I've been working my way through the major Marvel crossovers, with the latest being  Secret Invasion . This book popped up as a recommendation at some point along the way and I ordered a copy.

The book starts out promising. It opens with a few stories that lead directly into events that are depicted in the main event. For example, the SWORD space station is attacked and Agent Brand ends up outside the station in a protective bubble. Here, we see her in the bubble reflecting on how she got to that point. Similar encounters for Beast and Wonder Man, and also Noh Var, follow. Then the book takes a turn.

The rest of the book is taken up by Tony Stark "reviewing" a report prepared by Maria Hill for him. In actuality, it's just an EXTENSIVE recap of events that lead into Secret Invasion. And that recap is done through large, wordy dialog boxes (of Tony "thinking to himself") coupled with images from throughout the tie-ins. Everything here is just a summary of prior material. After Tony's review, the book gives readers a Skrull "report" to his queen - which amounted to a bunch of character profiles. The book concludes with two somewhat interesting interviews with a writer and artists from the event.

Overall, this was a huge disappointment for anyone who has collected even some of the tie-in trades. I would only recommend this collection to those who don't intend to read the tie-ins at all, just the main event. Otherwise, this is a waste.

Joe
1.0 out of 5 stars Not worth reading after the third chapter
Reviewed in the United States on 19 September 2017
Verified Purchase
Very good until the third chapter,after that it garbage. I could care less about interviews with the people who put the story together
Read more
Report abuse
See all reviews
Get FREE delivery with Amazon Prime
Prime members enjoy FREE Delivery and exclusive access to movies, TV shows, music, Kindle e-books, Twitch Prime, and more.
> Get Started
Back to top
Get to Know Us
Make Money with Us
Let Us Help You
And don't forget:
© 1996-2020, Amazon.com, Inc. or its affiliates