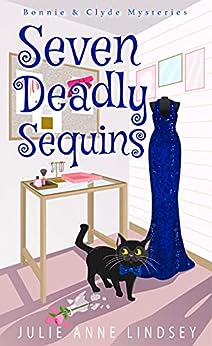 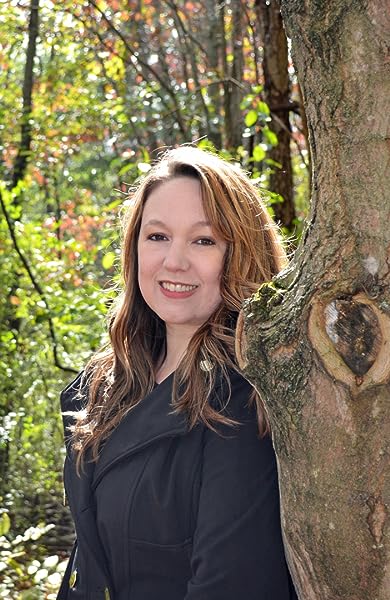 by Julie Anne Lindsey (Author) Format: Kindle Edition
Book 2 of 5: Bonnie & Clyde Mysteries
See all formats and editions
Sorry, there was a problem loading this page. Try again.
Bonnie & Clyde are at it again!

When the death of a local baker threatens to shred the fabric of their lovely town, this dynamic sleuthing duo bolts into action. The results will leave you in stitches.

It’s summertime in beautiful Bliss, Georgia, and while second chance dress shop owner, Bonnie Balfour, would prefer to spend her time redesigning gowns for the upcoming Founder’s Day parade, her grandma, Gigi, is too hot under the collar to concentrate. It seems Gigi’s former friend is using her recipe to sell cobbler at the local festivities, and she’s claiming Gigi’s treat as her own!

Things go from uncomfortable to downright ugly when Gigi confronts her friend publicly about the unseamly pattern of behavior, only to later find the woman dead! With Gigi’s prints on the murder weapon, and dozens of material witnesses to their earlier scrap, Gigi cuts straight to the top of Sheriff Wright’s suspect list.

Now, Bonnie and her kitty companion, Clyde, must don their sleuthing hats once more.

To mend Gigi’s reputation and deliver justice for the victim, Bonnie must lace together a string of clues about what really happened that night. Will she wind up on the killer’s cutting board in the process?

Julie Anne Lindsey is an award-winning and bestselling author of mystery and romantic suspense. She’s published more than forty novels since her debut in 2013 and currently writes series as herself, as well as under the pen names, Bree Baker, Jacqueline Frost and Julie Chase. When she's not creating new worlds and fostering the epic loves of fictional characters, Julie can be found hanging out with her family in Northeastern Ohio or plotting with her shamelessly enabling friends. Today she hopes to make someone smile. One day she plans to change the world. Learn more about Julie at julieannelindsey.com

4.5 out of 5 stars
4.5 out of 5
331 global ratings
How are ratings calculated?
To calculate the overall star rating and percentage breakdown by star, we don’t use a simple average. Instead, our system considers things like how recent a review is and if the reviewer bought the item on Amazon. It also analyses reviews to verify trustworthiness.

Susan Pearson
5.0 out of 5 stars Lighthearted murder and mayhem
Reviewed in Australia on 15 May 2022
Verified Purchase
A good lightweight story full of murder, intrigue and romance. It's nice to read an enjoyable book that is not full of gratuitous sex and violence. A go to author for a light read.
Read more
Helpful
Report abuse
See all reviews

Katy
5.0 out of 5 stars Fantasy
Reviewed in the United Kingdom on 1 June 2022
Verified Purchase
Good holiday read, light and easy. Great to read between a few heavy thrillers. Helps to relax the mind and body
Read more
Report abuse

nhomes7
5.0 out of 5 stars Bonnie and Clyde are at it again!
Reviewed in the United States on 15 October 2021
Verified Purchase
Murder is afoot again in the small town of Bliss, Georgia, with the second installment of the Bonnie & Clyde Mysteries. This time, our amateur sleuth’s grandmother, Gigi, is the suspect! Not wanting her grandmother to be wrongfully accused and allowing the real killer to get away, Bonnie, along with her best sidekick Clyde, are more motivated than ever to figure out who dun it, but will Bonnie’s meddling put her in danger? Or worse, drive a wedge between her and a certain handsome,new sheriff?

It was so fun to be back in Bliss with Bonnie and everybody! Bonnie and Mason’s banter and chemistry continue to entertain and give me butterflies while the murder mystery definitely keeps you guessing and on your toes!

I’m so happy that the killer wasn’t the only one who got the justice they deserved! By the end, Bonnie is well on her way to being truly free.

Disclaimer: I received an ARC of this book in exchange for an honest review

TM KRAFT
5.0 out of 5 stars Fabulous Series Continues!
Reviewed in the United States on 24 March 2022
Verified Purchase
I am now on Book 4 of the Bonnie & Clyde series by Ms Julie Anne Lindsay, and never want the series to end!! Which it will with Book #8. The banter and repartee between the heroine, Bonnie and hero, Sheriff Wright is so quick and perfect, I was impressed that the author could create it.

What I most appreciate with these books is how the author has created flawed and at times troubled
characters who become real. I feel like I know them, and go through the same emotions as they do as the H/h develop a relationship. While there isn’t explicit sex in the books (I don’t think!), there is comforting touch and kissing and a psychological explanation why it hasn’t gone further in Book 4. Again, it goes to the heroine’s past which makes her real.

The small town is quirky, as are the peripheral characters. You have family, best friends, community, small business owners, humor and love, and a cat! The mysteries are interesting and Bonnie insinuates herself into them much to the consternation of Sheriff Wright.

Book 5 is due out in May 2022 and I already pre-ordered it. This has become my favorite cozy mystery series and I will be sad when it’s over. Enjoy!
Read more
One person found this helpful
Report abuse

Michelle
5.0 out of 5 stars Received ARC from Author
Reviewed in the United States on 15 October 2021
Verified Purchase
I was ecstatic to be able to read an ARC of this book!

Welcome back to Bliss, Georgia, where Bonnie and cat Clyde are at it again! This 2nd book in the series is just as much fun as the first book.
I can't wait for everyone to experience Bliss, Bonnie, Clyde and the rest of the quirky characters in town.
In this 2nd book, Bonnie's grandma Gigi, has discovered that her ex friend is using her cobbler recipe. Not only that but said friend intends to sell them at the Founder's day festival. When she ends up dead, Gigi is at the top of the suspect list. It's up to Bonnie and Clyde to find the real killer and rescue Gigi from the clutches of the law!
Read more
2 people found this helpful
Report abuse
See all reviews
Report an issue
Does this item contain inappropriate content?
Report
Do you believe that this item violates a copyright?
Report
Does this item contain quality or formatting issues?
Report