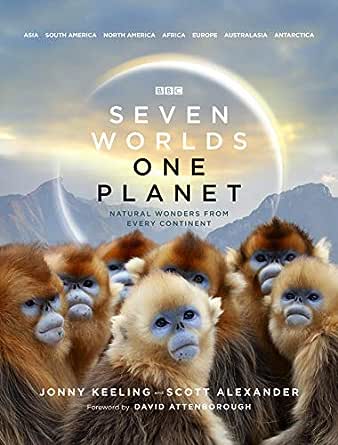 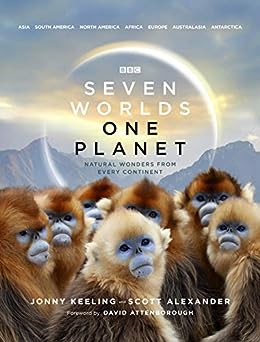 From the producer of Planet Earth II, an astonishing exploration of the natural wonders and wildlife of our seven continents, accompanying a landmark 7-part BBC series narrated by Sir David Attenborough --This text refers to the hardcover edition.

Jonny Keeling (Author)
Jonny Keeling is the executive producer of Seven Worlds, One Planet. A longtime BBC collaborator, he has produced and directed numerous wildlife mini-series and documentaries, including The Life of Mammals, Planet Earth, Man Vs Wolf and The Zoo. He has also worked on BBC's wildly popular Planet Earth II, presented by renowned naturalist Sir David Attenborough.

Scott Alexander (Author)
Scott Alexander is the series producer of Seven Worlds, One Planet. He has spent over 20 years with BBC Studios' Natural History Unit, filming on all seven continents. He has produced live TV from the middle of the Masai Mara for Big Cat Live, series produced the award-winning children's wildlife series Deadly60 and worked with Sir David Attenborough on the BAFTA winning landmark series, Life in Cold Blood.

4.8 out of 5 stars
4.8 out of 5
1,264 global ratings
How are ratings calculated?
To calculate the overall star rating and percentage breakdown by star, we don’t use a simple average. Instead, our system considers things like how recent a review is and if the reviewer bought the item on Amazon. It also analyses reviews to verify trustworthiness.

Nicola
5.0 out of 5 stars As usual a stunning book from the BBC!
Reviewed in the United Kingdom on 11 October 2019
Verified Purchase
A stunning book to accompany the new series out later in the year! As usual with BBC Books the photographs are stunning and the text is informative and portrays the wildlife and landscapes beautifully! I can't wait for the TV series which will bring it all together! David Attenborough is a legend!
Read more
21 people found this helpful
Report abuse

alfie
3.0 out of 5 stars More a photography book than anything else
Reviewed in the United Kingdom on 9 November 2019
Verified Purchase
It’s a beautifully presented book written to accompany the series. I wasn’t overly impressed, however, as each chapter (for each continent) seems quite rushed. For each animal there is basically a page of very concise information and nothing much else. Personally would’ve preferred more in depth text and less photos. That being said it’s worth buying and makes a good Christmas present.
Read more
8 people found this helpful
Report abuse

Melissa
3.0 out of 5 stars Meh, but nice inside
Reviewed in the United Kingdom on 4 June 2020
Verified Purchase
Book is nice inside, but I got a disgusting cover with some disgusting pages when the book was listed in very good condition. I got half amount refunded but the book still looks ugly from the outside. It's the kind of book that we call coffee table books, cause they're nice to sit on a coffee table. Not this one. The paper cover is dirty, the book itself is completely blue... Meh
Read more
One person found this helpful
Report abuse

KC
5.0 out of 5 stars 5⭐️
Reviewed in the United Kingdom on 30 October 2020
Verified Purchase
Bought as a gift for someone who enjoys the series that comes out, they were thrilled with it. I had a flick through and the pictures inside were beautiful! It’s great for you to look at but a perfect present for someone else who enjoys learning & seeing photo’s of the world. Very fast delivery also, I ordered it and it was here the next again day. Would highly recommend!
Read more
Report abuse

Lewis’x
5.0 out of 5 stars Beautifully written and pictures
Reviewed in the United Kingdom on 16 April 2020
Verified Purchase
Great quality pictures and beautifully written. More pictures than writing but I didn’t mind that. I would recommend for anyone interested in animals and the environment. Good price too.
Read more
One person found this helpful
Report abuse
See all reviews
Back to top
Get to Know Us
Make Money with Us
Let Us Help You
And don't forget:
© 1996-2021, Amazon.com, Inc. or its affiliates