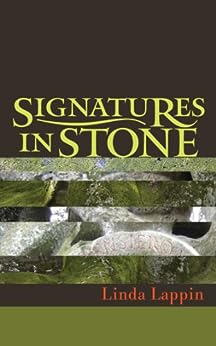 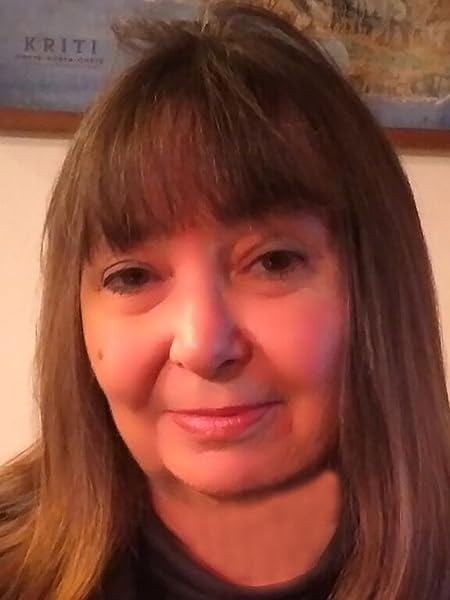 In SIGNATURES IN STONE, Linda Lappin brings all her nonpareil gifts for creating eye-catching local color, intricate plots, and menacing threats to a thoughtfully imagined glimpse into the minds and manners of a small group of artists, blackguards, and scoundrels in 1920s Italy to keep us securely in our easy chairs with the reading light turned on. In the villa at Bomarzo, roughly a 100 miles north of Rome, and especially in its fabled Monster Park, we have all the necessary elements for a mysterious divertissement--hidden panels, secret passages, premonitory art, drink- and drug-induced hallucinations, sexual intrigue, old maps, old books, ancient mysteries, sudden, blood-curdling manifestations and dread--all wielded cunningly by a master storyteller. I continue to be amazed by Lappin's feel for history, the genius of landscape, and the appurtenances of everyday life as well as her magnificent vocabulary for rendering, subtly and in detail, such things as an appetizing (or unappetizing) meal or a stroll through nature (or a tomb). She has an equally nuanced understanding of topics as far-ranging as Paris in the 20s, Renaissance and Etruscan art and sculpture, alchemy and the occult. Moments in the novel would remind you of James in THE TURN OF THE SCREW as you question the reliability of her narrator Daphne Dublanc. Other moments, of Fowles in THE MAGUS with its sense of wondrous and sinister life-altering mysteries beyond the pale. But the whole effect is Lappin's and the awareness that we are constantly immersed in a network of signs and symbols whose meaning eludes us, but which, if we could read them, would reveal every detail of our past and even predict our future ... building in crescendo until the event they herald becomes fully manifest, as in the novel's vibrant, surprising, and wholly satisfying conclusion. SIGNATURES IN STONE is a capriccio hermeticum you won't want to miss. --Tom Wilhelmus --Vicki Walton, I Love A Mystery

In Renaissance Italy, the gardens of the powerful offered far more than flowers; they were tools for altering one's consciousness... for changing one's destiny. So we learn when our heroine Daphne -- widow, writer, and connoisseur of dark pleasures -- is allowed entrance to the Monster Park attached to a decaying villa outside Rome. Ah, but the history lesson turns out to be the least of it, for the alacritous Daphne. SIGNATURES IN STONE alters both consciousness and destiny, as our heroine discovers intrigue to match her own, whisked in and out of secret passageways, brought up short by startling dead ends, tickled through squeezes tight enough to threaten suffocation. The novel's a Gothic-in-Wonderland mashup, no less, with a suspenseful throb that'll keep you dancing till dawn. --John Domini In March, I'd offered to review Lappin's Signatures in Stone. Being half-Italian, I was attracted to the book because of its subject matter -- art history, 1920's Italy and mystery, my favorite genre. I was not particularly interested in its gothic quality, but I was soon drawn in and didn't want to put the book down. The writing spirited me through more quickly than expected -- a real page turner. I look forward to reading her next novel and the author's two previous ones. Highly recommended for suspense, intrigue, intricacy and a study of the minds of people who aren't always what they appear to be. --Judy Dee, Bookshelves

Linda Lappin is a master of place, of character, of the past, and of literate prose as anyone who has read her brilliant novelistic portrait of Katherine Mansfield, KATHERINE'S WISH, can attest. To her newest novel, SIGNATURES IN STONE, she brings all these formidable literary skills and stirs in a mystery and a murder, set in Monster Park, in Bomarzo. SIGNATURES IN STONE is a journey not only back in time to early in the last century, but also to a dramatic, frightening Italian landscape with four eccentric traveling companions. Ensconced by her forceful publisher Nigel in a rundown villa in the Italian town of Bomarzo, writer Daphne DuBlanc (Marilyn Mosley is her nom de plume) is stuck for an idea for her next Edna Rutherford mystery. It doesn t help that she has smoked the last of the hashish she secretly brought from Paris. Without inspiration I could not write. What was needed was a new batch of signatures, those curious messages our waking life sends us from our unconscious, which I have come to see as promptings from the muse, and even as a spiritual guide for my own existence. But as she begins to explore the villa, which is filled with priceless artistic treasures, and the neighboring 16th-century sculpture garden known as the Monster Park, Daphne finds signs and clues a broken head of a china doll, a pearl button, an ancient map to deeper mysteries about this strange place and its inhabitants: the gatekeeper Manu and his daughter Amelia, Professor Firestone, an American art history scholar writing about the Monster Garden, Clive, a novice painter, and even the down-at-heel aristocratic Nigel. Verdict Deftly mixing fascinating art history and murder with an exotic atmospheric setting (the Bomarzo garden actually exists), dramatic historical period (1928 fascist Italy), and fully fleshed characters, Lappin (The Etruscan) has written a hallucinatory gothic mystery in which no one is as they appear. Daphne is a most memorable, if a bit unreliable (thanks to her opium habit), narrator. Readers looking for an intelligent summer mystery will find much to savor here. --Wilda Williams, Library Journal --This text refers to an out of print or unavailable edition of this title.

Linda Lappin, poet, novelist, essayist, travel writer, and literary translator was born in Kingsport, Tennessee. She received her B.A. from Eckerd College in St. Petersburg, FL, and her MFA from the University of Iowa Writers Workshop. where she also worked as a translation assistant to the International Writing Program. A former Fulbright fellow to Italy, she currently divides her time between the US and Italy, where she has taught English in Italian universities for over twenty years. Her essays, reviews, and short fiction appear regularly in US periodicals. Her short fiction has been broadcast by the BBC World Service Radio. She is the author of two critically acclaimed novels, THE ETRUSCAN, a literary gothic tale, and KATHERINE'S WISH, a novel based on the life of Katherine Mansfield. She is currently at work on a second Daphne Dublanc mystery novel, MELUSINE, set in Bolsena, and on a memoir, titled POSTCARDS FROM A TUSCAN INTERIOR. --This text refers to an out of print or unavailable edition of this title.

travelscribe
5.0 out of 5 stars Signatures are everywhere
Reviewed in the United States on 23 June 2014
Verified Purchase
Signatures in Stone is a wonderful novel. Through sometimes dream-like, sometimes almost visionary, and always beautiful prose and imagery, Linda Lappin weaves a story that grabs the reader right away, and pulls us into not just the story but the lives of its characters. Our main point of view is a woman whose perceptions may or may not be 'real,' and this creates a wonderful sense of possibility as she - and we through her eyes - explore the garden of Sacro Bosco in Bomarzo, Italy, to discover the truth that wraps itself around time and the iconic and frightening statues that are witness to events both dreadful and mundane. Is it murder or is it imagination? Does each item we see mean something, or is it simply an object left behind by another person in another lifetime? This novel carries the reader through these questions in search of one of life's many puzzles: what is the meaning, and can we understand events in our own lives, or others' lives, through the things - and people - we leave behind? Let this story surround you, and find out.
Read more
Report abuse

Adri Barr Crocetti
5.0 out of 5 stars A page turner set in Italy
Reviewed in the United States on 4 September 2013
Verified Purchase
An old villa, a victim of time, 6 people, victims of themselves and a white cat - these are the characters in Linda Lappin's newest mystery, Signatures in Stone. Ms. Lappin takes the reader to Bomarzo, Italy. It is the late 1920's and Daphne has arrived from Paris with her agent and close friend Nigel. She has made the trip in the hopes of clearing her hashish muddled head and setting pen to paper to write her next novel. But Nigel has brought a friend along. His friend is Clive, a Texan with brushes and easel and an eye for women. Before she knows it, writing gives way to temptation as Daphne and Clive become lovers, and no writing is done. But almost as soon as it begins, the affair ends as Clive takes up with the rude and distant servant girl Amelia, owner of the white cat. Amelia, it would seem, is intent on making Daphne's stay at the villa as unpleasant as possible. But Amelia has a dark secret in her past, one that follows her and informs almost her every move.

Another guest at the villa is Dr. Finestone, an academic directing the renovation of the The Sacred Wood, an overgrown Renaissance garden filled with phantasmagorical sculpture. Daphne finds herself drawn to the garden, visiting it day and night. All is not beauty and light at the villa. Manu, the gruff and sometimes violent manager of the villa has a secret too. Soon Daphne is drawn into a world, part dream, part reality, and the reader is drawn along with her. This book was a joy to read, a real page turner. Best of all, the ending was a complete and unforeseen surprise. Ms. Lappin is a master of the Gothic tale, and I can not wait for the next Daphne novel.
Read more
One person found this helpful
Report abuse

Michael E. Henderson
5.0 out of 5 stars An Excellent Read
Reviewed in the United States on 6 January 2014
Verified Purchase
This is a masterfully written cozy mystery that takes you to Italy. The descriptions of Italy are wonderful, and gives you the true essence of the place.

The story takes place in 1928. The heroine, Daphne, is a writer of mysteries living in Paris, who has a taste for hashish. She is having trouble completing her next book, so her publisher takes her to Italy to get her away so she can write in peace.

The fun starts when they arrive at a old rundown villa with a surly maid and a garden full of mysterious statues.

The story slowly and beautifully unfolds, and is expertly told. Some of the best writing I've seen in a while.

(Comment to the publisher: there are more typos in the text than one would expect from a bona fide publisher. In fact, the first word is a typo. It should be "We," rather than "He." I know this because it makes sense in the context, and I heard the author read part of the first chapter in Rome.)
Read more
Report abuse
See all reviews
Back to top
Get to Know Us
Make Money with Us
Let Us Help You
And don't forget:
© 1996-2021, Amazon.com, Inc. or its affiliates