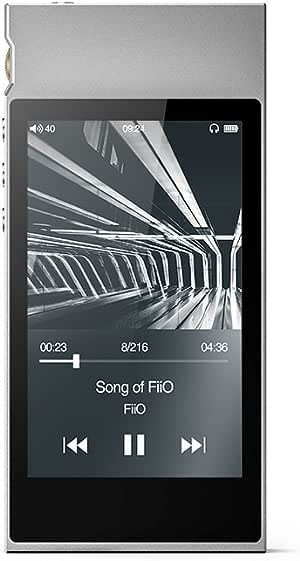 A Fully Modern Technological CoreThe M7 is FiiO's first player to use Samsung's Exynos 7270 Soc,made on the 14nm FinFET process for greater power efficiency and better bettery life.The next step in audio:high fidelity wirelessThe M7 utlizes a Samsung Bluetooth 4.2 chip that supports the aptx-HD ,also supports Sony's LDACESS Sabre 9018 chip for unsurpassed sound qualityDiscover a whole new world of FM radioWithin the M7 contains a dedicated FM chip ,the Si4705.FM frequencies covered is the broad range of 76MHz-108MHz,which is essentially all of the possible spectrums used around the world.*please insert your headphones into the M7 to enable FM functionality.*20 hours player time,40 days Standby time, a USB Type-C connector for connectivityFull touch screen operationSwipe up from the bottoom-left of the screen to go back one leve.Swipe up from the bottom-right of the screen to return to the home/main screen.

4.0 out of 5 stars
4 out of 5
138 global ratings
How are ratings calculated?
To calculate the overall star rating and percentage breakdown by star, we don’t use a simple average. Instead, our system considers things like how recent a review is and if the reviewer bought the item on Amazon. It also analyses reviews to verify trustworthiness.

TomB
5.0 out of 5 stars Vastly improved with Musicolet instead of FiiO Music App
Reviewed in the United Kingdom on 19 February 2020
Verified Purchase
Firstly, the hardware is great. For such a small package it's sturdy and surprisingly snappy navigating around.

The FiiO Music App works fine, is surprisingly fast even with 12,000 songs but there are a few slightly annoying features:

2. The shuffle feature doesn't use queues. So if you shuffle a 10 song album, you might get the tracks 1, 2, 1 because it just picks another song from the album at random, which might be one you heard a couple of songs ago.

3. It takes an hour to scan my 12,000 song library (not a huge issue really as when new songs are added you can just scan the new folder)

However, the headphone bug was show stopper for me as I couldn't just leave the player on and had to keep turning the screen on to press play.

I emailed FiiO about this back in November and after various emails back and forth they said "We'll get the engineers to look into it". I never heard back, and it was never fixed.

However, the most recent firmware does allow you to install third party apps.

I tried Musicolet and it fixes all my problems. There's no headphone bug, you can properly create a shuffled play queue and the interface is more consistent, easier to use and has more features. And it scanned my 12,000 song library in under 10 minutes!

The player is great but if you use Musicolet it's even better.

For anyone interested, to install it you have to:

K. Packard
5.0 out of 5 stars This FiiO M7 player is better by miles.
Reviewed in the United Kingdom on 17 July 2018
Verified Purchase
Bought to replace an old Sony Walkman mp player.
This FiiO M7 player is better by miles.
1 it has more internal memory, 32Gb int, add a MicroSD card too. I used a 64Gb which holds 80 or more full fat albums, not mp3 rubbish.
2 will play all my HiRes music tracks with ease, WAV, DSD etc
3 is easily a better quality product.
4 has an inbuilt FM tuner. Good depending on your reception and headphone cable.
5 goes plenty loud enough with my home SONY headphones, and my EMusic earbuds. I love loud music. Perfect.
6 plays gapless, unlike a lot of players that produce a miniscule silence between tracks.
7 charges internal battery via the supplied USB C cable. And lasts a long time between charges.
It's best to "drag and drop" music in Windows 7 using Explorer, the easiest way to assemble songs onto a card.

Dubster
1.0 out of 5 stars Could be a great player, let down by buggy software and truly awful customer service - AVOID.
Reviewed in the United Kingdom on 24 September 2018
Verified Purchase
The sound quality is great - let's get that out the way.
That's where the positives end.
I bought mine largely to listen to long concerts, DJ mixes and audiobooks.
So, for that, you need it to remember where in the mp3 you got to when you stop playing, so you can pick it up next time - it does this, but only by not having a proper standby mode. If you turn the thing off, it forgets your position, and then you have to try and scroll through the file which is buggy as hell and causes the player to crash.
If you leave it on, due to not having a decent standby mode, it eats the battery up and you come to use it again and youve got no power.
Everything seems to cause the software to crash.
You try and get support on it and you get no replies to your emails whatsoever.
All in all - an awful experience.
Read more
4 people found this helpful
Report abuse

Benfranklin58
3.0 out of 5 stars Radio not so good...
Reviewed in the United Kingdom on 25 October 2019
Verified Purchase
Like : the colour screen is responsive and nice to use
Don't like the set up very much, bit of a faff.
You can't play music that you've copied and pasted straight away, you have to add music files to the music app, either as a favourite, or as part of a new play list that you've got to make.
There are not many music players that have FM radio, and they might as
well not have bothered with this one, reception is terrible. Maybe with a software update from FiiO's website it can be improved. I will look into it.
I haven't had it long enough yet to know all the good and not so good bits, I'll have to update my review.
Read more
2 people found this helpful
Report abuse

Gary
5.0 out of 5 stars Excellent for the Money
Reviewed in the United Kingdom on 15 December 2018
Verified Purchase
You will struggle to find a better DAP for the money. The only negative I could find is it could do with a little more power to drive some headphones, but when I pair them with Sennheiser HD595's, Momentum Free, or Fiio FH1 they are excellent.

This is a no-nonsense DAP that has no WiFi and limited app's, but when just used for playing your high resolution files into a good set of headphones, with a good touchscreen on a solid unit they are unbeatable for the money.
Read more
2 people found this helpful
Report abuse
See all reviews
Get FREE delivery with Amazon Prime
Prime members enjoy FREE Delivery and exclusive access to movies, TV shows, music, Kindle e-books, Twitch Prime, and more.
> Get Started
Back to top
Get to Know Us
Make Money with Us
Let Us Help You
And don't forget:
© 1996-2020, Amazon.com, Inc. or its affiliates