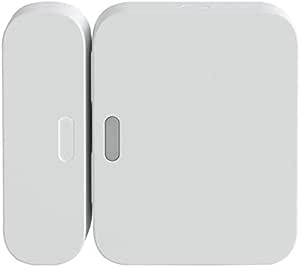 Brand: SimpliSafe
4.8 out of 5 stars 581 ratings
Secure transaction
Returns Policy
Amazon-managed Delivery
Your transaction is secure
We work hard to protect your security and privacy. Our payment security system encrypts your information during transmission. We don’t share your credit card details with third-party sellers, and we don’t sell your information to others. Learn more
Amazon-managed Delivery
Amazon manages delivery by using preferred couriers/agents. Order delivery tracking to your doorstep is available

Easy to install on every type of door or window. The magnet goes on the door or window, and the sensor goes on the frame (or vice versa). Magnet can be placed up to 2 inches from the sensor, so sensors fit on all types of doors and windows. SimpliSafe sensors come with the battery pre-installed and adhesive tape pre-applied, making set-up a snap.

4.8 out of 5 stars
4.8 out of 5
581 global ratings
How are ratings calculated?
To calculate the overall star rating and percentage breakdown by star, we don’t use a simple average. Instead, our system considers things like how recent a review is and if the reviewer bought the item on Amazon. It also analyses reviews to verify trustworthiness.

RGH in FTL
5.0 out of 5 stars Not as simple as it would seem and no Apple HomeKit support
Reviewed in the United States on 20 November 2020
Size Name: Pack of 1Verified Purchase
Not as simple as it claims AND NO APPLE HOMEKIT SUPPORT. After a lot of research, we made the wrong decision and went with SimpliSafe. The videos and online manuals made setup appear simple. We purchased one keypad , 8 entry sensors, motion sensor, doorbell, door lock, and camera. Much of it was very simple to set up and some of it even very impressive. However, it is not even close to being as easy as they make it look. If your able to use a phone app, it is much simpler to setup than naming your devices with the archaic input on the keypad.

Before I continue, let me reiterate that SimpliSafe does not work with HomeKit (Siri) although when we ordered our system this was supposed to be coming. Now everything I read says that basically Apple and SimpliSafe were not able to come to an agreement and there is no integration planned in the future (confirmed by tech support). This would have been a deal breaker as I would have never went with a system that doesn’t work with Apple.

Back to installation, don’t expect a couple of hours to install it. Plan on a full day. The lock is not nearly as intuitive as it seems to install and none of the adapters were exactly what the instructions said we needed for our brand new construction townhouse. We picked the one that looked most like the suggested one and luckily it worked. You are actually replacing a physical deadbolt and this can take some time.

The doorbell was very problematic. It repeatedly failed to connect to WiFi even though it is less than 8 feet from a repeater. The trouble shooter only offered the option of adding a repeater which we already had and was well within range. After less than two weeks the doorbell lost connectivity for no apparent reason. SimpliSafe support was very helpful even though they talk to you like you have no technology smarts at all, which is not my case. After walking me through a reset (tiny pin hole inside doorbell) that is not mentioned in any documentation I could find, we were able to get the doorbell back online and it has functioned correctly now for several weeks.

Latest is that the camera has now lost WiFi connection even though the camera hasn’t moved and nothing has changed with our WiFi. After three tries to add the camera, it refuses to join the network. Again it has a very strong WiFi signal. Another call to customer support is going to be required to get the camera back online.

Finally, the apps. We have the apps installed on an iPhone X, two iPad Pro’s, and Apple Watch 4. The phone app is just OK, but slow compared to other apps. There is no iPad app. You’re stuck with downloading the iPhone app meaning no horizontal use. Very disappointing. When the doorbell rings, I would expect the camera to automatically pop up on my phone. Nope. You get a notification and by the time the app opens and you can look at the camera, they are already gone. The Apple Watch app is totally worthless. It simply doesn’t work. Most of the time when you tap it is starts refreshing indefinitely. The couple of times that it did finish refreshing, the status of the alarm was totally wrong even though the phone had the accurate state of the alarm.

Do your research and don’t believe all the recommendations that SimpliSafe supposedly has. There are several other security systems that I have send discovered, or are newer, that promise a better experience and Apple HomeKit integration. We use a different system in our vacation home that is far superior to SimpliSafe.

CaliGirlSF
3.0 out of 5 stars Great sensors but horrible tape for install and install instructions are missing key info
Reviewed in the United States on 17 December 2020
Size Name: Pack of 1Verified Purchase
These are everything they are supposed to be: easy to install, slim, not visually unattractive, and they work well as an entry sensor. However, the sticky tape that comes with it is completely substandard. What no one told us is after spending the time to install them, after a few days and few weeks they “simpli” FALL OFF. While this is disappointing in itself, the bigger issue is that if your alarm is on - and they fall off, it WILL trigger the alarm. This would be terrifying when we’re sleeping and very unsettling when we’re not home (or able to get to the house when the alarm goes off). The cops would go to the house, etc. I wish this possibility had been mentioned in the simplisafe set up instructions for when we set these up the first time - it would have saved us a lot of energy worrying and removing all of them and then reinstalling in a hurry (before one triggers the alarm). Heres what you do: use the screws that come with the sensors. If you’re like us and don’t want to screw into your wood or walls, buy a strong tape like Gorilla brand or use silicon to attach them. You can also place the sensors at the bottom of your windows resting on the windowsill so theres less of a chance they will fall off (we had them at the top so gravity pulled them down!). Shame on you simplisafe for missing this very important bit of information for installation. Now we’ve soured on the brand and feel anxious when arming our system versus feeling safe.
Read more
2 people found this helpful
Report abuse

Turbotonio
5.0 out of 5 stars Real deal, and cheaper than ordering from Simply Safe
Reviewed in the United States on 21 October 2020
Size Name: Pack of 1Verified Purchase
Factory made Simply safe entry sensor, not a knock off. Happy to find on Amazon with free shipping, so it costs less than buying another from Simply Safe. Works like supposed to, easy to install as they all are. Just make sure u clean area u stick it to first. Keep ur home and family safe. And get yourself some guns to really keep ur family safe.
Read more
4 people found this helpful
Report abuse

Houndogg Wayne
5.0 out of 5 stars Easy-Peasy!!
Reviewed in the United States on 8 September 2020
Size Name: Pack of 1Verified Purchase
We’ve had security systems before, but for DIY, this entire system was very simple & easy to install and set up. Clear instructions and confirmation by the main tower. Camera has close to 180* view, motion detectors about the same. Any Tech support needed was fast and clear. Couldn’t ask for more!!!
Read more
4 people found this helpful
Report abuse

Paul E. Gallagher
5.0 out of 5 stars Great security
Reviewed in the United States on 25 September 2020
Size Name: Pack of 1Verified Purchase
I bought this extra sensor because I forget one more window to protect in my basement. I got the main system through Simpli Safe. It is a great system, easy to install, easy to use. I can control it and view the camera with my iPhone or iPad. Blends in very well with the house, you probably not know we had it I didn’t point in out.
Read more
2 people found this helpful
Report abuse
See all reviews
Get FREE delivery with Amazon Prime
Prime members enjoy FREE Delivery and exclusive access to movies, TV shows, music, Kindle e-books, Twitch Prime, and more.
> Get Started
Back to top
Get to Know Us
Make Money with Us
Let Us Help You
And don't forget:
© 1996-2021, Amazon.com, Inc. or its affiliates