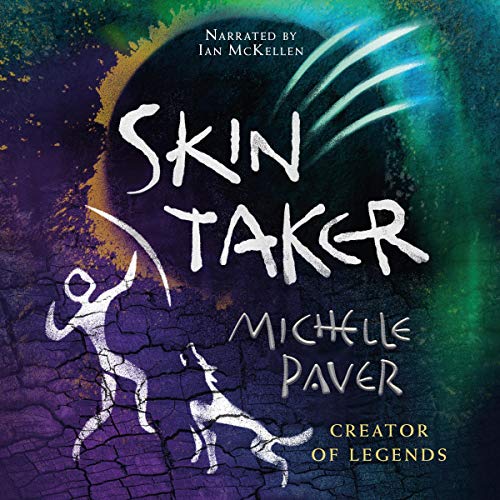 A boy. A wolf. The legend lives on. In the Dark Time of midwinter, something is coming that will test the Clans as never before. Book eight of Michelle Paver's best-selling Wolf Brother series continues the dazzling adventure of Torak, Wolf and Renn - a story full of myth, menace, natural magic and exhilarating entertainment.

In the Dark Time of midwinter, disaster strikes the Forest. Chaos rules. Bears woken from their dens prowl the shadowy valleys. Desperate clans battle for survival. Only demons thrive.

With their world in turmoil, Torak, Renn and Wolf are tested as never before. And as a new evil haunts the devastated land, Torak must risk his sanity, his life and even his souls to save everything he loves....

Skin Taker carries you back to the Stone Age, drawing you deeper into the astonishing adventure which began with Wolf Brother.

Read more
©2021 Michelle Paver (P)2021 Head of Zeus
Learn more about membership
By completing your purchase, you agree to Audible’s Conditions Of Use and Privacy Notice.
Sold and delivered by Audible, an Amazon company
Share

4.8 out of 5 stars
4.8 out of 5
165 global ratings
How are ratings calculated?
To calculate the overall star rating and percentage breakdown by star, we don’t use a simple average. Instead, our system considers things like how recent a review is and if the reviewer bought the item on Amazon. It also analyses reviews to verify trustworthiness.

tasmin
3.0 out of 5 stars Was alright
Reviewed in Australia on 18 April 2021
This story isn't something I'd normally pick up. But I found it very interesting. It was a nice quick read and I loved the writing style. It was almost poetic.
Read more
Helpful
Report abuse
See all reviews

Ryan at Empire of Books
5.0 out of 5 stars Bears and demons and skin takers, oh my!
Reviewed in the United Kingdom on 1 April 2021
Verified Purchase
It's a magical time that comes but once a year. It brings with it a sense of joy, but also fear. That's right! It's time for a new Michelle Paver book! The eighth instalment in the worldwide best selling Wolf Brother series! AKA Chronicles of Ancient Darkness. And boy, what a ride Skin Taker is! Right from the very first page, it is a tale of doom and gloom as a natural disaster befalls the Forest and our favourite characters are thrown right into the middle of all of the action as they attempt to drive the evil out of their home! I mean, you almost have to feel sorry for poor old Torak. Chosen by destiny to fight the Soul-Eaters and now that that task is done he still can't catch a break! Bears that would normally be asleep, hibernating, roam the trees. Whispers of evil beings known as skin takers are carried on the wind, fear causing the clans to do terrible things. And enemies that Torak may have thought he would never have to face again may be closer than he bargains for.

I'll make no apologies about it, I am a complete Michelle Paver stan, as I believe I have shown time and time again. Her words are just so well thought out and methodically placed but feel so lyrical, so effortless and they never fail to take me away from the real world and drag me into the world woven within the pages. Skin Taker feels a lot more claustrophobic than the previous books in my opinion. Yes you can read them separately but I believe to truly get the benefit from the story, you need to read them all. Torak has been trapped in caves before. He's been in some very sticky situations. But something about Skin Taker feels very different. Darker, quite literally at some points of the book. Torak and Renn are in the Far North, probably one of my favourite parts of the world that Michelle has created. It's chill just seeps from the page into your bones. Michelle always has such a way of describing the settings, the weather, that just makes them feel so real, so tangible.

I read the book in early December last year, during a particularly cold week and this only added to the feel of the book for me, as the cold seeps in and all hope seems to fade. These characters are some of my favourite I have ever encountered in any series. Yes, we all love Torak, Renn and of course, Wolf. But the supporting cast beyond the main trio are also a brilliant mix. As ever Fin-Keddinn is spellbinding. Dark continues to intrigue and with a host of new characters thrown in, showing different degrees of humanity in the pre-historic setting there is someone for all readers to fall in love with! I really felt for them all the way through this book, facing such adversity and having no choice but to pull together, regardless of clans and beliefs was so interesting to read, especially given the timely aspect of coronavirus and how it is bringing us all together as well!

Every time I read one of these books, it doesn't matter which one, there is always such a sense of safety, of coming home, and honestly it's a feeling I cannot get enough of. Even in the darkest moments, the Forest is a welcome respite from the real world. I can almost smell the tang of pine blood, hear the voices of the trees as they chatter among themselves as I pass.

Can we talk about that cover for a second! I mean! COME ON! John Fordham knocks it out of the park every time. This has to be my favourite cover of the series so far. The colours used. The overall feeling, and especially given that I have read the book, the actual meanings in the cover itself. Fantastic! These have to be some of my favourite covers I have ever had the fortune to own. So unique and easily identifiable within the book world, as well as being fun. Absolute pieces of art in their own right. I'd love to one day get them all framed or something, they're just stunning!

I can never truly get out just how I feel about the books because it just becomes such a gush-fest. I just love them so much. Last year a tv adaptation was announced and with work on that continuing, I can only hope that the team behind it do these characters and the world, and of course Michelle's work, justice and helps to bring a whole new audience to these fantastic books. Yes, they're worldwide bestsellers, but in my opinion, they do not get the recognition they deserve!

Atmospheric, exhilarating and a complete page turner, Skin Taker is Michelle Paver at her very best. With one last instalment (for real, this time!) due next year, Wolfbane, there are no doubt thrills aplenty still to come. I don't know if I am, personally, ready to say goodbye to these characters that I adore so much. I've done it once before with Ghost Hunter, yes, but getting to walk alongside them on their adventures again has been such a wonderful experience. These characters and indeed the books mean a great, great deal to me so it'll never really be a goodbye, as I reread them quite often actually, but the thought of no more new adventures. Gives me chills far worse than those you experience in the Far North, let me tell you! All I know is that I trust Michelle and know that we are in safe hands, so I will walk confidently into the Forest once more to await the fate of our beloved characters!
Read more
8 people found this helpful
Report abuse

Palumbex
5.0 out of 5 stars Perfection.
Reviewed in the United Kingdom on 22 May 2021
Verified Purchase
Michelle Paver writes like no other author I have read, her strength is in a providing a diaphanous web of intrigue and wonder which flows through her characters and storytelling.
It is a wonderfully immersive experience to spend time with the main protagonists and their clans. The scenery is a visual delight constructed by both the reader and the author which stays long after the final chapter.

I have long been an admirer of the true spirit of adventure and the fascinating depth of knowledge which seamlessly combine in the imagination of Michelle Paver. Her creative process is truly unique.

I would advise every parent to encourage their children to read, discuss and be illuminated by reading this wonderful series of books.
Read more
Report abuse

Shiehjenli
5.0 out of 5 stars Worth Paying Extra for the Hardback
Reviewed in the United Kingdom on 9 May 2021
Verified Purchase
I was so excited about it, I pre-ordered it in hardback but had somehow missed "Viper's Daughter" coming out, so had to read that first. As ever, Michelle Paver recreates the Stone Age in loving detail, and kept me gripped throughout. I have always loved the sections written from Wolf's point of view. I gather there will be a final book coming out next year. I can't wait, but know I'll feel sad that there will be no more in the series.
Read more
Report abuse

mr michael j atkins
5.0 out of 5 stars Fantastic! Another compelling and moving adventure.
Reviewed in the United Kingdom on 19 April 2021
Verified Purchase
What a delight to be able to return to the world of Wolf Brother once more. The sense of a living and breathing world is always so strong in Michelle Paver's books, it really grounds the magic and the mysterious that also haunt the pages. Beautifully balanced observations and heartstopping action, with the ever deligthful insight into Wolf's inner world, makes this a compelling read: I read in one long sitting. And lovely illustrations as well.
Read more
Report abuse

Chirpy
5.0 out of 5 stars Top series of books.
Reviewed in the United Kingdom on 14 May 2021
Verified Purchase
This series is superb and the latest instalment does not disappoint. It is rare to write a series that appeals to such a wide age range, but Michelle Paver has succeeded in doing so. Very readable.
Read more
Report abuse
See all reviews
Back to top
Get to Know Us
Make Money with Us
Let Us Help You
And don't forget:
© 1996-2021, Amazon.com, Inc. or its affiliates