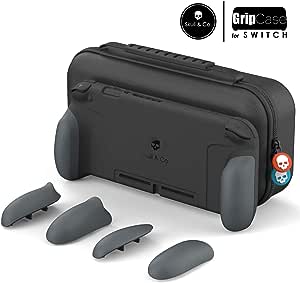 Three types of replaceable grips:
The SnapGrip is a basic set for the most players and games. And the TriggerGrip provides stronger grip force, it is designed for players with bigger hands and play hardcore games very often.The PlusGrip is designed for massive-hands players.
All grip sets are made of hard PC (polycarbonate) with texture on the surface, which gives players a similar feeling of holding a XB1 or PS4 joy-con.

Protection:
The GripCase is made of soft TPU (Thermoplastic polyurethanes) material. It will not scratch your SWITCH like the hard plastic does. Most important, our GripCase is easy to put on and remove, convenient for gamers to take the case off when they intend to switch between different gaming modes.

--Mesh Pocket Upgrade: you are able to put small stuff in the mesh pocket without falling. We also upgraded its material, using the 3-layer sandwich mesh instead of the 1 layer mesh. The sandwich mesh is 1mm thick, has 2 mesh layers with a sponge layer in the middle, which provides great protection to your console.

4.7 out of 5 stars
4.7 out of 5
1,440 global ratings
How are ratings calculated?
To calculate the overall star rating and percentage breakdown by star, we don’t use a simple average. Instead, our system considers things like how recent a review is and if the reviewer bought the item on Amazon. It also analyses reviews to verify trustworthiness.

Peter C
TOP 50 REVIEWER
5.0 out of 5 stars Fantastic grip and sturdy case
Reviewed in Australia on 26 September 2019
Size Name: GripCase & MaxCarry CaseColour: GrayVerified Purchase
The quality of this grip and case is definitely above others that are similar (well, maybe on par with tomtoc ones though)

The CASE:
* big (too big? Too bad the grip doesn't fit in any "slim"cases but I guess that's expected)
* premium materials, inside is mushy and pleasant to touch, the pouch separation is thicck (you can actually squish it, so whatever you put in the top pouch won't damage the console + it comes with screen protection flap
* tons of space inside
* separator flap acts as a lift-up stand too, but unless you have an L-shaped USB-C cable it won't work well with charging
* Zipper has nice colour accents
* Fantastic for family visits to entertain kids who don't have a Switch, fits extra joycons, straps, USB-C HDMI dongle, cables and a powerbank just fine

The GRIP:
* Easy on-off (I've tried a different one before which was a pain to put on and made it fell like you could break L/R buttons. This is not the case here - it really pops on and off easily
* Changeable grips are a huge bonus. I stayed with default ones even though my hands are quite large, the biggest size just didn't fit me. But I can see the smaller size being a big plus for some and it's fantastic to have the option
* Grips come in different colours (sadly I only have grey ones atm)
* Slides fine into the Dock

Negatives:
* You can't plug in any USB-C Bluetooth Headphone transmitters directly with the grip on, they won't stay attached (you can try extenders / adapters though)
* You better disconnect USB ports from the dock before docking a gripped Switch. It completely blocks both USB ports on the side (kinda expected but not mentioned anywhere)
* Still not sure if I like that there's an extra layer of cover on L/R, volume and power buttons. I kinda got used to it, but the feeling isn't the same as with "naked buttons"
* Wish I could order grip colours at a reasonable price

Amazon Customer
4.0 out of 5 stars Would be 5 stars but...
Reviewed in Australia on 14 May 2020
Size Name: GripCase & MaxCarry CaseColour: Neon Red & BlueVerified Purchase
My only real complaint is about the zip case. You cant see the names of your games. You think it won't bother you. You think you can remember which game is which.. but I always end up finding the game I want last, and I only have 6 games :)

I suppose some diy with some clear pvc could be a project.

Great quality case, great cover. I can't find a better one. I only recommend this for people who have extra joycons to use, as it's annoying to remove this case. I would worry that the case or switch could get damaged from removing and putting it on it all the time. Mine is permanently on.

The switch docks absolutely fine, it's snug but I've had no issues.

You can't use the top USB slot on the dock with this case, but you can use the bottom one (very tightly) and the one inside on the back of the dock obviously. I've also thought about using a heat gun and melting the left plastic handle part to make an indent so that you can use the usb port... I may do that sometime.

Barry Honey
4.0 out of 5 stars Fits great, unless you use a Hori D-Pad Controller
Reviewed in Australia on 22 November 2020
Size Name: GripCase & MaxCarry CaseColour: GrayVerified Purchase
The case is really well made, with innovative replacement grips (Triggers where my favourite) - but if you use a Hori D-Pad controller as one of your joycons; the case doesn't quite fit. The left button (not ZL) doesn't quite align so it either sticks or is unusable. This is a shame. If I took a craft knife the coverings, it may fit better. I don't understand why the the joycon shoulder buttons needed to be covered though. The quest for the perfect case continues!

It does fit in the dock quite well, a lot smoother than other cases. The carry case though is excellent! Big, but fits so many accessories, including the Switch in it's protective case (and many others). If you just use the standard joycons this would be a 5-star product.
Read more
Helpful
Report abuse

Matthew Overington
4.0 out of 5 stars fantastic, with some small issues
Reviewed in Australia on 28 February 2020
Size Name: GripCase & MaxCarry CaseColour: Neon Red & BlueVerified Purchase
- case fits perfectly, great selection of grips, is very comfortable, and the pads over the triggers are fantastic
- carry case is sturdy, spacious, and a good way to keep everything together
- everything is high quality
- BUT cartridge slots are not see through, will need labels or a good memory to know which games are which
- and docking with the case on is very tight and prevents you from using the usb ports on the side of the dock
Read more
One person found this helpful
Helpful
Report abuse

sam bevan
5.0 out of 5 stars Awesome product!
Reviewed in Australia on 5 February 2021
Size Name: GripCase & MaxCarry CaseColour: GrayVerified Purchase
Love everything about this set. The case looks great, the quality is great and the grips make the Switch so much more comfortable to hold, I do not know how I ever lived without them. The case is large enough to hold the switch, charging cable, with some dedicated card slots make it the ideal travel companion. I have been using this set for over 12 months now and still loving it. Highly recommend!
Read more
Helpful
Report abuse

Garnzzz
5.0 out of 5 stars Multiple grips
Reviewed in Australia on 19 August 2019
Size Name: GripCase & MaxCarry CaseColour: GrayVerified Purchase
I had been looking for a grip case since vanilla switch felt small in my hands

My current set up with this grip case is using the trigger grip as it has been the most comfortable set up.

The vanilla grip that is already attached to it feels nice, but with my big hands, it strained my wrists
Read more
One person found this helpful
Helpful
Report abuse

Brett Clearwater
4.0 out of 5 stars Best case ever. No more sore palms!
Reviewed in Australia on 17 October 2019
Size Name: GripCase & MaxCarry CaseColour: Neon Red & BlueVerified Purchase
Awesome case for handheld gamers! I found holding the switch in my hands for long times would start to hurt in my palms. Not anymore! My only very small nit pick is it can be a very tight fit to dock it. It says you can dock without removing case which is true but unless you have some padding (felt) on the front of the dock i feel the tight fit might scratch the screen on front. Over all, AWESOME!
Read more
Helpful
Report abuse

Sandra
5.0 out of 5 stars l love this
Reviewed in Australia on 22 October 2020
Size Name: GripCase & MaxCarry CaseColour: GrayVerified Purchase
no more will l suffer numb hands and feel my joycons are warping due to prolonged handheld mode. a lifesaver for these with adult hands.

J. Kuca
2.0 out of 5 stars Disappointing.
Reviewed in the United Kingdom on 15 October 2020
Size Name: GripCase & MaxCarry CaseColour: Neon Red & BlueVerified Purchase
Lets get the good stuff out of the way.

The carrying case is solid, and has more than enough space to carry everything that you might need for a portable experience. The comfort that the grips offer, over simply clasping onto the joycons themselves, are also a night and day difference, for the better.

But, here is why I returned the items. It feels cheap, and caused a lot of unexpected issues.

The case is made out of a soft, flexible plastic. This means that when you are playing, it shifts and bends ever so slightly, which I found to be incredibly distracting. It is also not flush with the controllers either, so there was a slight lip which dug into my hands after a while.

I would also mention that whilst I have heard a lot of people mentioning how they had trouble with the L and R buttons being a little stiffer, my main issue was that when I tried to turn down the volume, it would also press on the power button, putting the Switch to sleep.

And whilst my switch dock would allow me do dock the console with the case on, it felt like a really, really tight fit, and I didn't quite trust that it wouldn't scratch the screen up, like I have seen a few people report.

Honestly, this feels like a great first step. A first generation. A flawed gem. But not good enough, yet.
Read more
6 people found this helpful
Report abuse

The grip on the other hand is not, the L and r buttons feel way too squishy you can't press the volume down button without also pushing down the power button which disconnects you in most online games.

Mario Lopes
5.0 out of 5 stars Best case for nintendo switch
Reviewed in the United Kingdom on 3 September 2020
Size Name: GripCase & MaxCarry CaseColour: GrayVerified Purchase
Almost perfect!!! In my opinion its the best case for switch. Just wished that it could cover the edges a little bit more. But its amazing
Read more
Report abuse

Alucard300
5.0 out of 5 stars Elegant and functional case for the Nintendo Switch
Reviewed in the United Kingdom on 29 November 2020
Size Name: GripCase & MaxCarry CaseColour: GrayVerified Purchase
I own a few other Nintendo Switch cases, but this one is now probably the highest quality case that I own. I love the feel of the material, as well as its practical and ergonomic design. Highly recommended.
Read more
Report abuse

norman hurl
5.0 out of 5 stars really happy with it
Reviewed in the United Kingdom on 25 August 2020
Size Name: GripCase & MaxCarry CaseColour: Neon Red & BlueVerified Purchase
Really good grip and case. Puts others to shame.
Read more
Report abuse
See all reviews
Back to top
Get to Know Us
Make Money with Us
Let Us Help You
And don't forget:
© 1996-2021, Amazon.com, Inc. or its affiliates