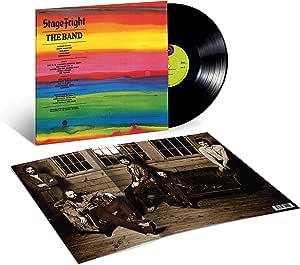 Secure transaction
Your transaction is secure
We work hard to protect your security and privacy. Our payment security system encrypts your information during transmission. We don’t share your credit card details with third-party sellers, and we don’t sell your information to others. Learn more
Details
Ships from
Amazon AU
Sold by
Amazon AU
New (10) from
$35.94 + $3.00 Delivery

4.7 out of 5 stars
4.7 out of 5
325 global ratings
How are ratings calculated?
To calculate the overall star rating and percentage breakdown by star, we don’t use a simple average. Instead, our system considers things like how recent a review is and if the reviewer bought the item on Amazon. It also analyses reviews to verify trustworthiness.

TCH
4.0 out of 5 stars Excellent upgrade of The Band's most underrated album......
Reviewed in the United Kingdom on 14 February 2021
Verified Purchase
The Band's 3rd LP, "Stage Fright", has always been underrated in my opinion especially in comparison to its slightly overrated predecessor, the eponymously titled "The Band", which I find slightly lyrically pretentious despite its very obvious musical qualities. In comparison apart from a couple of Americana "story songs" the Band's 3rd LP is grounded firmly in 'reality' mirroring the difficult circumstances of its conception with lyrics dealing in disillusionment and ennui, as the group began its slow and ultimately tragic fracture, despite the often upbeat music. Apart from a single underwhelming song, "Time To Kill", this LP has grown on me over the years to the extent I think it is arguably their best work with certainly two of their best ever tracks, "Stage Fright" itself and "The Rumour" and alot else besides only slightly behind these two stone classics.

The new remaster is very fine and whilst the reordering of the track list has been controversial in that it allegedly mirrors the demands of Robbie Robertson's ego I don't really have any problem with it as it puts the two best tracks (see above) on the first side and pushes "Time To Kill" to the latter half. More to the point the 2nd disc providing 20 tracks from a 1971 Royal Albert Hall concert is absolutely stellar (!) and I would say the best live Band performance on disc to date without any of the self-important portentousness of the "Rock Of Ages" live set from the same year. It just provides ample evidence of what incredible road warriors they were with almost flawless performances of a selection of tracks selected from their 1st three LPs and two Motown covers with even "Time To Kill" sounding energised and on the money! Incredible stuff and well worth the price even without the (excellent) original album on Disc #1.

Finally there are 18-minutes of "Calgary Hotel room rehearsals" tagged onto the end of the 1st disc. They are..... "interesting" and remind of the scene on the 'Festival Express' DVD of Rick Danko having a high old time singing and laughing with Janis Joplin with a bunch of hangers on (he really was quite a character and such a great, great singer!) but nowhere near as memorable as that priceless 5-minutes of film. Furthermore the rehearsals are in rather middling sound so nice to hear once but not much more I suspect but still I rather have them than not so I much appreciate the consideration of the compilers in including them.

Brett C.
5.0 out of 5 stars A Troubled Classic Restored - In Which The Band Enters The Arena Of The Unwell
Reviewed in the United Kingdom on 16 February 2021
Verified Purchase
Band fans are a notoriously obsessed group. We will fight to find the good in anything they released (even the odds-and-sods contractual obligation effort Islands!)

But there was always something naggingly not-quite-right with Stage Fright. Where Music From Big Pink and The Band had opening tracks that felt like the first chapters of a great story, their third album opened with Strawberry Wine - an accordion-driven rocker that was slight at best and certainly the album’s weakest track. The rest of the album did not flow either. While there were standout tracks, the story they told was submerged.

So my ears pricked at hearing of a revised song order. While this album was not the stone classic its two predecessors were, I’ve always listened to this one more - as someone who came of age in the 90s, the sense of darkness in these songs and their more personal tone is perhaps more in touch with our times.

I’m happy to say that this wonderful re-jig is one of the most interesting reissues by any major rock group. While some fans might balk, this album is much improved by the update. There is a clarity in the narrative these songs now tell - one that clearly states the trouble which only peeked out of the original.

Now starting with The W.S. Walcott Medicine Show, listeners are welcomed into the circus of fame in which the group found themselves following the release of their genre-defining second album. Though fun on the surface, there is already something double-edged, a hint of menace, in its image of dancing girls with diamonds in their teeth, and who are pure gold down underneath.

The Shape I’m In brings this undertone out into the open and gets more personal with its story of the consequences of fame and success. Daniel And The Sacred Harp takes an allegorical view of the same theme - of someone having lost something essential by quest’s end.

Trouble continues with Stage Fright in which even the one place The Band always excelled - onstage - becomes a place of fear. There is also a nice echo of Daniel with its line - “..they gave this ploughboy his fortune and fame, since that day he ain't been the same.”

Completing Side 1, The Rumor - always and still the best track on the album - sees poison entering the bucolic haven the group had found in Woodstock.

While Side 2 takes a breather and adds a bit more shade with Time To Kill and All La Glory - both stories of domestic contentment - the dark smoke is coiling along with a suggestion that the life of ease and peace they’d earned might be just as bad as the roads they’d travelled to get there. History would reveal the tragic result.

Strawberry Wine (with its coded heroin allusions and the sloppy playing that underscores the real story here) works better in this order. Where it was inconsequential in its original position, it now leads thematically into Sleeping, the last original song a failing Richard Manuel would contribute to a Band album. Balanced between the pretty, quiet melody and the darker undercurrents of its lyric, it makes for a sublimely ambiguous final note - a precariousness that is so appropriate given what we now know about the poisons working at this revered group’s foundations.

I’ll leave it to the audiophiles to go into the improved mix. I’ll limit myself to saying that it is a wonderful new experience - each member is clearer in the layering. And while you might suppose the wizard-work of Garth Hudson would be the icing on the cake, it is Rick Danko’s bass that proves a standout here. What’s more, the improved clarity in the rhythm section further highlights the compressed bite and scratch of Robbie Robertson’s guitar.

There is also a remixed concert from the subsequent tour but I’ll save that for later. The news here is the bold decision to re-tell the story of this album, the group’s last studio masterpiece - one that will surely lead to some reassessment of its position in the trio of aces this influential group delivered

JOHN ROBERT GREEN
2.0 out of 5 stars A Robbie Robertson Rip-off
Reviewed in the United Kingdom on 13 February 2021
Verified Purchase
If you have the original, you might as well discard CD1, as it adds nothing. I can't hear much beyond a muddy mix and some extras of 'smacked out' musicians messing about. In addition, the new sequencing by Robertson is not as good as that of the original, and it now sounds like even more of an inferior sibling to the two earlier albums.

They were past their best by this stage of course owing to their ingestion of substances, but they did manage to pull off a decent concert at the Royal Albert Hall in 1971, which makes up CD2.
Read more
13 people found this helpful
Report abuse

G. C. Mcdonnell
5.0 out of 5 stars Inspired
Reviewed in the United Kingdom on 14 February 2021
Verified Purchase
I had always thought that this album was not a patch on the two that preceded it. However the remix has brought the album to life and reverting to it’s originally intended running order was a brilliant idea. The inclusion of the RAH concert finds the group in blistering form and is definitely superior to their other live recordings. Can hardly wait to see what Mr Robertson and Mr Clearmountain make of the Cahoots re-issue.
Read more
10 people found this helpful
Report abuse

Tom McRae
5.0 out of 5 stars Excellent music and lots of it
Reviewed in the United Kingdom on 15 February 2021
Verified Purchase
I was amazed at how fresh the original tracks sounded just by Robbie rearranging them into the order envisioned by him in the beginning. The remixed/remastered sound adds greatly to the overall experience.
The bonus tracks are enjoyable too, but for me the standout is the 1971 concert at the Royal Albert Hall - absolutely brilliant!
And all for £10.99!
Read more
7 people found this helpful
Report abuse
See all reviews
Back to top
Get to Know Us
Make Money with Us
Let Us Help You
And don't forget:
© 1996-2021, Amazon.com, Inc. or its affiliates