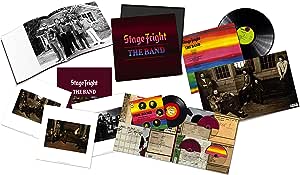 Secure transaction
Your transaction is secure
We work hard to protect your security and privacy. Our payment security system encrypts your information during transmission. We don’t share your credit card details with third-party sellers, and we don’t sell your information to others. Learn more
Details
Ships from
Amazon US
Sold by
Amazon US
Stage Fright (50Th Annive... has been added to your Cart
New (8) from
$194.00 & FREE Delivery

4.7 out of 5 stars
4.7 out of 5
29 global ratings
How are ratings calculated?
To calculate the overall star rating and percentage breakdown by star, we don’t use a simple average. Instead, our system considers things like how recent a review is and if the reviewer bought the item on Amazon. It also analyses reviews to verify trustworthiness.

Steve Scott
5.0 out of 5 stars Stage Fright - stage delight.
Reviewed in the United States on 21 March 2021
Verified Purchase
First off, may I say how delighted I was with the speed at which this album box set arrived. Within less than 10 days of my order, it arrived from USA to New Zealand. Amazing in these days of delayed-post because of the dreaded Covid virus. As The Band's 3rd album, it had a lot to live up to following the stunning debut Music From The Big Pink and The Band. However with the group becoming more popular by the year and following constant touring, lead guitarist and singer Robbie Robertson was now emerging as chief songwriter. And following months of touring basically impressions of the road inspired him to come up with the songs that make up Stage Fright. Initially it did not click with fans as quickly as the aforementioned albums did. But as they say, like a good wine it takes time and Stage Fright did indeed become a Band followers favourite. Just a mention of some of the tracks including the title track, The Shape I'm In, Time To Kill and the mighty All La Glory seal this album as a classic in my opinion. The added bonus of the wonderful crisp colour and black and white carboard-like photos of The Band and the informative LP sized booklet all go to make this set a most inspiring reflective document. The live CD of The Band at London's Royal Albert Hall in1971 is worth the hefty price of admission alone. This is The Band in all its live glory at a time when this group was still being hailed in all the right circles. Stage Fright 50th Anniversary is a pure gift in any serious music followers collection.
Read more
Report abuse

Mike mcginness
3.0 out of 5 stars Shipping damage
Reviewed in the United States on 15 February 2021
Verified Purchase
Obvious shipping damage, inside cover ripped. Also I never signed up for amazon prime so you can remove that. If you charge me I will contact my bank and dispute the charge. Thank you.Album is great, service gets 3 stars.
Read more
One person found this helpful
Report abuse

DDD
5.0 out of 5 stars Great box set.
Reviewed in the United States on 26 February 2021
Verified Purchase
Surround sound version well mixed. Great package for all rock music fans.
Read more
Report abuse
See all reviews
Back to top
Get to Know Us
Make Money with Us
Let Us Help You
And don't forget:
© 1996-2021, Amazon.com, Inc. or its affiliates