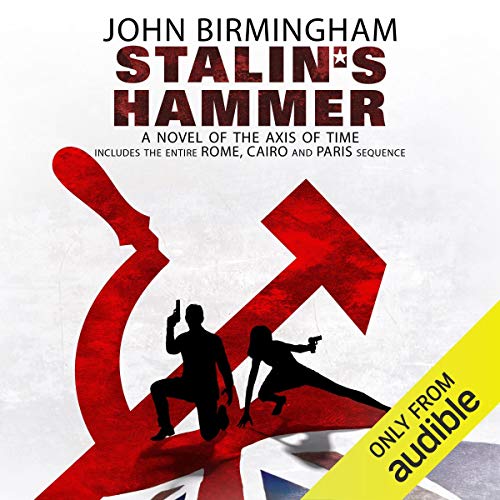 4.3 out of 5 stars
4.3 out of 5
132 global ratings
How are ratings calculated?
To calculate the overall star rating and percentage breakdown by star, we don’t use a simple average. Instead, our system considers things like how recent a review is and if the reviewer bought the item on Amazon. It also analyses reviews to verify trustworthiness.

Tony Calder
5.0 out of 5 stars A great continuation of the series
Reviewed in Australia on 15 April 2017
Verified Purchase
This is an excellent continuation of Birmingham's World War series, which is my favourite of all of John's books. This was originally published as three separate shorter books - Rome, Cairo and Paris (of which I had read only Rome) .

These stories are set some 10 years after the original trilogy finished at the end of the Second World War, and the uptimers are more integrated and the world, unsurprisingly, has developed along a very different path.

Whereas the first trilogy was a war series with strong science fiction elements, this is basically a classic Cold War spy story - the advanced technology brought from the 21st century is present but isn't as integral part of the story as in the initial trilogy.

I am eagerly anticipating the next books in this series.
Read more
Helpful
Report abuse

Bill M
TOP 500 REVIEWER
5.0 out of 5 stars Highly recommended.
Reviewed in Australia on 25 September 2018
Verified Purchase
This is a wonderfully written, no nonsense, pull no punches spy thriller that leads into WW3. It left me wanting to immediately read the next in the series, but alas....I will have to wait.
The book continues the story of Admiral Kolhammer's 21st century battle group's accidental arrival by wormhole into the middle of WW2. Ten years later, the Axis forces defeated, Stalin, still alive and with the knowledge of the future, is running amok.
Read more
Helpful
Report abuse

Brad
5.0 out of 5 stars All three of Prince Harry's rootin', tootin', Soviet-shootin' adventures together in one convenient location.
Reviewed in Australia on 25 January 2017
Verified Purchase
Set ten years after Birmingham's Axis of Time trilogy sent Prince Harry and an entire 2021-era multinational aircraft carrier battle group hurtling back to the dark days of World War II, Prince Harry, his former Regimental Sergeant-Major Viv and girlfriend Julia are kicking ass and taking names in a futuristic version of the late 1950s as Comrade Stalin and his merry men work to create a space-based weapons system.
Read more
Helpful
Report abuse

Squid182
4.0 out of 5 stars High tempo follow on from axis of time.
Reviewed in Australia on 22 March 2017
Verified Purchase
These 3 novellas have been a great catch up with old friends. Best enjoyed by readers of the original Axis of Time books, the story doesn't have its own legs to stand on. If you're familiar with the cast, you'll enjoy this dash through a. Alternate past. At the dnd, you'll be wanting more which is, I think, JB's Evel scheme...
Read more
Helpful
Report abuse

Nick
3.0 out of 5 stars It's ok...but not great
Reviewed in Australia on 21 February 2018
Verified Purchase
A bit slow for two-thirds of the book... but ends ok-ish. It's funny to see john stuggle to take account of changing tech since the first series - a bit clunky but that's not his fault... more an issue of setting the original series in the too-near future.
Read more
Helpful
Report abuse

Amazon Customer
5.0 out of 5 stars As good as ever
Reviewed in Australia on 27 March 2017
Verified Purchase
I've reread the Axis of Time series many times and never become tired of it. Stalin's Hammer continues the tale and is well worth the time. Of course, you'd better continue this, Birmingham, or else I'll find a way for the Quiet Room guys to make your life extremely difficult! Thanks, mate, for a rattling good read.
Read more
Helpful
Report abuse

Alex Tan
5.0 out of 5 stars Another good read
Reviewed in Australia on 9 January 2020
Verified Purchase
Totally enjoyed these short novels following on from the Axis of Time Trilogy! Waiting for more from John Birmingham.
Read more
Helpful
Report abuse

Mr Scott Bosher
5.0 out of 5 stars Must Read
Reviewed in Australia on 6 February 2021
Verified Purchase
This is a great book. Well worth the read. John Birmingham is a great storyteller!
Read more
Helpful
Report abuse
See all reviews

Donald
5.0 out of 5 stars A great story - and in one place
Reviewed in the United Kingdom on 26 January 2017
Verified Purchase
I have read the 3 individual books and now this version which takes the books and combines them into 1 collection.

The books are set around 10 years after the task force arrived, ripped from the 21st Century and put into the middle of the second world war, the novels don’t really need you to have read the original trilogy, though it does give you an idea of the characters.

The books are set in an alternative 1950’s full of technology ripped from ours, this book follows a mission in occupied Rome, think Berlin in our time, Cairo and ends in Paris. The main character is former SAS officer, and third in line to the Throne, before the act was changed, Harry Windsor and his girlfriend Julia Duffy and includes small cameos from famous people in the 50’s like Alex Guinness.

I really don’t want to give too much away as it might spoil your enjoyment of the book, if you like a novel with lots of action, adventure and one liners then get this book.
Read more
Report abuse

Michael W.
5.0 out of 5 stars Excellent update on the world 10 years after the 'arrival'
Reviewed in the United Kingdom on 2 January 2020
Verified Purchase
Once again a fast moving and well written page turner. Once started it was difficult to put down and it brings the characters, now 10 years older, into the mid fifties with action centred on Rome, Cairo & Paris. This book spends more time than the first three on just a few of the characters from 'future' which helps to understand their lives after such a drastic change. No spoiler here but unlike other authors who ensure the main players always make it through to the next book, this author doesn't. I bought the first three books in one go and read them over two weeks; this book lasted 2 days. I am now eagerly awaiting WW3.1 but can't find any info on when it will be released or even if it has been written yet.
Read more
Report abuse

Chris Harvey
1.0 out of 5 stars So disappointing.
Reviewed in the United Kingdom on 23 September 2018
Verified Purchase
I really enjoyed the first three books in this series. This one was a complete disappointment. Yes it’s set in the same alternate past but there the similarity ends.

It’s three stories about two super heroes (Prince Harry and Russian.) Who dispatch every enemy sent against them in a welter of blood and foul language. There is no big picture apart from a completely mystifying section on Stalin at the beginning of the book which is not referenced again.

If you liked the axis of time then don’t bother with this one.
Read more
Report abuse

M. Healey
5.0 out of 5 stars Axis of Awesome
Reviewed in the United Kingdom on 26 January 2017
Verified Purchase
For fans of John's "Axis of Time" novels this is more of the same, brilliantly written, brilliantly thought out, alternate history.
Prince Harry is on the case, and what a case it is!
I won't say too much as I don't want to spoil it, but if you like guns, girls, espionage, and great fiction to make you think, pick this up, you won't regret it.
Read more
Report abuse

Robert James Simpson
5.0 out of 5 stars I want more!
Reviewed in the United Kingdom on 21 May 2020
Verified Purchase
Loved the Axis of Time original WW2.x trilogy and had read them a few times so was delighted to discover this mini-trilogy. This is as good as the first three books and my concern is that there doesn't seem to be any info on the next instalment which this book seems to set the scene for perfectly.
Read more
Report abuse
See all reviews
Back to top
Get to Know Us
Make Money with Us
Let Us Help You
And don't forget:
© 1996-2021, Amazon.com, Inc. or its affiliates