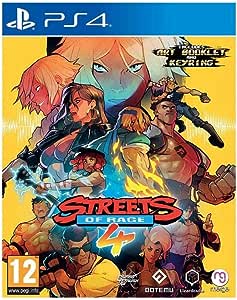 The standard Edition of streets of Rage 4 includes a reversible cover, an art Book and streets of Rage 4keyring.<Amongst the best beat'em up series ever created, jammin' '90s beats and over the top Street bat, the iconic series streets of Rage comes back with a masterful tribute to and Revitalization of the classic action fans adore.

the all-time classic streets of Rage, known as bare knuckle (ベア・ナックルbea nakkuru)in Japan, is a beat 'em up series known for this timeless gameplay and electronic Dance influenced music. Streets of Rage 4 builds upon the classic trilogy's gameplay with new mechanics, beautiful hand-drawn visuals and a God Tier soundtrack.

team up with iconic and brand-new characteristics of Rage 4 got its iconic characters back: Axel, blaze, and Adam teaming up with new brother and sister in Arms Floyd iraia and Cherry Hunter. With some brand-new moves and kickass tracks to take a listen, our heroes are ready to dish out beatdowns to a fledgling group of ill-advised criminals in full force.

one of your dreams is coming true. In addition to the 5 new characters, unlock and play your favourite pixelated characters from the previous streets of Rage games such as Axel, Adam, blaze, skate, Max and many more with their own retro sfx, in gorgeous HD hand-drawn urban environments. And for the full nostalgic experience, you will also be able to play with the music of the previous streets of Rage games!

streets of Rage 4 will be the first entry to the core series In 25 years, standing as Axel, Adam or blaze's glorious return to serving up side-scrolling beatdowns. With lush hand-drawn animations, new combat abilities, and fresh tracks from an amazing team of composers, streets of Rage 4 will be a masterful tribute to and Revitalization of the classic action fans adore. Epic line-up of legendary games composers the streets of Rage series is known for its electronic Dance influenced music around the world.

4.5 out of 5 stars
4.5 out of 5
287 global ratings
How are ratings calculated?
To calculate the overall star rating and percentage breakdown by star, we don’t use a simple average. Instead, our system considers things like how recent a review is and if the reviewer bought the item on Amazon. It also analyses reviews to verify trustworthiness.

Miss J. Fellows
5.0 out of 5 stars Fantastic!!!
Reviewed in the United Kingdom on 6 August 2020
Platform: PlayStation 4Verified Purchase
I'd pre-ordered this & I felt like a kid at Christmas waiting for this game to come out! Was & still am a massive fan of the original games & played them none stop as a kid! My favourite games ever! I was not disappointed by this new one at all! I spent hours playing it the day it arrived! I soon completed it over a few days! Loved it! I really did! The hand drawn game artwork & characters are really beautiful, love how there's 12 stages too so longer to play & enjoy it! I really love the music too! Its good! Gets stuck in your head! The makers have captured the perfect balance of nostalgia along with the newness perfectly! Spot on! A really amazing game & the best money I've spent this year!!! I absolutely love it!!! I really hope they make another!!!
Read more
4 people found this helpful
Report abuse

alex
1.0 out of 5 stars wrong copy!!
Reviewed in the United Kingdom on 5 August 2020
Platform: PlayStation 4Verified Purchase
You sent me the standard copy instead of the signature edition!!!!
Read more
8 people found this helpful
Report abuse

IFP
5.0 out of 5 stars Stage 4 clear...
Reviewed in the United Kingdom on 3 August 2020
Platform: PlayStation 4Verified Purchase
Great game. Was worried I wouldn't like the new animation style or that the game wouldn't 'feel' right however it looks and plays great. My son (who was massively skeptical and adamant that dad's favourite old game would be rubbish) has loved the couch co-op and relentless action just like I did when I was a kid. He has been begging me to play 2 player with him all day every. A few minor gripes include the absence of a 'call for back-up' special move and some of the bosses lacking the magic of the old games. Being able to play level by level also feels a bit wrong although there is an arcade mode to unlock. Overall this manages the near impossible job providing a nostalgia rush but also being good in its own right. 100% recommended.
Read more
2 people found this helpful
Report abuse

Matt
5.0 out of 5 stars Superb game. So addictive - back to the classic video games of the 90s.
Reviewed in the United Kingdom on 14 November 2020
Platform: PlayStation 4Verified Purchase
I loved the originals on my Saga Megadrive and I love this as well. The game play is the same, easy to pick up and play straight out the box, no fancy key combinations to master, just pure joy and fun. The new characters are great and the game play is the same, addictive and enjoying. Even in my 30s I still get so much joy out of this game, along with some frustrations when I can't defeat the end of stage bosses. The addition of online play is a great feature, enjoying it so much.
Read more
Report abuse
See all reviews
Get FREE delivery with Amazon Prime
Prime members enjoy FREE Delivery and exclusive access to movies, TV shows, music, Kindle e-books, Twitch Prime, and more.
> Get Started
Back to top
Get to Know Us
Make Money with Us
Let Us Help You
And don't forget:
© 1996-2020, Amazon.com, Inc. or its affiliates