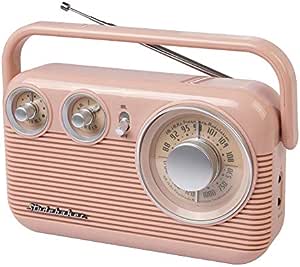 Classic retro design with many great features highlight this Portable AM/FM Radio. Model SB2003 has a compact, durable design and includes a carrying handle and telescopic antenna. Comes with a headphone jack and aux-in jack. Plus AC/DC power operation.

4.7 out of 5 stars
4.7 out of 5
197 global ratings
How are ratings calculated?
To calculate the overall star rating and percentage breakdown by star, we don’t use a simple average. Instead, our system considers things like how recent a review is and if the reviewer bought the item on Amazon. It also analyses reviews to verify trustworthiness.

Lynn Giroux
5.0 out of 5 stars great for seniors
Reviewed in Canada on 7 January 2021
Colour: Rose GoldVerified Purchase
my mother-in-law with Alzheimer's loved it. brought back childhood memories. easy to use and she loves music. thank you.
Read more
One person found this helpful
Report abuse

Deborah Jolie
3.0 out of 5 stars Buyer Beware
Reviewed in Canada on 14 February 2021
Colour: Rose GoldVerified Purchase
Not happy with this radio.
I ordered a pink one and received a white/blue one. Sounds tinny.
Wouldn’t recommend.
Read more
Report abuse

The Illusion of certainty
4.0 out of 5 stars Ease of tuning, addition of a headphone jack & an individual power switch. *
Reviewed in the United States on 8 January 2020
Verified Purchase
(*) These are improvements on the SB2003, 3 improvements from what is available on the Studebaker SB2001 model radio.

The tuning is getting easier on this model, (SB2003) but what I find is the performance of the internal DSP circuit is no different than the circuitry inside the Studebaker SB2001, so essentially, if the tuning ease isn't a big issue for the individual, then buying the Studebaker SB2001 is going to perform much like the SB2003, but with less touch on the tuning and the knobs on the SB2003 are easier to handle as they're not as "fat" as the knobs on the SB2001.

But then again, one might have a preference for either the design of the radio or the ease at which it can be tuned or controlled via the now smaller control knobs on the SB2003.

SB2003 still runs on house cord or 4 "C" batteries and something the other reviewer mentioned, it now in addition to the Aux in jack, now has a headphone jack, something missing from SB2001.

The lack of a headphone jack wasn't a deal killer for me on the SB2001 as I bought it to hear it through the speaker, not lug around a hefty radio for the purpose of using headphones of some sort.

But, however I do like that the people who design this series of radio have made improvements to the knobs, which was a big problem on the difficulty of use on the SB2001.

SB2001 was a huge leap forward as the DSP circuit was improved to weed out the problem on the SB2000 which was the radio would, (cycle off) cut out when turned up all the way, this doesn't happen on SB2001 or SB2003.

I'd be interested in the design of a model by "Spectra" that used the same DSP circuit, but made available a digital readout for more precise tuning of weak signals.

Currently I have to play with the dial as it won't "sit still" on weak AM signals and tends to go up & down in volume as it can't quite get a lock on weak signals, (I have the same issue with model SB2001 as well) but at least it does have some selectivity, just enough to pick up weak signals on AM, something most analog or digital display DSP radios are unable to do.
Read more
13 people found this helpful
Report abuse
See all reviews
Back to top
Get to Know Us
Make Money with Us
Let Us Help You
And don't forget:
© 1996-2021, Amazon.com, Inc. or its affiliates