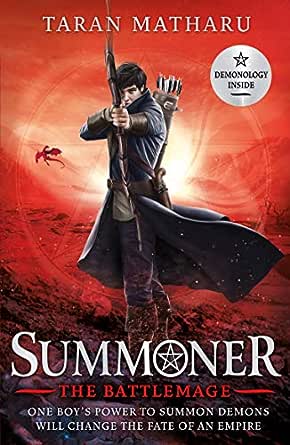 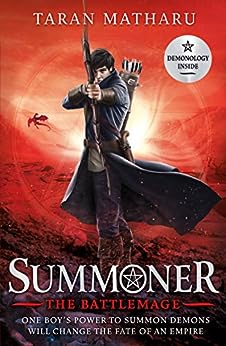 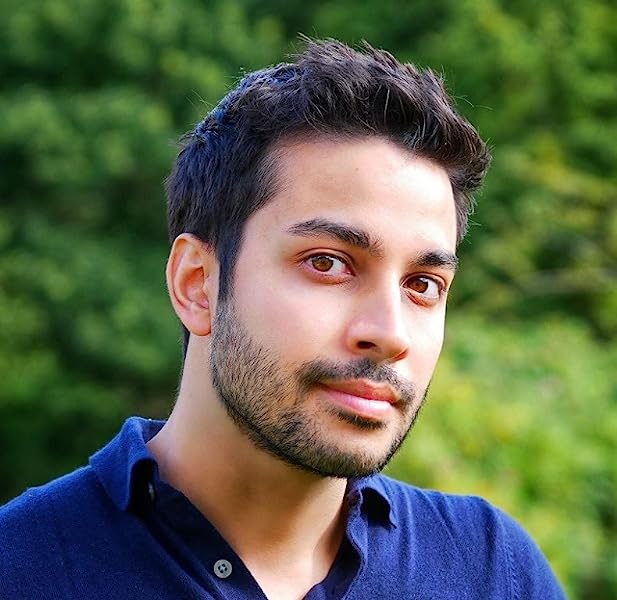 Taran was born in London in 1990 and found a passion for reading at a very early age. His love for stories developed into a desire to create his own, writing his first book at nine years old.At twenty-two, while taking time off to travel, Taran began to write Summoner, taking part in Nanowrimo 2013. Thanks to Wattpad.com and updating daily, its popularity dramatically increased, reaching over three million reads in less than six months. After being featured by NBC News, Taran decided to launch his professional writing career and has never looked back.The Summoner series has now been published in 15 territories and is a New York Times Bestseller. The Contender series is his second epic trilogy. --This text refers to the paperback edition.

THE NOVICE (Book 1 in the Summoner series): A New York Times Bestseller "The appealing characters, fast-paced plot, focus on racial politics, and interesting demon varieties (demonology addendum included) make this an enjoyable read." --School Library Journal "Fantasy readers should enjoy this entertaining, comfortably familiar-feeling adventure featuring an earnest soldier-schoolboy and his demonic sidekick." -- Kirkus Reviews "This plot-focused fantasy adventure will be a satisfying read for a wide age range of readers, especially fans of role-playing games and Christopher Paolini." --VOYA "Taran Matharu . . . racked up more than a million reads for his first novel, 'Summoner, ' in only four months." --NBCnews.com THE INQUISITION (Book 2 in the Summoner series): A fast-paced, familiar tale with strong echoes of Tolkien, Pullman, and Pokémon. --Kirkus Reviews
THE BATTLEMAGE (Book 3 in the Summoner series): A USA Today Bestseller
A New York Times Bestseller --This text refers to the hardcover edition.

Taran Matharu is the author of the Contender trilogy (The Chosen, The Challenger) and the New York Times bestselling Summoner series (The Novice, The Inquisition). He lives in London, England. --This text refers to the hardcover edition.
Read more

4.7 out of 5 stars
4.7 out of 5
979 global ratings
How are ratings calculated?
To calculate the overall star rating and percentage breakdown by star, we don’t use a simple average. Instead, our system considers things like how recent a review is and if the reviewer bought the item on Amazon. It also analyses reviews to verify trustworthiness.

Mrs Robyn M Barrington
5.0 out of 5 stars Really loved this story
Reviewed in Australia on 16 May 2017
Verified Purchase
Really loved this story. I was enthralled from the first book and impatient for each following. I expect the next book will be impatiently awaited by many. I felt myself in the story all the way as part of the resistance. would like to know what happens with the Forsyth twins and whether they get their come-uppance. How did their mother react to the return of her family member?
Read more
One person found this helpful
Helpful
Comment Report abuse

Hames
5.0 out of 5 stars Amazing book! Good for anyone 8-13.
Reviewed in Australia on 15 December 2018
Verified Purchase
I loved this book. Although, one annoying thing was that I was really hoping for Ignatius to evolve from drake to dragon in this book. Also, it left me wondering about the Forsyth twins? I assume they would be locked up for their roll in the attempted murder of Sylva and being bystanders to the whole Triumvate scheme. There were a few minor spelling mistakes but I assume the pages in question were checked by the editor late at night after a busy day at the office. All in all this book was amazing, and it all came down to endless creativity and exceptional writing.
Read more
One person found this helpful
Helpful
Comment Report abuse

krystina belford
5.0 out of 5 stars Great series
Reviewed in Australia on 5 June 2017
Verified Purchase
The whole series was excellent and this book was the perfect end to it. No spelling errors and just overall great writing
Read more
Helpful
Comment Report abuse

Michael Meehan
4.0 out of 5 stars A good read
Reviewed in Australia on 13 February 2018
Verified Purchase
follows on well from the previous books in the series, entertaining
Read more
Helpful
Comment Report abuse

Rani
5.0 out of 5 stars very good
Reviewed in Australia on 3 January 2019
l loved this book it was full of action and adventure any harry potter fans or lord of the rings fans or certain types of video game fans will adore this book like i
Read more
Helpful
Comment Report abuse

Amazon Customer
1.0 out of 5 stars realy
Reviewed in Australia on 18 May 2017
Verified Purchase
really im not sure if my doswnload got corrupt or something ut the spelling mistskes inthis are unforgiveable and wel other eise i love this book
Read more
Helpful
Comment Report abuse
See all reviews

Sean
3.0 out of 5 stars Disappointing after previous promise
Reviewed in the United Kingdom on 5 October 2017
Verified Purchase
Honestly, I was a little disappointed with The Battlemage.

It's the third book in a series which held a lot of promise. Following The Novice

Summoner: The Novice: Book 1 and The Inquisition  Summoner: The Inquisition: Book 2  - I enjoyed both of the previous novels in the series and this one promised a finale.
It just felt like the whole story was rushed. Perhaps Taran was under pressure to get a copy to his publishers, but the book leaves so many unanswered questions that I can't help but feel let down.

It's still an enjoyable book, but not fulfinning the promise of the previous two books. I believe that there will be another book out from Taran next year. Hopefully there will be a little more time spent on it, and questions answered from this.
Read it to finish the series, but don't expect great things sadly!

Jchidz
3.0 out of 5 stars Good but felt rushed
Reviewed in the United Kingdom on 5 June 2018
Verified Purchase
***Spoiler Alert ****The main character Fletcher is fairly average and doesn’t really do anything spectacular it just felt as if he stumbled his way through all three books, it would of been nice to see real progression in his powers but it remained really stagnant. The description of the different beasts you meet throughout the book and in the ether was really good. Would of been nice to see Ignatius progress alongside Fletcher and the two become a formidable force yet it wasn’t to be Ignatius remained kind of big and kind of a good demon to have through out the series until the end. The building of Fletchers town was a nice addition that’s where you can see fletchers progression from a common orphan to a lord but it lacked all the bits in between that make a good fantasy book. All in all not bad but more character progression was definitely needed.
Read more
Report abuse

JT Reviews
5.0 out of 5 stars OMG - AMAZING - I couldn't put it down :)
Reviewed in the United Kingdom on 11 August 2017
Verified Purchase
This is simply an amazing read! I don't normally write reviews but after reading this book, I just had to!!

Now I will not give much away but it has the perfect balance of excitement, adrenaline, magic, curiosity/wonder and courage. These books will relate to you (no matter who you are) and really does relate to differences in culture and beliefs that are relevant in our current and (very) real world. It is fresh and fast moving but the way in which it is written enables you to pick up where you left off and is easily digestible making this fun and enjoyable to ready to lose yourself in.

However, I could not imagine having to wait for the next book in the series to come out... if your going to buy this book, buy the first three at the same time because the suspense of where the book ends will drive you mad. The cliffhangers are that good!! To my understanding there will be six books in this series, I have written this review at the end of book three (The Battlemage) which doesn't end on a cliffhanger, still I cannot wait for the fourth book (The Outcast) to be released next year! All three books are brilliant. Truly fantastic!!!
Read more
One person found this helpful
Report abuse

James
5.0 out of 5 stars Good book, but not finale
Reviewed in the United Kingdom on 28 July 2020
Verified Purchase
I like the book series, and my hopes for this book were quite high.

Love the reintroduction, felt nice to be reintroduced to each character, I even started to ship Fletcher with Sylva and there were soo many moments in the book where it feels like the two friends would become BF and GF even thou it didn't happen, I'm still okay with that tho.

Next thing was that I did enjoy it, it felt more like a resolution to the orc threat and that's okay with me, in the first it was painted vividly that the orcs weren't going to be the final big threat it did more justice to both the orcs and Didric even tho he doesn't get the justice he deserves.

Overall this was a very good book, in my opinion, I felt like this book was the end of Fletcher's journey more or less. Well Done Taran, you made me cry.
Read more

Jo Quinney QmPR
5.0 out of 5 stars Thrill packed adventure.
Reviewed in the United Kingdom on 6 May 2017
Verified Purchase
A adrenalin filled adventure of the challenges faced by a boy who has magic, right up my alley. I loved the beginning when they were stuck in the either although I didn't like the idea of the lack of romance which would have been more exciting.
Read more
4 people found this helpful
Report abuse
See all reviews
Get FREE delivery with Amazon Prime
Prime members enjoy FREE Delivery and exclusive access to movies, TV shows, music, Kindle e-books, Twitch Prime, and more.
> Get Started
Back to top
Get to Know Us
Make Money with Us
Let Us Help You
And don't forget:
© 1996-2020, Amazon.com, Inc. or its affiliates