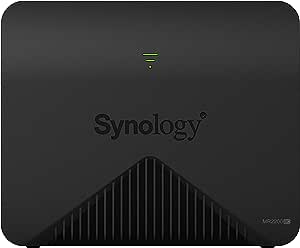 Embrace a whole Wi-Fi coverage in your home and office with the intelligent Synology Mesh Router MR2200ac. Designed with Tri-Band and MU-MIMO technology, MR2200ac makes sure your devices are on the fastest bandwidth dedicated to an optimized performance while keeping multiple devices reliably connected without any delay. Besides, you can enjoy the best Wi-Fi seamless roaming with a single Wi-Fi name among your modular mesh system. Safe Access provides easy-to-use parental management while keeping away any malicious intrusions. Synology MR2200ac is backed by Synology's 2-year limited warranty.

4.6 out of 5 stars
4.6 out of 5
225 global ratings
How are ratings calculated?
To calculate the overall star rating and percentage breakdown by star, we don’t use a simple average. Instead, our system considers things like how recent a review is and if the reviewer bought the item on Amazon. It also analyses reviews to verify trustworthiness.

punter
3.0 out of 5 stars Great router with all the usual Synology benefits, but LIMITED MESH AVAILABILITY.
Reviewed in the United Kingdom on 26 November 2019
Verified Purchase
An excellent wifi router, with the added bonus of the familiar Synology approach to device management and support. That includes comprehensive and easy-to-use configuration software, and the backing of a responsive, well-organised, well-informed and helpful support operation - an example that some of Synology's competitors would do well to follow!

However, if you are considering, as I did, buying these devices to create a mesh network behind some other existing router (ie, you wish to run in these Synology units in Access Point mode), then THINK AGAIN:-

THE MR2200ac WILL NOT CREATE A MESH NETWORK WHEN OPERATING IN ACCESS POINT MODE.

I will return to this later.

The first thing you will notice when commissioning these units is that they are painfully slow to boot, and it typically takes several minutes from power-on to full operation. If you have multiple units, the initial process of pairing them is simply agonising. Pairing cannot begin until both units have reached an operating state - say 10 minutes from cold boot. The the main unit must then "find" its subsidiary unit, and then send it configuration information, all over wifi. This again takes a considerable time, during which the internet connection is unavailable, and the less patient user is likely to have given up long before the process is complete. I don't doubt that this is Synology being thorough, but I can't help feeling that much time might be saved if initial pairing could be completed using a wired connection between the units. However, the pairing process explicitly requires wifi connection only - wired connection can only be made once pairing has been completed, which strikes me as silly, as well as wildly unintuitive even if it is common practice.

I have already mentioned mesh networking. Remember that this device is advertised and sold as a mesh router, which to me seems to be only partly true. The main point of a mesh network is that on can have multiple router/access-points working together to provide seamless wifi coverage over an area that could not be covered by a single unit. The benefit of this to the user is that one can move around anywhere within the covered area, connecting invisibly and without interruption of communication to the unit providing the best signal at that particular moment. Switching between units should be instantaneous.

After I had installed my Synology units in addition to (and not as a replacement for) my existing DrayTek router, I found that there could be a hiatus in communications of several seconds, occasionally tens of seconds, in switching between units. It was only when I eventually queried this with the Synology support department I was told that mesh communications is only available when the master unit is operating in full router mode, otherwise it is explicitly disabled! I remain more than a little annoyed about this, as I found no indication of it before purchase, and nor does it seem a remotely reasonable limitation on so pricey a piece of kit. I am an enthusiastic user of other Synology NAS devices, and so I had no qualms in purchasing these devices. However, had I known of the mesh limitations I would most certainly not have done so.

Andy L
5.0 out of 5 stars Parental controls just fantastic
Reviewed in the United Kingdom on 23 June 2019
Verified Purchase
I purchased this to limit internet time to the young people in the house. It took me a while to set up, but this is mainly as I have a fairly complicated setup at home. Virgin media - Ubiquity Edge Router - Ubiquity switches running separate VLANs and Ubiquity AP Pros.
I didn't want the WiFi from Synology, I only wanted it for the parental controls. When I finally got it hooked up between the Media hub and the Edgerouter it worked a treat. The fact that you can set on / off times for the internet for groups of devices, and limit the total internet time per day is just fantastic.
Yes - savvy kids could turn off WiFi on their phones and resort to a mobile data signal but we limit the Gb's per month on those so they run out very quickly.

I did have a speed issue to start with. I disabled traffic control (used to give priority bandwidth to devices that you choose) and since then it can manage 350Mbs connection I have just fine.

Glasgood
5.0 out of 5 stars Fantastic Mesh Router
Reviewed in the United Kingdom on 2 June 2020
Verified Purchase
I have both Synology MR2200ac and rt2600 setup as a mesh. Fantastic range on both, love the Synology Router Manager, ease of use, as I can create user profiles and assign various internet access controls for family members and each device in the house. One of the most useful features is the ability to easily block ad's in Safari or Google Chrome, it is very very good at blocking ad's!. It does not block ad's in YouTube site, but by installing the chrome plugin AdBlock you can set AdBlock to only Block YouTube ad's . Then allow AdBlock to show all other ad's, all other ad's allowed by AdBlock will be Blocked by Synology Router Manager. Setting up ad blocking this way will stop websites detecting AdBlock and blocking website access unless you disable AdBlock. Websites will not detect Synology Manager built in ad blocking.
Read more

Bill C
4.0 out of 5 stars Great WiFi Extender by supplied with an EU plug instead of a UK version
Reviewed in the United Kingdom on 16 March 2019
Verified Purchase
This router has been used to extend the WiFi network from my Synology RT2600. Set-up was extremely simple as the RT2600 just automatically detects and configures the extender. There is no need to plug in a network cable when used as an extender. This device has generally boosted the WiFi around my home so I no longer have any dead spots. It is also very easy to move the device to another location around your house without any reconfiguration. The BIG complaint that I have is that the power supply comes with a EU type plug instead of a UK type. This is not acceptable considering how much it costs. Using a plug adapter makes the power supply hang-out a long way from the wall socket.
Read more
One person found this helpful
Report abuse

Lord
4.0 out of 5 stars Great reliable Wi-fi
Reviewed in the United Kingdom on 4 September 2019
Verified Purchase
Generally great as a Wi-fi mesh with a synology ac2600 it’s extended my Wi-fi very reliably. Only negative is there are wireless issues if using Ethernet backbone for the mesh. certain devices would connect but have no internet access. The pace of updates has slowed down markedly recently so bugs can take a while to get resolved. Still the best Wi-fi combination I’ve ever had though to put that in Perspective
Read more
Report abuse
See all reviews
Pages with related products. See and discover other items: Best Rated in Routers
Get FREE delivery with Amazon Prime
Prime members enjoy FREE Delivery and exclusive access to movies, TV shows, music, Kindle e-books, Twitch Prime, and more.
> Get Started
Back to top
Get to Know Us
Make Money with Us
Let Us Help You
And don't forget:
© 1996-2020, Amazon.com, Inc. or its affiliates