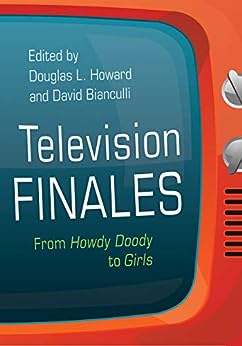 Finales are in many cases the high points of iconic television series. This carefully compiled and well-researched compendium provides a definitive explication and assessment of finales through the half century and counting of television, and will become a classic text in the field.--Paul Levinson, professor of communication and media studies, Fordham University

This book is about much more than television finales; it shows us how the final episode illuminates the entire series. David Bianculli's work is historically informed, showing his mastery of the subject. With contributors representing some of the leading lights in television studies and impressive contributions by new scholars as well, the approximately seventy essays span the scope of television.--Rhonda V. Wilcox, author of Reading Joss Whedon

An invaluable resource for those studying or researching popular culture. . . .Highly recommended--Choice --This text refers to the paperback edition.

Douglas L. Howard is academic chair of the English Department on the Ammerman Campus at Suffolk County Community College. He is the editor of Dexter: Investigating Cutting Edge Television and a coeditor of The Essential Sopranos Reader.

David Bianculli has been a TV critic since 1975, currently runs the website TVWorthWatching.com, and serves as guest host for NPR's Fresh Air. He is the author of The Platinum Age of Television: From I Love Lucy to The Walking Dead, How TV Became Terrific. --This text refers to the paperback edition.

4.5 out of 5 stars
4.5 out of 5
4 global ratings
How are ratings calculated?
To calculate the overall star rating and percentage breakdown by star, we don’t use a simple average. Instead, our system considers things like how recent a review is and if the reviewer bought the item on Amazon. It also analyses reviews to verify trustworthiness.

Lee Goldberg
4.0 out of 5 stars It's About Time We Had a Book about TV FInales
Reviewed in the United States on 24 November 2018
Verified Purchase
A book about televsion finales is long-overdue and I was eager to read this one. This 500-page opus is more of a series of critical analyses than a reference work, with experts like TV critic David Bianculli, TV reference book author Douglas Snauffer, and TV historian Robert J. Thompson offering their insights in essays that cover 71 finales, including such classic and controversial endings as Newhart, Seinfeld, Lost, The Sopranos, St. Elsewhere, M*A*S*H and Nichols. They also cover obscure, short-lived shows like Jericho and British series like Life on Mars and Spaced. The reasoning behind which finales were chosen to include in the book isn't clear, so we don't know why the enders for shows like Magnum PI, Jag, Miami Vice, The Paper Chase, CSI, Who's the Boss and The Odd Couple were overlooked, while space was given to lesser-known series like Rectify and Carnivale.

The essays are interesting and, in most cases, thoughtful and well-considered, with the finales put into both historical/cultural context as well as within the context of the narrative of the often long-running shows themselves. But basically most of the entries are scholarly opinion pieces, the authors explaining why they think a particular finale was memorable or forgettable, good or bad (for example, Martha P. Nochimson hated the finale of Battlestar Galactica, faulting series creator/writer Ronald Moore for driving "the show where it could not and should not go" and frakking-up the finale)  I didn't always agree with the authors' conclusions (personally, I thought the Galactica finale was great), but that didn't lessen my enjoyment of the book. I wish, though, that the book focused far less on the opinions and analyses of the authors and more on the actual development and production of the finales, with interviews with the writers, directors, and cast members.
Read more
12 people found this helpful
Report abuse
See all reviews
Back to top
Get to Know Us
Make Money with Us
Let Us Help You
And don't forget:
© 1996-2021, Amazon.com, Inc. or its affiliates