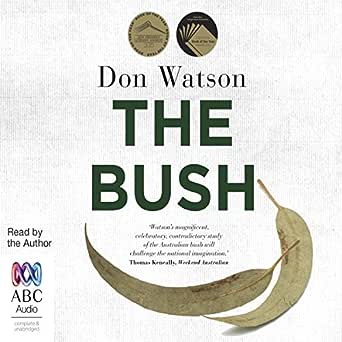 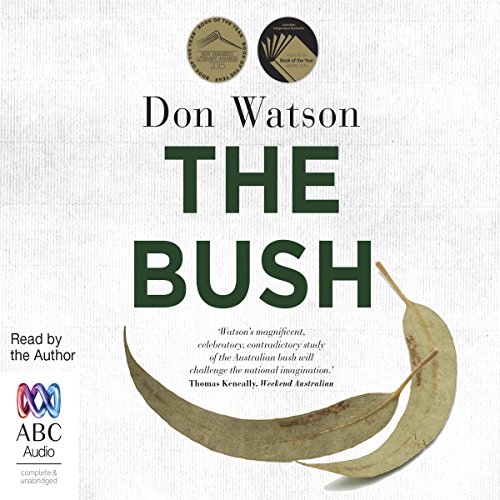 4.5 out of 5 stars
4.5 out of 5
42 global ratings
How are ratings calculated?
To calculate the overall star rating and percentage breakdown by star, we don’t use a simple average. Instead, our system considers things like how recent a review is and if the reviewer bought the item on Amazon. It also analyses reviews to verify trustworthiness.

John Davies (Dr)
5.0 out of 5 stars The Bush, you are standing in it!
Reviewed in Australia on 24 November 2020
Verified Purchase
Besides Laseron, Face of Australia, very few books encourage the reader to develop an insight into Australia. The book goes beyond being a document detailing history and geography to offering reasons that generate an understanding of present day Australia. It is also a vertical book, you don't need to start at the beginning like a novel but can be dipped into at any point.
Highly recommended for tourists, travellers and long term residents. Beautifully written as one would expect from a speech writer!

siggy
5.0 out of 5 stars Myths debunked
Reviewed in Australia on 25 April 2019
Verified Purchase
A must read for migrants to Australia, of which I am one. It provides insight into the often perplexing attitudes displayed by the descendants of the first invaders and early immigrants. It also builds appreciation for the diversity of Australian flora which, on superficial observation (particularly by Europeans) can look monotonous. And Don Watson achieves it all in an engaging, story telling way. Thank you Don!
Read more
Helpful
Comment Report abuse

Amazon Customer
4.0 out of 5 stars The Bush
Reviewed in Australia on 3 December 2015
Verified Purchase
In my opinion, Don Watson joins Tench and Wentworth, Lawson and Clark , Franklin and Gunn and more recently Keneally, Hughes and Grenville as writers who have told of our past in such a raw and revealing way.

This is a remarkable read, informative, confronting, amusing in parts. It reminds us all of what most of us already know, but in a manner that spikes our conscience and strips away the myth.

As a 6th generation Settler, where the previous 5 generations were of the Bush, I was fortunate to have benefitted from first hand recollections of family history - an appreciation of the rigours of life in the bush - from Sydney Cove to the wilds of the Hawkesbury, the Murrumbidgee and the ancient forests of northern NSW - every step a hard yard, the floods and fires, infant mortality, the grog and domestic violence, the endemic and mostly acceptable crime, the social divisions between free and fettled settlers and the disdain for the city toffs. My father often spoke, like Watson, of the loneliness and sullenness of the bush, enough to make you want to jump off a high cliff, he told me. Watson absolutely nails the narrative by drawing on the experiences and writings of so many.

Such revelations-too! Not the least that the Aussie blow fly, the infamous dunny budgie, is not a true Australian, but another of our bulging feral population - and that Dingos and blue Northumberland made the blue cattle dog.

Quotes there are many - but for me, this one is special - "Our happiness, in the main, we owed to our cows. A good jersey looks a bit like Audrey Hepburn.
The other that rings true is Joseph Furphy observations in Such is Life - ‘it is easier to acquire gentlemanly deportment than an axe- man’s muscles; easier to criticise an opera than to identify a beast seen casually twelve months before; easier to dress becomingly than to make a bee- line, straight as the sighting of a theodolite, across strange country in foggy weather; easier to recognise the various costly vintages than to live contentedly on the smell of an oily rag".
This politely describes the massive gap between the bush and town tribes, so to speak and to a large extent it's still very relevant.

Finally, I have always been incensed by the vicious destruction of the Gonwana ecology by the first and subsequent settlers, to the degradation of our rivers, forests and fauna and the genocide and unnecessary murder of entires tribes of aborigines. My Irishness caused me to blame the British for being so greedy, vicious, short-sighted and in fact stupid, but Watson had helped me to understand that the blame lies with us all. He points out that time changes perspectives. The Aborigines and early settlers in Gippsland lived in a garden of Eden-like place, with ancient tall timbers, wild grass 2 metres high, clear steams and rivers teeming with fish, valleys of ancient ferns and trees and within a couple of decades, the ringbarkers and loggers had completely destroyed this paradise, wrenching it's marvels from us and our children. Yet today we drive the Grand Ridge Road and marvel at the beauty of the topography, the lush greenery and the fat livestock. Watson suggests that both nature and the modern observer have adjusted to the new reality, so much so that the old has become irrelevant.

What angers me still is that we still persist in converting old growth to toilet paper but I feel we are edging closer to the inevitable conclusion that enough damage has been done.

Christy
4.0 out of 5 stars Four Stars
Reviewed in Australia on 21 July 2015
Verified Purchase
Heavy going but thoroughly informative . Well worth the read especially for those not born in Australia.
Read more
Helpful
Comment Report abuse

Joyce
2.0 out of 5 stars Tediously interesting
Reviewed in Australia on 25 May 2015
Verified Purchase
Couldn't stick it long enough to finish. Too much like reading a history text. Pity because the topic is interesting
Read more
One person found this helpful
Helpful
Comment Report abuse

Jan cameron
5.0 out of 5 stars Five Stars
Reviewed in Australia on 9 November 2014
Verified Purchase
I enjoyed reading the facts, particularly about the food storage hut. A book I will come back to
Read more
Helpful
Comment Report abuse

glenys gray
5.0 out of 5 stars a must read. should be in the school curriculum.
Reviewed in Australia on 1 April 2015
Verified Purchase
Well written and amazingly well researched.
Read more
Helpful
Comment Report abuse
See all reviews

Chris Bell
5.0 out of 5 stars Challenge yourself about our sentimental Bush Myths.
Reviewed in the United States on 21 August 2015
Verified Purchase
Well written, hugely knowledgeable and well informed, comprehensive story of The Bush in myth, fiction and fact. Daunting in its comprehensive sweep of the effects of ('modern") man on the continent. No hint of rant, or cant, but replete with challenging information on our effect on this island's natural world.
Honest to the core, but will not be well received in some quarters. Refuses to be drawn into the stale and cliched waters of the "black armband" debate about our history.

Same or similar stories could be told about all of Europe, I expect, except that it all or mostly happened there in pre recorded history eras.
Read more
One person found this helpful
Report abuse

rogerdawkins
5.0 out of 5 stars Australian adaptation
Reviewed in the United States on 14 January 2017
Verified Purchase
Enjoyed the synthesis of bush folklore, botanical science and Australian history. Watson encourages us to feel guilt for the actions of our colonial families but to respect their fortitude and adaptation to a hostile world. It is humbling to appreciate just how much the the immigrants had to learn and how quickly the diverse collection of discards created a shared knowledge based largely on oral history. Partly also by reading the changes in the flora and fauna. Remarkable also how some, perhaps many, indigenous individuals adapted. There can be some pride to temper the guilt.
Read more
Report abuse

Shirley Knuckey
5.0 out of 5 stars An absolute treasure
Reviewed in the United States on 9 June 2015
Verified Purchase
I started this book as we were shortly to take an inland tour through Australia's heartland. I was totally gobsmacked by the knowledge across multiple aspects of the writer. He seemed to have an infinite understanding of not only detailed history, but botany, zoology, psychology, social anthropology, politics let alone huge amounts of geography of Australia. The detail is phenomenal, and as it is in memoir-mode his own recollections enliven the narrative. One thing I missed though, was a selection of maps and diagrams. A reader can feel s/he might have virtually no idea of the locality under inspection. I tried Google maps and didn't fare much better. Photos were good but could have been more fully captioned. Our Ghan trip from Adelaide to Darwin though not the immediate focus of the book, was rendered much more insightfully enjoyable because we had read this book. I had The Bush with me through our holiday and kept on dipping into it. Incidentally - it is a dip-into book - open any page and pick up interesting paragraphs straight away. Thoroughly recommendable by all who have got past the Brizzie to Melbers perception that that's all Australia is!
Read more
One person found this helpful
Report abuse

Bopam in Phoenix
5.0 out of 5 stars Good Friends
Reviewed in the United States on 12 July 2019
Verified Purchase
The book was a gift to two very special friends who left for Australia. It turned out that it was a book that they had been wanting to read. End of story.
Read more
Report abuse

DougJ
5.0 out of 5 stars Read this, Australians, and know yourself and your country a lot better.
Reviewed in the United States on 21 February 2015
Verified Purchase
I can't remember the last time I read non-fiction that I found so difficult to put down, aided by Watson's considerable literary gifts and sardonic wit. More importantly (and I know how pompous this is going to sound but I don't care) you will not understand yourself as an Australian until you have read this book and for those in other countries, you will not understand Australians until you have read this book. (I'd venture to suggest that Americans and Canadians will find much that they recognise in their own history and culture.) Doesn't matter if you loathe, love or ignore 'the bush', this has to be on your must-read list.
Read more
One person found this helpful
Report abuse
See all reviews
Get FREE delivery with Amazon Prime
Prime members enjoy FREE Delivery and exclusive access to movies, TV shows, music, Kindle e-books, Twitch Prime, and more.
> Get Started
Back to top
Get to Know Us
Make Money with Us
Let Us Help You
And don't forget:
© 1996-2020, Amazon.com, Inc. or its affiliates