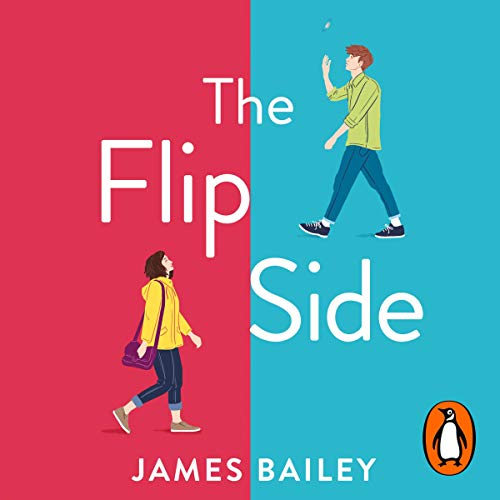 Dive in to the feel-good rom-com of the year.

Josh has done everything right. It's New Year's Eve, and he and girlfriend, Jade, have their own pod on the London Eye. He's got the champagne and the truffles. The ring and the romance. And he's just popped the question.

Unfortunately, he gets it wrong.

So horribly wrong that by the time he's back on ground he's single, jobless and homeless. Realising he can't trust his own judgement, Josh decides to put his faith in fate. From now on every choice will be decided by the flip of a coin. It's reckless, scary, liberating and insanely wrong. But Josh has tried the right way and look where he ended up.

And maybe the girl of his dreams really is one flip of a coin away?

Switch between reading the Kindle book & listening to the Audible narration with Whispersync for Voice.
Get the Audible audiobook for the reduced price of $9.99 after you buy the Kindle book.
Learn more about membership
By completing your purchase, you agree to Audible’s Conditions Of Use and Privacy Notice.
Sold and delivered by Audible, an Amazon company

3.9 out of 5 stars
3.9 out of 5
1,202 global ratings
How are ratings calculated?
To calculate the overall star rating and percentage breakdown by star, we don’t use a simple average. Instead, our system considers things like how recent a review is and if the reviewer bought the item on Amazon. It also analyses reviews to verify trustworthiness.

There are 0 reviews and 35 ratings from Australia

Caitlin
5.0 out of 5 stars Brilliant, funny, relatable and not predictable at all
Reviewed in the United Kingdom on 22 August 2020
Verified Purchase
I devoured this book so fast! I haven’t read any romantic comedy novels written from a male perspective and it was really refreshing. I loved every part of the plot, the dialogue and the characters and never felt like I knew what was what coming next or how it would develop. I loved the humour and natural asides throughout the book and the main character is really relatable. It was uplifting, funny, honest and a tiny bit escapist. I loved reading the descriptions of London and Bristol and Munich and Paris etc. I hope it becomes a film!
Read more
6 people found this helpful
Report abuse

Nicola Mcfarlane
5.0 out of 5 stars Fantastic Book
Reviewed in the United Kingdom on 30 August 2020
Verified Purchase
I can't say enough about how fantastic this book was, I can completely see it as a rom-com film in time. I loved the characters and the settings, the author has perfectly captured the highs and lows of dating and really just being alive etc... in the modern world and I did struggle to put it down. The descriptions of the characters and locations are that detailed and on point that either I feel as though I'm there, or the characters enthusiasm and excitement becomes my own...I'm not a big art person for example but this book has made me want to be so that I can go and see a certain famous painting described throughout the book. A lot of research and heart has gone into this, the author should be very proud, I definitely can't wait to hear of more books from him.
Read more
4 people found this helpful
Report abuse

T. Bailey
5.0 out of 5 stars I laughed out loud.
Reviewed in the United Kingdom on 20 August 2020
Verified Purchase
I really enjoyed this book. Romantic comedies aren’t normally amongst my pick of books, but this one was so full of humour and laugh out loud incidents, I was pleasantly surprised. I particularly liked how most of the chapters had a wry or surprising ending, making me want to read one more chapter before I put it down.

I loved the detailed descriptions of the various city locations that Josh lives in and travels to, and these changes of location added to the pace of the story and my desire to find out if Josh's coin would turn his year from a disaster to a success. All in all, a great read.
Read more
4 people found this helpful
Report abuse

Maggie
5.0 out of 5 stars A Really Funny Book
Reviewed in the United Kingdom on 12 April 2021
Verified Purchase
I chose this book as it sounded rather different from the ones I usually read with the lead character travelling to several cities for a specific reason (no spoilers) and, whilst not being able to travel anywhere because of Covid, I thought it would be a sort of 'armchair travelling'.
It had me gripped and laughing straight away. It is the funniest laugh out loud book I've read. Not really being a fan of this kind of book I surprised myself just how much I enjoyed it.
Basically, Josh, our hero, is a really lovely guy. Just a wee bit undecided in what he wants to do with his life. The way he deals with all decision making for a year is the basis of the story. I have never laughed so much whilst reading a book. This is, I believe, James Bailey's first book. Well I just hope he writes lots more. He really has a distinctive style of writing. Look forward to reading more by him.
Read more
3 people found this helpful
Report abuse

AnneMPB
5.0 out of 5 stars Well recommended romcom
Reviewed in the United Kingdom on 21 August 2020
Verified Purchase
Really enjoyed this romcom refreshingly written from a male standpoint. Good storyline, well paced with enough twists to keep you guessing. Satisfyingly romantic but also very funny. It’s rare for me to laugh out loud so much reading a novel. I loved the little descriptive details that you can identify with which really brought the book to life. This is an engaging book, an excellent summer read (or indeed winter too!). More from this author please!
Read more
6 people found this helpful
Report abuse
See all reviews