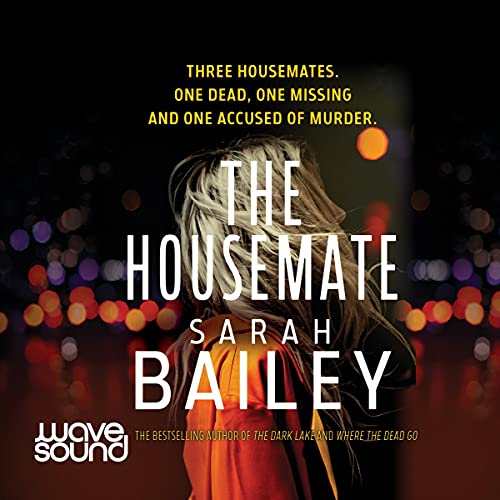 Dubbed the Housemate Homicide, it's a mystery that has baffled Australians for almost a decade. Melbourne-based journalist Olive Groves worked on the story as a junior reporter and became obsessed by the case. Now, nine years later, the missing housemate turns up dead on a remote property. Olive is once again assigned to the story; this time reluctantly paired with precocious millennial podcaster Cooper Ng. As Oli and Cooper unearth new facts about the three housemates, a dark web of secrets is uncovered. The revelations catapult Oli back to the death of the first housemate, forcing her to confront past traumas and insecurities that have risen to the surface again.

What really happened between the three housemates that night? Will Oli's relentless search for the murderer put her new family in danger? And could her suspicion that the truth lies closer to home threaten her happiness and even her sanity?

A riveting, provocative thriller from the best-selling author of The Dark Lake, Into the Night and Where the Dead Go.

Switch between reading the Kindle book & listening to the Audible narration with Whispersync for Voice.
Get the Audible audiobook for the reduced price of $3.47 after you buy the Kindle book.
Learn more about membership
By completing your purchase, you agree to Audible’s Conditions Of Use and Privacy Notice.
Sold and delivered by Audible, an Amazon company
Share

4.2 out of 5 stars
4.2 out of 5
314 global ratings
How are ratings calculated?
To calculate the overall star rating and percentage breakdown by star, we don’t use a simple average. Instead, our system considers things like how recent a review is and if the reviewer bought the item on Amazon. It also analyses reviews to verify trustworthiness.

Snapdragon
TOP 50 REVIEWER
4.0 out of 5 stars Tale of a crusading Melbourne journo
Reviewed in Australia on 2 December 2021
Verified Purchase
I’ve just read three Australian crime novels in quick succession and this was by far the best. It was also the longest. It concerns Oli Grove, a journalist in her late thirties who 10 years previously covered the murder of a university housemate. One housemate disappeared. The third was charged and did jail time, but there’s always been a question about her guilt. Ten years later, the case comes to public notice again as new developments come to light. Oli is asked (told) to work with Cooper Ng, a chatty tech whizz kid who at first tries her patience, and who comes up with the idea of making a true crime podcast - this being the digital era when traditional print news is dying. The novel flips back and forth between the two time periods and we learn that Oli had a tempestuous affair with a married man - a high flyer - who was married to a detective on the original case. That woman was later killed and Oli is now his fiancée and uncomfortable stepmother to his twin girls. The case ends up being bigger than Ben Hur against a backdrop of extreme corruption from the former Victorian premier.

Regardless of the believability of the plot, Bailey does an extremely good job of showing us how journalists work. It says something about our political cynicism that stories of extreme corruption at high levels have us barely turning a hair. Personally, I think the book would have worked just as well if it hadn’t been so extensive. The interplay between police and media is also well done. Where Bailey shines in comparison with other authors is in her creation of complex characters: there’s no problem believing in them as real people. Oli’s fiancé, for example, comes across as showing a few signs of incipient abusiveness. There is a big denouement, which would play well were this a movie. There’s only one point where I thought Oli’s deductions were a forced plot linkage. All In all, Bailey is clearly one of our better thriller writers and in this long book there’s plenty to get your teeth into.
Read more
Helpful
Report abuse

VikkiP
5.0 out of 5 stars What a page turner!
Reviewed in Australia on 4 January 2022
Verified Purchase
Sarah Bailey is master of the art of creating suspense. She takes the reader into the frenetic world of journalism where journalist Oli Groves is determined to solve the mystery of the Housemate Murder from a decade earlier. Oli is juggling a relationship that she thought was perfect as she faces the changing nature of her job. I read is book in a couple of sittings. Loved it.
Read more
Helpful
Report abuse

Bob Howe
5.0 out of 5 stars Review of The Housemates
Reviewed in Australia on 12 September 2021
Verified Purchase
Very tricky twists and turns but because you got to know the primary people it flowed excellently. Very hard to stop reading as you got to the last 25% as it was intriguing and compelling.
Well worth a read
Read more
One person found this helpful
Helpful
Report abuse

Margie Johansson
5.0 out of 5 stars Interesting and twists and turns!
Reviewed in Australia on 8 November 2021
Verified Purchase
Loved your novel, brilliantly written with a lot of twists and turns, leaving me gob-smacked at the end. Well done Sarah Bailey. Great read.
Read more
Helpful
Report abuse

Kate
5.0 out of 5 stars Gripping until the end
Reviewed in Australia on 4 January 2022
Verified Purchase
Sensational read! So many twists and turns. It’s a real page turner and doesn’t give it away until the very end. Highly recommend
Read more
Helpful
Report abuse

The Housemate is told from the point of view of Olive Groves, an investigative journalist in Melbourne. 9 years ago she worked on The Housemates Homicide as it was dubbed by the papers. 3 women sharing a house in St Kilda - one murdered, one missing. Now, almost a decade later, the missing housemate is found dead on a property in rural Victoria. Olive has been obsessed with the case this whole time and now she gets the chance to write about it again. Her paper throws her together with Cooper Ng, who is working on a podcast on the case, something she is not happy about but they make a great team.

I loved the character of Copper. He is was funny and smart and liked to wind Oli up. He is the future of news reporting and Oli just wants to stick with print media. Their relationship was really enjoyable. As they dig deeper, all is not as it first seemed and things get dangerous for all concerned.

It is hard to express just how great this story is. There is alot that I can't say without spoiling it so you are just going to have to get yourself a copy of The Housemate on August 31st to read for yourself. And while you are at it, grab the Gemma Woodstock series if you haven't already. I promise that you will not be disappointed.
Read more
One person found this helpful
Helpful
Report abuse

Debbie @storiesandstacks
TOP 1000 REVIEWER
5.0 out of 5 stars Sensational! One of my absolute favourite authors is back and this is one you do not want to miss.
Reviewed in Australia on 31 August 2021
Three housemates. One dead, one missing and one accused of murder.

An almost decade-long mystery that baffled Australian's, dubbed the Housemate Homicide, is coming back into the headlines. Journalist Olive Groves (Oli) worked on the story as a junior reporter and when the case returns she is on the scene ready. The missing housemate has turned up dead on a remote property, nine years later and Oli is assigned to the story along with millennial podcaster Cooper Ng. As the pair work together they uncover new facts in the case, while Oli also deals with her past traumas. But as they get closer, will this threaten Oli's new family?

This was one that drew me in right from the beginning and I could not put it down. The characters and their past was so intriguing, along with the new beginning for Oli. I loved the mystery that Oli finds herself entwined in, along with Cooper Ng, with the pair having some playful jesting throughout. Bailey is a master at building suspense and while I thought I had some of the mystery figured out, I was wrong. There was so much I loved about this one but I can't reveal the details, save for spoilers. Definitely one I recommend and another sensational novel by the author

Thank you so much to the author & Allen & Unwin for my advance review copy.
Read more
Helpful
Report abuse
See all reviews
Back to top
Get to Know Us
Make Money with Us
Let Us Help You
And don't forget:
© 1996-2022, Amazon.com, Inc. or its affiliates