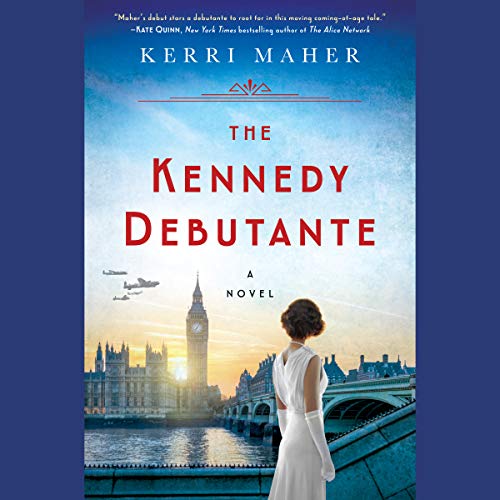 "A riveting reimagining of a true tale of forbidden love." (People)

A captivating novel following the exploits of Kathleen "Kick" Kennedy, the forgotten and rebellious daughter of one of America's greatest political dynasties.

London, 1938. The effervescent "It girl" of London society since her father was named the ambassador, Kathleen "Kick" Kennedy moves in rarified circles, rubbing satin-covered elbows with some of the 20th century's most powerful figures. Eager to escape the watchful eye of her strict mother, Rose; the antics of her older brothers, Jack and Joe; and the erratic behavior of her sister Rosemary, Kick is ready to strike out on her own and is soon swept off her feet by Billy Hartington, the future Duke of Devonshire.

But their love is forbidden, as Kick's devout Catholic family and Billy's staunchly Protestant one would never approve their match. And when war breaks like a tidal wave across her world, Billy is ripped from her arms as the Kennedys are forced to return to the States. Kick finds work as a journalist and joins the Red Cross to get back to England, where she will have to decide where her true loyalties lie - with family or with love....

Switch between reading the Kindle book & listening to the Audible narration with Whispersync for Voice.
Get the Audible audiobook for the reduced price of $3.49 after you buy the Kindle book.
Learn more about membership
By completing your purchase, you agree to Audible’s Conditions Of Use and Privacy Notice.
Sold and delivered by Audible, an Amazon company

4.4 out of 5 stars
4.4 out of 5
658 global ratings
How are ratings calculated?
To calculate the overall star rating and percentage breakdown by star, we don’t use a simple average. Instead, our system considers things like how recent a review is and if the reviewer bought the item on Amazon. It also analyses reviews to verify trustworthiness.

There are 0 reviews and 7 ratings from Australia

Lucy-Bookworm
4.0 out of 5 stars Excellent novel-based-on-fact, revolving around the life of a little known person, Kathleen Kennedy
Reviewed in the United Kingdom on 15 March 2021
Verified Purchase
Kathleen "Kick" Kennedy was the sister of John F Kennedy, and part of the illustrious Kennedy clan. Everyone has heard of JFK, and his brother Ted Kennedy, but little is known of Kick.

When her father was made the US Ambassador to the United Kingdom in 1938, the family moved to London & 18 yr old Kick quickly fell in love with London, and with England (people & country). She was presented at Court alongside young women who remained friends for life, including Deborah Mitford (later Duchess of Devonshire, but also Kathleen’s sister-in-law & lifelong friend).

In the summer of 1938, Kick met Billy Cavendish & they soon became inseparable. Kick was attracted by Billy’s handsome looks, his caring, compassionate nature & very “English” mannerisms. Billy was attracted to Kick’s energy & independence – she was one of the few women who weren’t attracted to his wealth/status (he was considered the most eligible man in England!). She came from a wealthy family & neither understood or desired to become a member of the English aristocracy. Unfortunately both families were unhappy with the relationship as Kick was steadfastly Catholic & Billy was not only Protestant but from one of the most anti-Catholic families in England!
Kick moved back to America during the early days of WW2 and threw herself into journalism as she tried to forget Billy, but soon realised that her heart was not only with him but firmly in England. She then focussed her attention on how she could return to England, which was unfortunately being ravaged by the war. She eventually managed to return as a Red Cross volunteer, and renewed both her friendships and the relationship with Billy.

It’s hard for the modern reader to understand the proprieties of the day, and the difficulties that a Catholic-Protestant relationship would have caused at the time. Neither felt able to compromise and Kick’s parents made it clear that they would not support the marriage. Billy’s mother was much more supportive and tried to help, but ultimately Kick defied her Catholic parents to marry Billy - the compromise was that they married in a civil ceremony at a Register Office, rather than a grand society church wedding.

Kick & Billy had only been married for 4 months, and had spent just 5 weeks together as husband & wife when Billy was killed in action in WW2. How different things could have been if they had been able to marry in 1941 when Kick’s friend Deborah Mitford married Billy’s brother Andrew. There is no doubt that Chatsworth thrived under the control of Deborah (she became Duchess of Devonshire – her husband became the heir to the dukedom after his elder brother’s death) but I can’t help wondering how Kick, or any children they may have had, might have changed Chatsworth.

I enjoyed this book, and was pleased to find an easy read that was built on solid historical research/fact. It got a bit drawn out in the middle, but this mirrored Kick & Billy’s relationship that also was drawn out for many years as they battled “the religion problem”. The author notes at the end just add to the authenticity for me.

RosemarieMenassas
2.0 out of 5 stars Historical Fiction
Reviewed in Canada on 11 June 2020
Verified Purchase
As the title suggests, this is largely a work of fiction loosely based on historical facts that jibe with a fanciful tale of imagined conversation by the author. I highly doubt Kick Kennedy was a virgin when she married Billy Hartington. She had those Kennedy genes after all and so this part of the book remains highly suspect to me. anyone can write a book like this looking at historical facts and weaving an imaginary tale. Sorry I wasted my time reading it to the end!
Read more
Report abuse

MANNI
5.0 out of 5 stars Most capturing!
Reviewed in Japan on 25 September 2021
Verified Purchase
Will definitely be reading more from this author.
Read more
Report abuse

Susan
5.0 out of 5 stars Historical fiction at its best
Reviewed in the United States on 25 October 2018
Verified Purchase
Kick Kennedy, whose short life is a mere footnote in the many books I have read about the family, finally has her story told in this immensely readable debut novel by Kerri Maher. I was transported back in time to the days of high society England, beginning with Kick’s presentation to Queen Elizabeth and ending in tragedy that seems to follow the Kennedys.

Evenings at the 400 with young women named Debo and Sissy, with Kick and their aristocratic young men, are so vividly described that I could almost feel the tickle of Champagne bubbles. Is it any wonder that she falls head over heels in love with Billy Hartington, one of England’s most eligible bachelors, after spending so much time with him at nightclubs and house parties? As World War II begins, the men enlist, but the parties continue. Despite the Blitz and hardships, Kick adopts England as her home and the Hartingtons as her family.

Barely an adult, Kick Kennedy faces the biggest decision in her life. The Kennedys are famously devout Roman Catholics; the Hartingtons are equally devoted members of the Church of England. Until relatively recently, the Pope decreed that Catholics will be excommunicated if they did not marry in the Church; there were no exceptions, even for the powerful Kennedys. Will Kick risk losing her family to marry the love of her life?

It is difficult to imagine in this day that an interfaith marriage could have such disastrous consequences, but until the Catholic Church relaxed its rules, marrying outside the faith was an all-or-nothing proposition. In some accounts of Kick’s life, Rose Kennedy disowned her own daughter after she married Billy. At best, Rose is frosty. Kerri Maher accurately describes the internal dilemma Kick faces, and I could almost feel her pain as she struggled.

What a well researched, beautifully written story of the forgotten Kennedy girl and the time of her life. As an Anglophile, I love a peek into that period of English history. Kerri Maher, you gave me a gem!
Read more
38 people found this helpful
Report abuse
See all reviews