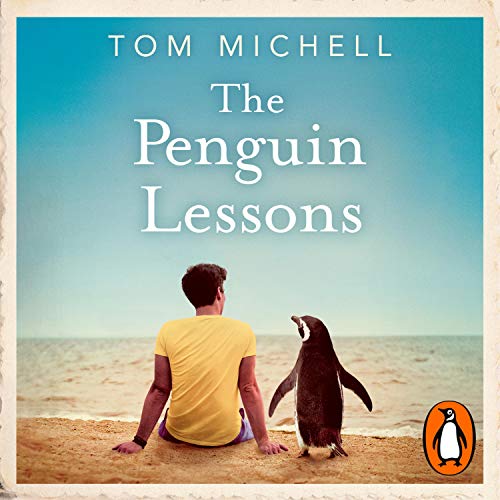 'I was hoping against hope that the penguin would survive because as of that instant he had a name, and with his name came the beginning of a bond which would last a life-time.'

Tom Michell is in his roaring 20's: single, free-spirited and seeking adventure. He has a plane ticket to South America, a teaching position in a prestigious Argentine boarding school, and endless summer holidays. He even has a motorbike, Che Guevara style. What he doesn't need is a pet. What he really doesn't need is a pet penguin. <\p>

Set against Argentina's turbulent years following the collapse of the corrupt Perónist regime, this is the heart warming story of Juan Salvador the penguin, rescued by Tom from an oil slick in Uruguay just days before a new term. When the bird refuses to leave Tom's side, the young teacher has no choice but to smuggle it across the border, through customs, and back to school. Whether it's as the rugby team's mascot, the housekeeper's confidant, the host at Tom's parties or the most flamboyant swimming coach in world history, Juan Salvador transforms the lives of all he meets - in particular one homesick school boy. And as for Tom, he discovers in Juan Salvador a compadre like no other....

The Penguin Lessons is a unique and moving true story which has captured imaginations around the globe - for all those who dreamed as a child they might one day talk to the animals.

Switch between reading the Kindle book & listening to the Audible narration with Whispersync for Voice.
Get the Audible audiobook for the reduced price of $12.49 after you buy the Kindle book.
Learn more about membership
By completing your purchase, you agree to Audible’s Conditions Of Use and Privacy Notice.
Sold and delivered by Audible, an Amazon company

4.6 out of 5 stars
4.6 out of 5
2,095 global ratings
How are ratings calculated?
To calculate the overall star rating and percentage breakdown by star, we don’t use a simple average. Instead, our system considers things like how recent a review is and if the reviewer bought the item on Amazon. It also analyses reviews to verify trustworthiness.

Bluethunder
5.0 out of 5 stars This is a must read book
Reviewed in Australia on 7 August 2018
Verified Purchase
One of the great things about book club is that we chance upon books that we might not normally even be aware of; and, of course, one is obliged to read them. This means that great and unexpected pleasures can be enjoyed. The Penguin Lessons is an excellent example of this phenomenon. It is a well written,thoroughly enjoyable book with an extraordinary story line and a number of unexpected twists and turns. I believe it is real. And, for even great pleasure it was narrated by Bill Nighey with the cleverest accents.

Set in South America, a young English man sets out to find adventure. Well, adventure finds him - in the form of a very sad and oil encrusted penguin. The story of the recovery of the penguin and the development of an extraordinary bond between the author and the penguin is delightful. Furthermore, the story of how the penguin captivates an entire school and the village around it is not only extraordinary but quite moving. There is serious sadness along with hilarious events.
The penguin and a young man coming of age make for a great and highly recommended read.
Read more
Helpful
Report abuse

Jenny D
5.0 out of 5 stars Delightful!
Reviewed in Australia on 7 January 2017
Verified Purchase
This is a story about a teacher who accidentally adopted a penguin in South America. Very interesting, and great read.
Read more
Helpful
Report abuse

ShelleyCS
5.0 out of 5 stars Delightful story of life with a penguin
Reviewed in Australia on 28 May 2019
I purchased this as an Audible book. It is beautifully read and tells a sweet, poignant story of a young English school teacher working in Argentina and recounts his memories of a period of his life spent with a magellan penguin that he rescued from an oil slick. This charming creature delighted the boarders at the school and contributed to their development in unexpected ways.
Read more
Helpful
Report abuse
See all reviews

Chris from Hampshire
5.0 out of 5 stars An Amazing True Story
Reviewed in the United Kingdom on 21 July 2018
Verified Purchase
True stories concerning people and animals the become books, are more often about cats or dogs. This story bucks the trend and is about a Penguin and the attachment he has for his human saviour and friend, in the form of Tom Michell.

This book is delightful and something that bit different. It really is heartwarming and touching.

It is amazing the power of animals, especially in this day and age where kindness and understanding is often in short supply. Dumb animals are not so dumb, you just have to take the time to 'listen' to them and take them to your heart.

Sylvia
5.0 out of 5 stars A very heartwarming story
Reviewed in the United Kingdom on 25 February 2019
Verified Purchase
This is the story of a young Englishman who travels to Argentina to take up a teaching post in an elite English school in the southern suburbs of Buenos Aires. On a week-end break in Uruguay he is adopted by a lone penguin which, being an English animal lover, sets him up for a hilarious tale of getting the penguin through the immigration authorities when he takes it back to Buenos Aires with him. Thereafter the penguin plays a pivotal role in this young teacher's connection with his students, he takes an active part in school life as a mascot for their rugby team and there are many amusing but at the same time heartwarming narratives of life for a penguin in a boys' boarding school. An absolutely wonderful story, beautifully written, with an enchanting twist at the end. I recommend it to people of all ages and walks of life.
Read more
9 people found this helpful
Report abuse

Heather B
5.0 out of 5 stars Delightful and Beautifully Written
Reviewed in the United Kingdom on 20 January 2019
Verified Purchase
It’s very rare that I actually part with money for a book by an author I haven’t read before. I’m so glad that when this came up on Kindle Daily Deal recently I did though as it was an absolute delight to read.

The Penguin Lessons is definitely one of those cases where the truth is stranger than fiction as Tom Michell invites readers to go on a journey with him to the South America of his youth, back in the 1970s. The story of himself and Juan Salvador is absolutely beautifully and charmingly written with the characters of both man and penguin, as well as the other people who populate the narrative, just jumping off the page. I loved the way that Mr Michell interpreted looks from Juan Salvador and wrote conversational exchanges between the penguin and his human friends. I came away from the book feeling like I’d actually known – and loved – this penguin myself.

As well as telling the story of Juan Salvador, the author also paints beautiful pictures of the scenery, wildlife, and daily life in Argentina and other areas of South America at that time. It presents a unique snapshot of a unique time and place. And using his artistic skills, he also leaves readers with an illustration of his penguin friend at the end of every chapter, complete with a caption relevant to the incidents recounted.

I can highly recommend this tender, charming, and heartfelt little book. I came away with my heart feeling warmed. Juan Salvador is still touching people’s lives all these years later.
Read more
4 people found this helpful
Report abuse

M L Sparrow
3.0 out of 5 stars 5 This book was really sweet in places
Reviewed in the United Kingdom on 6 October 2017
Verified Purchase
3.5

This book was really sweet in places, but I did occasionally feel my attention drifting. Tom had much the same views and concerns about modern civilisation as me and Juan Salvador was adorable and I applaud anyone who helps an animal in need. I also agree that the penguin had a better life at the school than he probably would have had in a zoo, however, I couldn't help but feel as if more could have been done to put him back in the wild. I'm no expert and I've obviously never been in that position, but it just seemed he jumped to conclusions rather quickly without proper info - and before someone points it out, they didn't have Google then, I know, but there were other ways of researching things!

All in all like I said, this was a sweet book and I love true stories, but there were parts of it that were very slow going...
Read more
10 people found this helpful
Report abuse
See all reviews