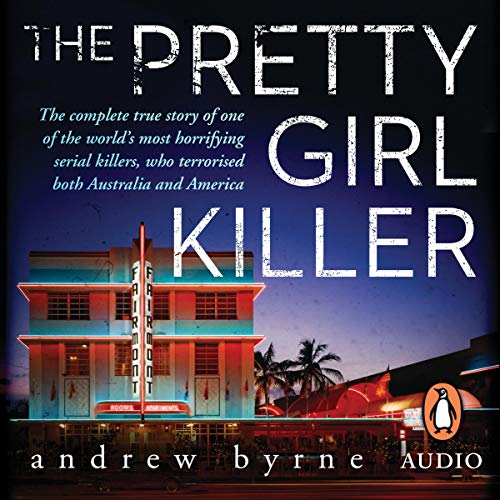 This is the story of Christopher Wilder: the surf-loving son of a decorated naval war hero born in the suburbs of Sydney, who became the most wanted man in America - a psychopathic serial killer who slaughtered more than 16 young women in the USA and is the prime suspect in the infamous Australian Wanda Beach murders.

Wilder was handsome and charming, and time and time again he managed to convince beautiful young women that he was a fashion photographer looking to help them start a career in modelling. What followed were some of the most brutal, sadistic crimes the world has ever seen - as well as a years-long police operation, dogged by missed opportunities and bad decisions, to track the killer down.

Featuring new evidence unearthed from case files and interviews with FBI agents, witnesses and survivors, some of whom have spoken for the first time since the horrendous crimes were committed, The Pretty Girl Killer takes us right into the mind and moment of one of Australia's most heinous exports.

Switch between reading the Kindle book & listening to the Audible narration with Whispersync for Voice.
Get the Audible audiobook for the reduced price of $13.99 after you buy the Kindle book.
Last chance - Ends Thursday!
Learn more about membership
By completing your purchase, you agree to Audible’s Conditions Of Use and Privacy Notice.
Sold and delivered by Audible, an Amazon company

4.3 out of 5 stars
4.3 out of 5
25 global ratings
How are ratings calculated?
To calculate the overall star rating and percentage breakdown by star, we don’t use a simple average. Instead, our system considers things like how recent a review is and if the reviewer bought the item on Amazon. It also analyses reviews to verify trustworthiness.

pamA
5.0 out of 5 stars Enjoyed the book
Reviewed in Australia on 28 August 2019
Verified Purchase
Very enjoyable read but sad to think so many innocent women were killed when he should have been caught and punished back in Australia
Read more
Helpful
Report abuse

Nat
5.0 out of 5 stars The Pretty Girl Killer
Reviewed in Australia on 11 May 2020
Verified Purchase
Could not put this book down.
Highly recommend to anybody who loves a true crime story. Very well written and informative
Read more
Helpful
Report abuse
See all reviews

Beryl
5.0 out of 5 stars The Pretty Girl Killer
Reviewed in the United States on 20 April 2021
Verified Purchase
This book was well written. The author took his time and made sure he gave each victim a good portion of his writing about how she became kidnapped, what took place and where she was finally and very sadly killed and left.
Read more
Report abuse
See all reviews