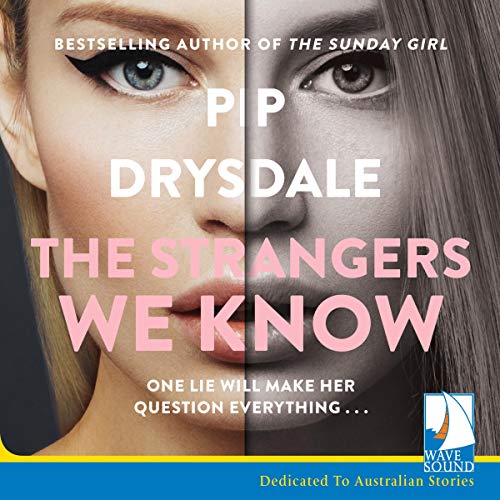 The Strangers We Know

From the best-selling author of The Sunday Girl.

When Charlie sees a man who is the spitting image of her husband, Oliver, on a dating app, her heart stops.

Her first desperate instinct is to tell herself she must be mistaken - she caught only a glimpse from a distance as her friends were laughingly swiping through the men on offer. But she knows it’s no mistake. She took that photo. On their honeymoon. She just can’t let it go.

Suddenly other signs of betrayal begin to add up, and so Charlie does the only thing she can think of to defend her position - she signs up to the app to catch Oliver in the act. But Charlie soon discovers that infidelity is the least of her problems. Nothing is as it seems, and nobody is who she thinks they are.

Learn more about membership
By completing your purchase, you agree to Audible’s Conditions Of Use and Privacy Notice.
Sold and delivered by Audible, an Amazon company

3.8 out of 5 stars
3.8 out of 5
280 global ratings
How are ratings calculated?
To calculate the overall star rating and percentage breakdown by star, we don’t use a simple average. Instead, our system considers things like how recent a review is and if the reviewer bought the item on Amazon. It also analyses reviews to verify trustworthiness.

Julie Pallone
4.0 out of 5 stars Mostly enjoyable
Reviewed in Australia on 27 March 2022
Verified Purchase
I would have given this book 5 stars if it hadn’t been for the annoying sound effects the author added to the story. The thumping of the heart, the dinging of the elevator … superfluous and a bit immature. Other than that, it was a good story with a few good twists.
Read more
Helpful
Report abuse

Mez21
5.0 out of 5 stars Good read.
Reviewed in Australia on 13 August 2021
Verified Purchase
Thoroughly enjoyed this book. The first I've read of Pip's, and it's definitely left me eager to read her other one now. Recommended!!
Read more
Helpful
Report abuse

stine
5.0 out of 5 stars My Reviewing
Reviewed in Australia on 28 March 2022
Verified Purchase
I enjoyed this book , it kept me guessing & I didn’t guess the ending to soon , which is always a plus
Read more
Helpful
Report abuse

Maria P Frino
4.0 out of 5 stars Twists and turns
Reviewed in Australia on 28 March 2021
Verified Purchase
Great read and not what I expected. 4.5 stars. When I started this book I thought it was going to be an easy chick lit read, but there is so much more to this story. Definitely recommend it .
Read more
Helpful
Report abuse

Pete
5.0 out of 5 stars Fantastic read!
Reviewed in Australia on 10 June 2020
Verified Purchase
Well written, great characters - everything you want. What a start for this rising star of an author, can’t wait for the next one!,
Read more
Helpful
Report abuse

Robyn Klap
5.0 out of 5 stars Loved!
Reviewed in Australia on 8 May 2020
Verified Purchase
Such an easy read, finished it in less than a week which is huge for me! 👏🏻👏🏻 Definitely recommend those book!
Read more
Helpful
Report abuse

Veronica
4.0 out of 5 stars Twists that will keep you reading.
Reviewed in Australia on 3 December 2019
I just devoured this twisty thriller. Charlie has discovered her husband is cheating when she inadvertently sees his photo on her friends dating app. Her perfect life starts to spiral downhill after her insecurities, old hurts and paranoia set in. Does she really know the man she has married?

Charlie signs up to the dating app, under a false name, and when she gets a message from Oliver she is shocked to the core by what she reads.

When everything seems lost and Charlie doesn’t know who to turn to she seeks out new friend, Brooke, who she met at her yoga class. She hasn’t been that honest with Brooke but Brooke has secrets of her own.

Even though some of the twists were predictable this didn’t take anything away from this tension-filled and well plotted mystery.

Narrated in the first person by Charlie, she is a relatable character and I could understand her trust issues and paranoia. The chapters are told in episodes, like a TV series which is fitting as Charlie is a low grade actress. She views life as if it were a movie script. The good guy should always win in the end. Shouldn’t he?

The Strangers We Know is twisty and tension filled, with a plot that is sure to hold your attention, making this a book that is impossible to put down.
I received a copy through Better Reading
Read more
3 people found this helpful
Helpful
Report abuse
See all reviews

Diamind
1.0 out of 5 stars Infuriating to read
Reviewed in the United Kingdom on 20 April 2021
Verified Purchase
This does have a good plot line, but the way it was written was awful. Jumped about, very childish style of writing and kept stating the obvious, and whilst I hate not to finish a book I had to speed read through a lot and jump ahead to check out end. Wouldn't buy from this author again
Read more
Report abuse

Mr M P Brear
5.0 out of 5 stars A real page turner
Reviewed in the United Kingdom on 1 December 2020
Verified Purchase
Such a thrilling book, couldn’t stop thinking about it and tore through it in a couple of days. Really clever plot and great characters. Loved it! Second book from Pip Drysdale, the first is great too.
Read more

Mr M P Brear
5.0 out of 5 stars A real page turner
Reviewed in the United Kingdom on 1 December 2020
Such a thrilling book, couldn’t stop thinking about it and tore through it in a couple of days. Really clever plot and great characters. Loved it! Second book from Pip Drysdale, the first is great too.
Images in this review

anonymous
5.0 out of 5 stars Completely swept away with the plot
Reviewed in the United Kingdom on 7 October 2020
Verified Purchase
I picked up this book and didn't put it down for 48 hours! Loved the relevant and relatable heroine! I'm eagerly awaiting the release of the next one!
Read more
Report abuse

Tasha McNee
2.0 out of 5 stars Good plot. Poor execution
Reviewed in the United States on 11 April 2020
Verified Purchase
Has a good backbone of a storyline but very poorly written. Everything was spelled out as if the reader is a complete idiot. Didn't like the writing style at all and a lot of unbelievable progression of the story. Only finished the book to see how it was going to end. Found the whole experience quite frustrating.
Read more
2 people found this helpful
Report abuse
See all reviews