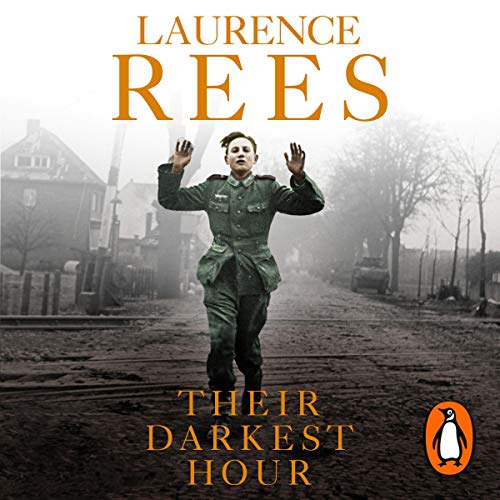 Their Darkest Hour: People Tested to the Extreme in WWII

Award-winning writer and filmmaker Laurence Rees has spent nearly 20 years meeting people who were tested to the extreme during World War II. He has come face to face with rapists, mass murderers, even cannibals, but he has also met courageous individuals who are an inspiration to us all. His quest has taken him from the Baltic States to Japan, from Poland to America and from Germany to China.

Here he presents 35 of his most electrifying encounters. Meet Estera Frenkiel, a young Jewish woman given the chance to save 10 fellow Jews from deportation and death; Peter Lee, a British officer brutally treated by his Japanese captors; Zinaida Pytkina, a female member of the Soviet Union's infamous SMERSH organisation, who took pleasure in killing a German prisoner; Hiroo Onoda, a Japanese soldier so fanatical that he refused to surrender until 29 years after the end of the war; and Petras Zelionka, a Lithuanian who shot Jewish men, women and children for the Nazis.

The devastating first-hand testimony in Their Darkest Hour is both a lasting contribution to our understanding of the war and a powerful insight into the behaviour of human beings in crisis.

Switch between reading the Kindle book & listening to the Audible narration with Whispersync for Voice.
Get the Audible audiobook for the reduced price of $11.49 after you buy the Kindle book.
Final days - Don't miss out!
Learn more about membership
By completing your purchase, you agree to Audible’s Conditions Of Use and Privacy Notice.
Sold and delivered by Audible, an Amazon company

4.5 out of 5 stars
4.5 out of 5
108 global ratings
How are ratings calculated?
To calculate the overall star rating and percentage breakdown by star, we don’t use a simple average. Instead, our system considers things like how recent a review is and if the reviewer bought the item on Amazon. It also analyses reviews to verify trustworthiness.

Terry Phillips
3.0 out of 5 stars Could have added more detail
Reviewed in Australia on 14 May 2021
Verified Purchase
Stories lacked detail and seemed only shallow probably because they were based on TV interviews.
Read more
Helpful
Report abuse

John
3.0 out of 5 stars Stories of cruelty, hardship, suffering and love.
Reviewed in Australia on 29 April 2017
Verified Purchase
Interesting first person accounts of aspects of war (some of which we'd rather forget or pretend never happened). Very readable.
Read more
Helpful
Report abuse
See all reviews

Olesha
5.0 out of 5 stars Important Source Materials for Lawrence Rees’s Books and TV Programmes.
Reviewed in the United Kingdom on 13 May 2020
Verified Purchase
Laurence Rees’s work, including The Nazis: A Warning From History and Auschwitz stand out in both their quality and clarity. This book consists of interviews carried out by Rees during the course of his work, together with his reflections on the interviewees. If you’re impressed by Rees’s work, this book is essential reading, providing further insights. I found the chapter on the indomitable Alois Pfaller, imprisoned by the Nazis between 1934 and 1945, to be particularly touching. Pfaller comments, “I have always stood up for justice, for what is just and reasonable - that was my problem. And also fighting injustice - that was my problem.” Don’t hesitate: buy this wonderful book.
Read more
One person found this helpful
Report abuse

small and covered in hair
5.0 out of 5 stars seriously impressed
Reviewed in the United Kingdom on 17 May 2009
Verified Purchase
I first came across Mr Rees work in 'The Nazis, a warning from history' and also 'Auschwitz' both on DVD.
Their Darkest Hour was the first book of his that I have read, and it was compelling.The sections were long enough to provide all the information, but not too long to lose interest.
The piece that grabbed me was when he wrote about the possibility of someone who would go out of their way to assist you,ie street directions, or giving you a lift, and yet was capable of taking part in the Holocaust and have no guilt about their actions.I met someone in Germany last year who fitted this description.
The book was also good as it wrote from a very human perspective,showing how people adapt to circumstances that are thrust upon them, either doing good or evil.
Read more
5 people found this helpful
Report abuse

fast reader
3.0 out of 5 stars Not quite what I expected
Reviewed in the United Kingdom on 15 December 2019
Verified Purchase
I thought from the description that this would be stories about WW2 events but it was actually an exploration of the motives behind people's actions. A piece of journalism - Interesting but not as described.
Read more
3 people found this helpful
Report abuse

Sally
5.0 out of 5 stars A piece of history amazingly told
Reviewed in the United Kingdom on 21 May 2019
Verified Purchase
Another GREAT book by a great auther.
With years of documentary making and years and years of research and interviews, you know your getting the best historical accounts..
Read more
One person found this helpful
Report abuse

Foge
5.0 out of 5 stars I love this author
Reviewed in the United Kingdom on 2 January 2015
Verified Purchase
I love this author! All his book are factual and written in a really user friendly way. This is almost like the Brest bits of interviews which couldn't fit in his other books. A great compilation of stories - a real must
Read more
Report abuse
See all reviews