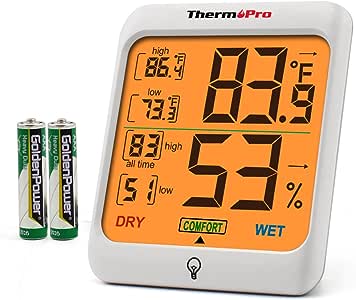 ThermoPro TP53 Thermometer Hygrometer features the ultra narrow frame on the market, making the LCD display/numbers enlarged to ensure you can read the temperature and humidity with ease at almost any distance! Coupled with the yellow backlight, you'll still be able to read the display with no eye strain even in the darkest conditions.

The indoor thermometer and humidity monitor is equipped with professional grade sensors to provide the most accurate measurements, be it for indoor humidity or temperature. Also, the hygrometer features trend indicators, allowing you to be aware if adjustments are necessary for your household such as turning on your AC or humidifier.

Easily reset the temperature and humidity with the press of one behind facing button.

4.7 out of 5 stars
4.7 out of 5
3,563 global ratings
How are ratings calculated?
To calculate the overall star rating and percentage breakdown by star, we don’t use a simple average. Instead, our system considers things like how recent a review is and if the reviewer bought the item on Amazon. It also analyses reviews to verify trustworthiness.

Ned Powell
5.0 out of 5 stars Good value, good design, easy set-up, ideal size
Reviewed in Australia on 9 May 2020
Verified Purchase
After accidentally ruining my old glass analogue thermometer when I left it in my solar dehydrator and it got too hot (it had a range up to ~60 °C), I was in the market for a new one. Initially I only intended to get another glass analogue one, but after some investigation, a digital one seemed like a good idea for a few reasons: most models seem to include a hygrometer (to measure humidity) and they can show you the maximum and minimum temperature and humidity in the past 24 hours. After some research, the ThermoPro TP-55 came recommended and seemed like the best option. I was about to settle on it when I noticed a similar model - the TP-53. Comparing the two, this really seemed like the better model to me, as it’s more compact because the °C/°F button and the 24hr/all time buttons are on the back of the unit rather than on the screen. This means that the TP-53 doesn’t have (and doesn’t need) a touch screen like the TP-55, and these two little-used buttons are relegated to the back of the unit where I think they belong. I mean, how often are you going to be switching between °C/°F? You’ll press it once based on what your country uses and that’s it. Similar with the 24hr/all-time button - you might check it once in a while but that’s it. No need to have these buttons on the main screen taking up screen real-estate.
From what I read, the accuracy and range of both the TP-53 and TP-55 is the same, or at least very similar. For the thermometer, from the ThermoPro website, -50 °C - 70 °C range with an accuracy of ±1.1 °C (±2 °F) (which doesn’t seem great to me, but I’ll live with it). The weird thing is that their website also specifies an accuracy of ±1 °C/°F for the TP-55, but this doesn’t make sense as the gradation of one °C is about twice as big as one °F, which would mean the accuracy for the TP-55 is either ±1.8 °F/1 °C, or ±1°F/0.56 °C but ± 1.0 °F/°C cannot be correct (I would like the company to clarify this, as if it’s the former, the TP-53 and TP-55 have the about the same temperature accuracy, but if it’s the latter, then the TP-55 has twice the temperature accuracy as the TP-53. For the hygrometer, the TP-53 has a range of10-90% relative humidity, with an accuracy of ±2% between 30%-80% RH, and ±3% outside of that range. If this is true, I’m okay with that humidity accuracy and range. And with a temperature range up to 70 °C, I should be able to sit it in my solar dehydrator to measure how warm it gets in there.
The light on this model is also easy to activate with a touch-button on the front at the bottom of the unit, and I prefer the orange lighting to the blue lighting of the TP-55. One you press the light button, the screen lights up until you press the button again, or 15 seconds - whichever comes first. This works well.
I’m using this thermometer in the living room, where it’s measurements help us decide whether to leave doors closed or ventilate or switch a fan on or cook something in the oven etc. It’s heading into winter here in Melbourne and I love being able to walk out in the morning and see the minimum inside temperature overnight. In summer, it’ll be good to see how how high the temperature got during the day.
I can’t comment on the accuracy of the hygrometer as I don’t have another hygrometer to compare it to. But I’m assuming it’s roughly correct. It’s good to see how cooking in the kitchen affects the humidity, or how a dropping temperature increases the relative humidity (as cooler air holds less moisture than warmer air), and when we are approaching the dew-point (when the air is fully saturated). We have a bit of a mould-problem on our ceilings during the cooler months, when the warm air inside touches the cool ceiling at night and moisture condenses on it (because there is no insulation in the roof). This device will be useful for managing our mould problem.
So far, no issues at all, except when I touched the screen while peeling off the plastic when I got it, the display went a bit funny temporarily. The device was really easy to set up and use. I’m hanging it on a nail, but it also comes with a magnet which to me seemed plenty strong enough, as well as a little stand if you want to sit in on a flat surface. And for AU$17 (AU$3 cheaper than the TP-55), it seems like a bargain. I registered online for a 3 year warranty (instead of a 1 year warranty), and hopefully if there’s any issues, I’ll be able to exchange it (as I read in other comments that other customers had difficulty with this). Would recommend.

R
1.0 out of 5 stars Very inaccurate unfortunately!
Reviewed in Australia on 19 July 2020
Verified Purchase
The design is very slick and the back-light fantastic. However the temperature reading is very inaccurate. Here's a picture from a very cold unheated spare room with windows open, the reading shows 15C however temperature is certainly below 10C. Also tested next to a heater but the high temperature reading barely got about 18C. Such a shame for a good looking design.
Read more

BlakDogOz
4.0 out of 5 stars Do what they say
Reviewed in Australia on 5 May 2019
Verified Purchase
I bout 2 of these and they seem pretty accurate and work as described.
Read more
Helpful
Comment Report abuse

Nadia Seo
5.0 out of 5 stars Very satisfied
Reviewed in Australia on 13 December 2019
Verified Purchase
Just what I needed! Works great and I love it how batteries were included so I could set it up and use it straightaway.
Read more
Helpful
Comment Report abuse
See all reviews

Karina Dale
1.0 out of 5 stars Not eligible for return
Reviewed in the United States on 13 September 2018
Verified Purchase
Showed up broken, no option for return or replacement. Buyer beware
Read more

JTEG
1.0 out of 5 stars Works only for a day
Reviewed in the United States on 4 September 2018
Verified Purchase
Don’t buy. Worked fine for about a day, then this. Cycled batteries and still this. No return policy too.

One star is being generous.
Read more

David M.
1.0 out of 5 stars 5% swing between units— can’t trust-- NO RETURN?!
Reviewed in the United States on 8 November 2018
Verified Purchase
I bought three of these (same seller, fulfilled by Amazon) for different parts of my house. Temps accurate but as you can see, one of them is 5% higher on humidity. That’s too wide a swing to trust. You had one job... EDIT: Oh come on, there are no returns on this item. That is nonsense-- it clearly didn't work right out of the box immediately upon opening. That should be illegal.
Read more

Dusguicheon
4.0 out of 5 stars Good Looking Thermometer but check the accuracy!
Reviewed in the United States on 16 July 2018
Verified Purchase
Positives: I ordered two of these ThermPro TP53. They look great, are the perfect size for what I wanted, and the numbers are easy to read. They can be hung on a wall or set on a tabletop with the built in kickstand, or even attached to the fridge with the built in magnet on the back.
Negatives: One of the two I received constantly reads the temperature in the room 1-2 degrees hotter than the actual temperature in the room. We tested them side by side in several different locations and the same one always reads hotter than the actual temperature. The other one tested "on the money" every time so there is definitely a problem with the accuracy of one of the two I bought. Ordinarily I'd return the one that isn't working properly, I mean, a thermometer that isn't accurate isn't worth anything to me, but this time I decided to keep it and use it on my screened in porch. I'd rather it be accurate so I could have used it as I intended in the house but one to two degrees "off" on the screened porch isn't the end of the world.
Read more
76 people found this helpful
Report abuse
See all reviews
Get FREE delivery with Amazon Prime
Prime members enjoy FREE Delivery and exclusive access to movies, TV shows, music, Kindle e-books, Twitch Prime, and more.
> Get Started
Back to top
Get to Know Us
Make Money with Us
Let Us Help You
And don't forget:
© 1996-2020, Amazon.com, Inc. or its affiliates