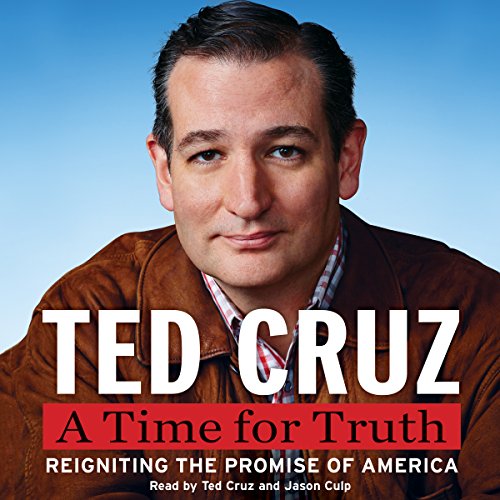 A Time for Truth: Reigniting the Miracle of America

4.8 out of 5 stars
4.8 out of 5
1,070 global ratings
How are ratings calculated?
To calculate the overall star rating and percentage breakdown by star, we don’t use a simple average. Instead, our system considers things like how recent a review is and if the reviewer bought the item on Amazon. It also analyses reviews to verify trustworthiness.

ellison
3.0 out of 5 stars Make America True Again
Reviewed in Australia on 2 December 2016
Shares how his dad was duped by Castro, when he returns to the island it is a mess so when he returns to the United States he has to tell everyone he asked to support Castro, that he was wrong. He shares background on his grandparents and parents, both sides. Says college debates is more difficult the Senate debate. (REALLY?!)

Clerks at the Supreme Court some insightful insider information. Is involved in the Bush 2000 campaign and recount but is too high on himself and does not get a White House position. Gets married and is the lead lawyer for Texas and presents cases at Supreme Court. Occasionally padded with occasionally insightful stories as well as youthful indiscretions.
Read more
Helpful
Report abuse
See all reviews

Tovora
5.0 out of 5 stars A must read for republicans and democrats alike!
Reviewed in the United Kingdom on 9 March 2016
Verified Purchase
Ted Cruz writes brilliantly, the book is quick, witty, while also impressing upon the reader how intelligent Ted Cruz is. I really loved this book. I found I couldn't put it down. I would recommend it to anybody with an interest in politics. Am definitely hoping Cruz gets the nomination for the GOP
Read more
Report abuse

Arthur Blenkinsop
5.0 out of 5 stars Personal and Political
Reviewed in the United Kingdom on 27 October 2015
Verified Purchase
Personal anecdote, insight into the political process and a clear vision for the direction that he believes America should take. A fascinating read, I recommend this wherever your own views lie on the political spectrum.
Read more
One person found this helpful
Report abuse

John Reid
5.0 out of 5 stars Cruz is a rare man who will fight the establishment of Washington
Reviewed in Canada on 25 July 2015
Verified Purchase
Very good insight into a very honest and trustworthy man. He is a rare individual in Washington.
Read more
3 people found this helpful
Report abuse

Charlene
5.0 out of 5 stars Must read and a good read. This is now part of history!
Reviewed in Canada on 3 February 2016
Verified Purchase
Great read! read it at Old Orchard Beach last fall and he.s my guy now! It is a must read, easy and informative.
Read more
Report abuse
See all reviews
Back to top
Get to Know Us
Make Money with Us
Let Us Help You
And don't forget:
© 1996-2021, Amazon.com, Inc. or its affiliates