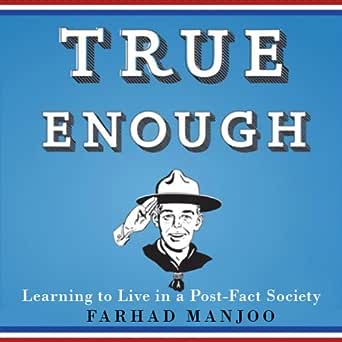 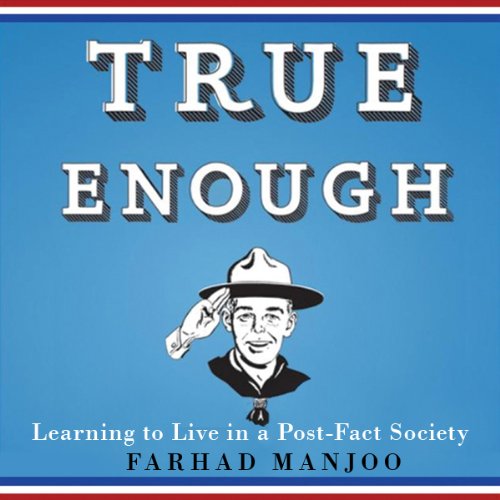 True Enough: Learning to Live in a Post-Fact Society

4.4 out of 5 stars
4.4 out of 5
55 global ratings
How are ratings calculated?
To calculate the overall star rating and percentage breakdown by star, we don’t use a simple average. Instead, our system considers things like how recent a review is and if the reviewer bought the item on Amazon. It also analyses reviews to verify trustworthiness.

RondoReader
3.0 out of 5 stars Good Enough
Reviewed in Canada on 10 December 2008
Verified Purchase
It is, perhaps, the tragedy of our time that new information tools and technologies that should further communication, understanding and cooperation are instead, facilitating our descent into boorish, angry, warring tribes. Mr. Manjoo's short and airy book explores some of the factors enabling this unhappy descent and its consequences. Factors like selective perception, pseudo-expertise and the loss of objectivity in news reporting. Consequences like reality splitting and the deterioration of trust and social capital.

The book is not comprehensive and, since the lack of possible counter actions makes the current descent seem inevitable, it is a bit of a downer albeit enlightening. As might be expected of a contributor to Salon, Mr. Manjoo has a leftish perspective but he does a good job of balancing his examples and observations.

The concepts Mr. Manjoo discusses are important and the book is well worth a read.
Read more
5 people found this helpful
Report abuse

Amazon Customer
4.0 out of 5 stars I second the "eye opener" headline
Reviewed in the United States on 13 June 2020
Verified Purchase
I read several of the negative reviews found here and it was obvious that these were probably written by people that gave up on the book early.
The author uses examples of behaviors from both the right and left, so the claims that's it's a liberal rant are not correct and TOTALLY miss the points being made here. For the right he addresses the swift boat claims against John Kerry made by Republicans and for the left he addresses the claims of election fraud against Bush made by the Democrats. And both are very good examples. Claims that he's just a liberal hack are nonsense, and are actually EXCELLENT examples of the very points that this author makes.
I think it would be very good for our nation to learn about post truth. Each and every one of us can have our own opinions, but the days of having our own facts and truths must come to an end for the sake of our great nation. Post truth threatens our very existence.
Read more
3 people found this helpful
Report abuse

Naji
5.0 out of 5 stars Timely and Relevant
Reviewed in the United States on 19 July 2009
Verified Purchase
In 1974 scientists provided a questionnaire to a group of 237 Midwest high school students to determine who would be considered high-prejudice and low-prejudice. They then asked them a series of questions about the show All in the Family. Their perception of the show's protagonist Archie Bunker couldn't be more different. The students considered low-prejudice viewed Archie as a "bigot, domineering, rigid, loud, and that he mistreats his wife." People considered high-prejudice had a totally different view. They considered Archie a "down-to-earth, honest, hardworking, predictable, and kind enough to allow his son-in-law and daughter to live with him." The show's creators thought it would be obvious to all viewers that Archie was being portrayed as ignorant and plainly racist. Yet the show, which was being watched by more than 100 million viewers every week, was perceived very differently by people. This is just one of many highly entertaining and instructive studies that Farhad Manjoo introduces his readers to.

Liberals who watch FOX news consider it biased and are much more likely to consider MSNBC to be balanced in its coverage of the news. Conservatives feel the opposite. Both groups are watching the same newscast but perceive it in totally different ways just as the All in the Family's viewers did in the 1970's. Yet in addition to perceiving news differently, people watch the news that agrees with their view of the world. Conservatives are more likely to watch FOX news and Liberals MSNBC. Both groups practice `selective exposure'.

In addition to the concepts of selective-perception and selective-exposure and their very important implications, the author deals with the roll, credentials, and influence of experts, objectivity of news, cagey methods of advertising, and hiring of media personalities by government, industry and lobbyists to promote certain policies. Many of the studies that Farhad Manjoo cites in the book were conducted decades ago. It is the application of the findings of those studies to significant news stories of this decade from which the book derives much of its value. True Enough is a very illuminating and entertaining read.
Read more
13 people found this helpful
Report abuse

Amazon Customer
5.0 out of 5 stars Five Stars
Reviewed in the United States on 23 February 2018
Verified Purchase
All voters should be required to read this book!
Read more
4 people found this helpful
Report abuse

Jim Harrigan
5.0 out of 5 stars Alternate Realities and Suspicious Minds
Reviewed in the United States on 16 June 2008
Verified Purchase
Facts are obsolete. Alternative realities are the rule. Trust belongs to yesterday.

Trust plays a surprisingly large role in the well-being of a culture. Manjoo asserts that countries having greater trust typically see higher economic output than do places where trust is low. Further, people are healthier in trusting societies.

It all might seem obvious. A generation should know that we can't go on with these suspicious minds. Yet trust is at a low. Nothing would tear apart a people so thoroughly as mistrust. Manjoo says that people exist in differing realities brought on by internet blogs and cable news. The main-stream media held the role of mediator in political disputes, but that role is now diminishing. I would suggest that science played mediator before the advent of the alternate reality of corporate "sound science".

Manjoo has a way with hitting on ideas that are fundamental to the "truthiness" concept and presents them in a manner that will interest many and many will understand.
Read more
6 people found this helpful
Report abuse
See all reviews
Back to top
Get to Know Us
Make Money with Us
Let Us Help You
And don't forget:
© 1996-2021, Amazon.com, Inc. or its affiliates