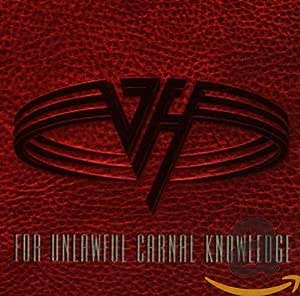 Share
Only 2 left in stock (more on the way).
Quantity:1
Add to Cart
Buy Now

Secure transaction
Your transaction is secure
We work hard to protect your security and privacy. Our payment security system encrypts your information during transmission. We don’t share your credit card details with third-party sellers, and we don’t sell your information to others. Learn more
Details
Ships from
Amazon AU
Sold by
Amazon AU
New (14) from
$18.07 & FREE Delivery

Singer Sammy Hagar continued his streak of success with Van Halen on this album, which debuted at number 1 in 1991 and was the third Hagar performed on. Fighting against censorship with the "subtle" acronym title, this in-your-face album spawned hits and marks a must-have moment in the lifespan of a great rock band.

4.8 out of 5 stars
4.8 out of 5
531 global ratings
How are ratings calculated?
To calculate the overall star rating and percentage breakdown by star, we don’t use a simple average. Instead, our system considers things like how recent a review is and if the reviewer bought the item on Amazon. It also analyses reviews to verify trustworthiness.

P R Baker
5.0 out of 5 stars Classic rock album with second lead singer Sammy Hagar
Reviewed in the United Kingdom on 28 May 2017
Verified Purchase
When I first heard the single Poundcake, it was my introduction to Los Angeles's rock band Van Halen. Eddie
Van Halen is such a distinctive guitar player and this enables Van Halen to stand out from many other
rock bands. My personal favourites are Poundcake, Runaround and Man on a mission. This album is with
their second lead singer Sammy Hagar and if you like this album it's well worth searching out their earlier albums
with David Lee Roth.
Read more
One person found this helpful
Report abuse

james jones
5.0 out of 5 stars after getting hold of the Van Halen live: right here, right now concert video...
Reviewed in the United Kingdom on 5 March 2015
Verified Purchase
i was completely impressed at how good a band VH are. you know what its like, walking around playing songs in your head over and over again in a joyfully obsessive way. the songs on that DVD were definitely the soundtrack to the winter of 2014/15. now just on the cusp of springtime I have gone from possessing no VH albums to acquiring 10 of their best ones. this particular album sees a return to a harder edged sound that was slightly lost on OU812 but was there on 5150. when I say harder edged I don't mean like heavy metal. I recently saw angus young describe them as a pop band-he was right. VH are a heavy pop band! if you decide to explore my joy don't get sucked into the whole dave was better than Sammy/Sammy was better than dave bulls*** debate because really the band is called Van Halen and the consistency of the quality lies with eddie and alex-its their band. 10/10
Read more
3 people found this helpful
Report abuse

Ongo Gablogian
4.0 out of 5 stars Worst title ever. Very good record
Reviewed in the United Kingdom on 31 March 2010
Verified Purchase
Apparently, someone told Sammy that an acronym of "For Unlawful Carnal Knowledge" was the true origin of the four-letter word. That aside, it`s a really poor title; even I would have to admit that if VH have a weakness, it is their album titles (apart from their third and fourth albums). I remember buying this on the day of release, after months of fevered, teenage anticipation. In those days you had to wait, no websites around with stolen excerpts to give you any idea what would be coming; although the album opener "Poundcake" was released as a single beforehand and that was more than enough to keep me very interested.

That is a cracking opener; Eddie uses a drill for chrissakes! Near his then-new Peavey Wolfgang! Sammy`s words work better on this album than any other with VH...maybe he was more settled by this album? But they did take a while over this release, so maybe the other band members had a chance to throw out his first batch of pure cheese and he came back with something a bit more grown-up. Some of the songs, like "Judgement Day" and "Pleasure Dome" are lyrically interesting, almost deep, and Eddie explores some new ideas and tricks too, along with the magnificence that we would expect from probably the greatest living guitarist. There are a couple of real clunkers, stinkers even, like "In `N` Out", and "Spanked" (which would make my top three of bad VH songs - there are only about five poor songs on all the records put together, after all), but there`s enough to compensate elsewhere. "Spanked" truly is horrid though.

My favourites are obviously "Poundcake", but "The Dream Is Over" and "Top Of The World" (which picks up the riff that ends the DLR-era classic "Jump") are great feel-good songs. "Right Now" has been overplayed but it`s dramatic stuff and instead of a synth, it`s a real piano that stars. Eddie had been noodling around with "316" for a while before he gave it a title (son Wolfgang`s birthday, March 16th) and it`s lovely.

All in all a very good record, heavier than the two preceding releases, and there are signs of the seriousness which really showed its face on the follow-up album, "Balance".
Read more
6 people found this helpful
Report abuse

Mark.O
3.0 out of 5 stars Ok
Reviewed in the United Kingdom on 29 December 2020
Verified Purchase
Not the best halen for me but worth having
Read more
Report abuse
See all reviews
Back to top
Get to Know Us
Make Money with Us
Let Us Help You
And don't forget:
© 1996-2021, Amazon.com, Inc. or its affiliates