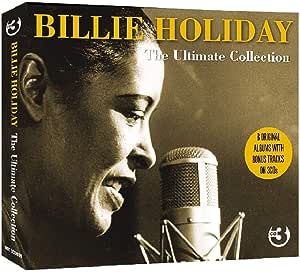 Secure transaction
Your transaction is secure
We work hard to protect your security and privacy. Our payment security system encrypts your information during transmission. We don’t share your credit card details with third-party sellers, and we don’t sell your information to others. Learn more
Details
Ships from
Amazon UK
Sold by
Amazon UK
New (4) from
$19.10 & FREE Delivery

The gloriously emotive voice of blues singer Billie Holiday remains a source of enjoyment and inspiration today, five decades after her tragic demise. Perhaps Frank Sinatra got it right when he said simply that she was 'one of the most important influences on American popular singing' - and remains so today. Featured here are 8 of her original albums, digitally remastered for optimum sound quality.

4.7 out of 5 stars
4.7 out of 5
502 global ratings
How are ratings calculated?
To calculate the overall star rating and percentage breakdown by star, we don’t use a simple average. Instead, our system considers things like how recent a review is and if the reviewer bought the item on Amazon. It also analyses reviews to verify trustworthiness.

Thespionic
4.0 out of 5 stars All You Need to Know About Billie
Reviewed in the United Kingdom on 3 June 2013
Verified Purchase
This is cracking value with over 80 of her tracks from two thirds of her studio album output. Most of the output was in fact `compilation' albums. These were issued before her first studio album in 1952 - mainly from all of her singles which were issued from 1934 to 1946. The rest were issued after her death. This set features 8 of her 12 original studio albums. The albums' span from 1952 to 1957. She died in 1959, aged just 44. `Solitude' is a re-release of her first album `Billie Holiday Sings.'
BH had just two number one singles. Her number one in the R&B charts, `Trav'lin' Light,' is on what I consider to be the best album of the collection - `Lady Sings the Blues.' Of course, her biography, and eventually the film of her life (Diana Ross) came from this album's title.
Her best two albums of this collection are thought to be (All Music ratings) the aforementioned, `Lady Sings' and `Music for Touching.'
The album `Velvet Mood' is apparently `out of print' and so this set is just about the only place that you can get it. BH had such a strong, almost gritty voice which was so distinctive. The support musicians are just wonderful - quality all round.
A lot of the songs on here are from the `American Song Book.' At times I found them rather one paced, samey or a little too low key but it seems that this was the style of the day. I would have preferred a little more up tempo stuff over the piece but I did enjoy listening to such a great musical icon.
Read more
13 people found this helpful
Report abuse

Matt
5.0 out of 5 stars Great Voice, Great Songs
Reviewed in the United Kingdom on 29 July 2014
Verified Purchase
This was bought as a present for my mother in law after she complimented us on our own 3 disk colection of Billie Holiday music.
Billie Holiday is one of the finest female vocalists af all time, with a rich voice that gets across emotion, tenderness and grit all at once. She had a range from Blues through to R&B as well as romantic ballads. This collection ticks all the boxes and provides a pretty good in depth look at the music across her career.
For those who own no Billie Holiday this is a great way to get a taste of her work before looking a little deeper.
Read more
5 people found this helpful
Report abuse

Thank You with all my heart.
Read more
Report abuse

WizBiz
4.0 out of 5 stars Billie at her best
Reviewed in the United Kingdom on 3 May 2018
Verified Purchase
Good quality recordings. Hard to come by nowadays.
Read more
One person found this helpful
Report abuse
See all reviews
Back to top
Get to Know Us
Make Money with Us
Let Us Help You
And don't forget:
© 1996-2021, Amazon.com, Inc. or its affiliates