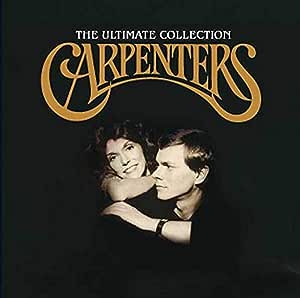 Secure transaction
Your transaction is secure
We work hard to protect your security and privacy. Our payment security system encrypts your information during transmission. We don’t share your credit card details with third-party sellers, and we don’t sell your information to others. Learn more
Details
Ships from
Amazon AU
Sold by
Amazon AU
New (9) from
$13.30 FREE Delivery on first order.

Import two CD collection from the Soft Pop duo. From their humble beginnings in the late '60s, Karen and Richard Carpenter were one of the most successful Pop duos in musical history. With Karen's absolutely perfect vocal delivery and Richard's creative arrangements, they were unstoppable. Even Karen's death in 1983 didn't stop their popularity from blossoming with each year. This two CD set brings together their hits, album tracks and more, and is the best Carpenters collection on the market! 35 glorious Pop nuggets that will melt the heart and uplift the soul including 'Close to You', 'Ticket to Ride', 'We've Only Just Begun', 'Superstar', 'Rainy Days And Mondays', 'Bless the Beasts And the Children', 'Hurting Each Other' and many more. UMTV. 2006.

4.8 out of 5 stars
4.8 out of 5
1,006 global ratings
How are ratings calculated?
To calculate the overall star rating and percentage breakdown by star, we don’t use a simple average. Instead, our system considers things like how recent a review is and if the reviewer bought the item on Amazon. It also analyses reviews to verify trustworthiness.

J. J. Bradshaw
5.0 out of 5 stars Still the finest female vocalist I've heard, but the Carpenters were so much more than just Karen Carpenter's voice, wonderful
Reviewed in the United Kingdom on 30 September 2017
Verified Purchase
For some reason the Carpenters have been passed by the revival of other 70's and early 80's acts such as Abba and are dismissed as not much more than hotel lobby music by some. Easy listening is sometimes derided as a lesser musical genre yet you can't make music as good as the Carpenters did without being supremely talented. I think it is long past time for a Carpenters revival and for a younger audience to discover this wonderful music.

Those already familiar with their music don't need to read a review of this disc, the track list is all they need to know. For younger people, or even those who let the music go past them when they were younger the Carpenters were a brother and sister act, Karen and Richard Carpenter, combining Karen's painfully beautiful voice with Richard's writing and arrangement skills to produce music which was never less than good and which at its best was some of the finest popular music ever recorded, and I say that advisedly and not as a throwaway comment.

Karen Carpenter died of complications caused by her anorexia at only 32 years of age, although remembered for her wonderful voice she was also a good drummer. When writing reviews it is easy to fall into hyperbole and using superlatives cheaply, but Karen Carpenter was a staggeringly fine singer, her voice was velvety smooth with a gorgeous clarity and warmth and a very distinctive tone. Her delivery was perfect and everything she sang felt so natural, unforced and was delivered with just the right emotional depth. I know it is easy to say that an artist is unique or special, and to add the appellation of "great" but if any singer deserved such accolades it was Karen Carpenter. Richard Carpenter has lived in the shadow of his sister yet he was not just a straight man in the background, he was a very accomplished musician and very few people have been able to match his arrangements. Their music was beautifully crafted and delivered with a sense of precision, or perhaps perfection might be a better word, yet it never sounded clinical or lacking in emotion, to achieve that takes a lot of talent and skill.

This double disc includes all the well known hits and a few not so well known numbers. They are arranged chronologically, which I think is sensible and it allows you to follow their musical development. How to pick stand out tracks from such a collection? There are so many special songs here, my own favourite is still "Goodbye to Love", the words are even more poignant given Karen Carpenter's life story, her voice never sounded better and there is "that" guitar solo by Tony Peluso, no matter how many times I listen to this song it moves me. Although Karen Carpenter could deliver melancholic love songs with aplomb, she could also sing more upbeat songs, Hank Williams "Jambalaya" has been covered by more acts than I can name yet to me the definitive version is that by the carpenters which is wonderfully uplifting and joyous. One of the more unusual songs is "Calling Occupants of Interplanetary Craft" a cover of a Klaatu song, one of the only real criticisms I have of any Carpenters song is the irritating radio DJ intro to this track yet once the song starts it has a riff which just enters the head and which remains wonderfully musical. There are so many other memorable songs, "We've Only Just Begun", "Rainy Days and Mondays", "Top of the World", "Please Mr Postman", "Solitaire"....it goes on, wonderful, wonderful, wonderful!

I think any music lover should have a collection of the Carpenters greatest hits, and this is a perfect collection. I bought this CD to replace an earlier greatest hits disc which somebody was kind enough to "borrow" and fail to return and it hasn't disappointed. The only reason I rate this as 5* is because I can't give it more than 5*.
Read more
21 people found this helpful
Report abuse

Jimmy Stix
5.0 out of 5 stars Calling To Us Down The Years!
Reviewed in the United Kingdom on 16 September 2016
Verified Purchase
I had "ummed" and "arred" for many a long year about whether to invest in a Carpenters collection and I am so glad that I eventually went for this one. Karen's sweet, clear, pure voice reaches down the years and reminds us just what we lost when she passed away so young at 32. Who knows what she and Richard might have done had she not? There are a whopping 35 tracks on this double CD and it's great value for money. I cannot compare it directly to the other compilations out there but "Gold" has only 20. All the hits are here; "We've Only Just Begun", Rainy Days and Mondays", "Goodbye To Love" etc. as well as lesser known songs (to the casual listener like me at least) such as their version of "Solitaire". No one did heartache quite like Richard and Karen and she really has you believe it when she says "....talking to myself and feeling old..." on Rainy Days. Carpenters have suffered in the past from being labelled "kitsch", "mush", "saccharin" etc., and I think this is unjust. It used to be considered a bit naff to admit to liking Abba too. Some complained that their sound was overproduced with too much overdubbing but I think this helped to create a unique unmistakeable sound and when it is a voice that gorgeous,overdubbing herself, it's like liquid gold pouring in your ear. Yucccck! I hear some of you say and I get why for some it is a little off putting. I think if you listen closely, especially with head/earphones on, to those achingly beautiful and often heart-breaking lyrics, arranged by Richard and delivered by Karen like only she knew how, it might just change a few minds.
Read more
12 people found this helpful
Report abuse

DBWM
5.0 out of 5 stars Just the best!
Reviewed in the United Kingdom on 7 June 2014
Verified Purchase
My dear old Dad was an original Carpenters fan, and I spent years of my childhood listening to the dulcet tones of the wondrous Karen Carpenter. And now that I am increasingly old and decrepit, the sheer magic of Karen Carpenter's voice still brings me enormous pleasure. And, although Richard Carpenter was always an egocentric, self-obsessed, truly weird twerp, overflowing with jealousy at his sister's talent and resulting fame, he could at least arrange a tune. But, it's the magic of Karen's unique voice that is the essence and the quality of the Carpenters. This is an excellent CD, and has all the best Carpenters recordings to listen to and enjoy. If you are already a fan, you will be well pleased with this album - but if you are not already a fan...what are you waiting for!
Read more
2 people found this helpful
Report abuse

Mr. R. B.
5.0 out of 5 stars Great Memories
Reviewed in the United Kingdom on 15 February 2021
Verified Purchase
I had every one of their original record albums growing up in the States in the 70's. Found this collection while living in the UK. Every song brigs back great memories.
Read more
Report abuse
See all reviews
Back to top
Get to Know Us
Make Money with Us
Let Us Help You
And don't forget:
© 1996-2021, Amazon.com, Inc. or its affiliates