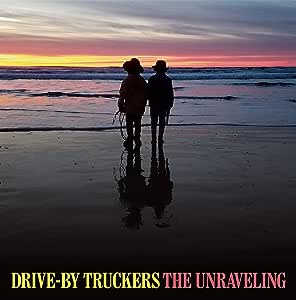 Share
Temporarily out of stock.
Order now and we'll deliver when available. We'll e-mail you with an estimated delivery date as soon as we have more information. Your account will only be charged when we ship the item.
Quantity:1
Add to Cart
Buy Now

Secure transaction
Your transaction is secure
We work hard to protect your security and privacy. Our payment security system encrypts your information during transmission. We don’t share your credit card details with third-party sellers, and we don’t sell your information to others. Learn more
Details
Ships from
Amazon AU
Sold by
Amazon AU
The Unraveling (Vinyl) has been added to your Cart
New (8) from
$39.51 + FREE Delivery

Drive-By Truckers’ 12th studio album and first new LP in more than three years – the longest gap between new Drive by Truckers albums – The Unraveling was recorded at the legendary Sam Phillips Recording Service in Memphis, TN by Grammy® Award-winning engineer Matt Ross-Spang (Jason Isbell, Margo Price) and longtime DBT producer David Barbe. Co-founding singer / songwriter / guitarists Mike Cooley and Patterson Hood both spent much of the time prior doing battle with deep pools of writer’s block. The songs that eventually emerged are among Drive-By Truckers’ most direct and pointedly provocative, tackling the myriad horrors of our new normal through sincere emotion and unbridled heart. Indeed, Armageddon’s Back in Town takes a whirlwind joyride through the whiplash of events we collectively deal with each day while the concluding Awaiting Resurrection dives headfirst into the despair and pain roiled up by these troubled times. The remarkable songcraft found on The Unraveling receives much of its musical muscle from the sheer strength of the current Drive-By Truckers line-up, with Hood and Cooley joined by bassist Matt Patton, keyboardist / multi-instrumentalist Jay Gonzalez, and drummer Brad Morgan – together, the longest-lasting iteration in the band’s almost 25-year history. The LP also features a number of special guests, including The Shins’ Patti King, violinist/string arranger Kyleen King (Brandi Carlile), and North Mississippi All-Stars’ Cody Dickinson, who contributes electric washboard to the strikingly direct Babies In Cages.

4.6 out of 5 stars
4.6 out of 5
447 global ratings
How are ratings calculated?
To calculate the overall star rating and percentage breakdown by star, we don’t use a simple average. Instead, our system considers things like how recent a review is and if the reviewer bought the item on Amazon. It also analyses reviews to verify trustworthiness.

G. Duff
5.0 out of 5 stars Continued Excellence
Reviewed in Australia on 7 February 2021
Verified Purchase
Another great album from the Truckers. Excellent musicianship combined with good songwriting as is usually the case with this band. If you like quality "Americana" you will most likely love this.
Read more
Helpful
Report abuse
See all reviews

ZibZab
3.0 out of 5 stars Something's come Unravelled...
Reviewed in the United Kingdom on 3 February 2020
Verified Purchase
Oh dear. DBT have become unrecognisable from the band that brought us such classic albums as Southern Rock Opera and The Dirty South. Over the last couple of albums they've become unrecognisable as the band that brought us Go-Go Boots. This, while still a great album worthy of 3 stars, is another step on the journey, and a real disappointment.

Patterson Hood is angry, and these are some of his angriest songs for many a year. But this isn't the young man's anger of Putting People on the Moon - this is middle-class anger. Babies In Cages just might be the angriest song he's written, or it might be Awaiting Resurrection. But it's a "sitting in the armchair having a nice mug of cocoa" type of anger. The lyrical bite is still there, but it's not quite as sharp as it used to me. The loud, rocking guitars have given way to a few gentle strums on an old acoustic. Old man's anger. (Hey, they should call their next album that...) A few other songs are nice enough, but they're going over new ground, there's nothing here that's essential.

Cooley, on the other hand, contributes only two songs, and the second, grievance Merchants, is truly terrible. No longer is Dancin' Ricky the worst song in the DBT catalogue.

Both English Oceans and American Band grew on me with repeated listens. I really hope this one does too, but I don't hear enough to it to keep me listening. It's a shame, but if this is the best they can come up with after 3 years away, something really has unravelled.
Read more
9 people found this helpful
Report abuse

Mr. D Green
1.0 out of 5 stars Bring Back Jason!
Reviewed in the United Kingdom on 27 February 2020
Verified Purchase
What the heck is this load of rubbish? Utter and complete tosh!
DBT haven't been the same since they kicked Jason out of the band. Their music has just gone from bad to worse.
They need a decent singer and music with a lot more tune. This album is a wall of noise, with an old fella droning-on about how bad life is. Makes Ozzy Osborne's Suicide Solution sound upbeat. Think DBT have gone further than they should have. Time to "call it a day" guys.
Read more
5 people found this helpful
Report abuse

rob w
5.0 out of 5 stars More From Southern Gothic
Reviewed in the United Kingdom on 4 April 2020
Verified Purchase
Drive-by Truckers have been one of the leading southern rock acts they plough a country/southern rock furrow with a strong leaning towards famous figures from Americas past such as Lynyrd Skynyrd, George Jones, George Jackson, John Ford and Neil Young. There sound has a distinct southern rock sound drawing from bands such as the afore mentioned Skynyrd and The Allman Brothers Band. This album brings a new element to their music in that a couple of the songs have a distinct political edge 21st Century America and Babies In Cages both take a look at Trumps America. The first song on the album has added a new element to the sound with a string section it then moves on with the usual country rock I particularly liked Armageddon's Back In Town and Awaiting Resurrection. This album is a pretty good Drive-by Trucker record although not one of the best, those would be Southern Rock Opera and The Dirty South but it is still worth a listen.
Read more
One person found this helpful
Report abuse

Tordal
5.0 out of 5 stars The Unraveling is... here!
Reviewed in the United Kingdom on 23 February 2020
Verified Purchase
An amazing record. I feared that it would be difficult to top American Band. But in the few weeks it has been living with me, all the signs are that this tough, angry, moving collection is really special.
Read more
One person found this helpful
Report abuse

Aquarist
5.0 out of 5 stars Back on form.
Reviewed in the United Kingdom on 6 March 2020
Verified Purchase
Their last album was very good and and this is up there with it. Their last two albums are way better than 2 or 3 that preceeded them. DBT are back on track. This is among the best of their albums.
Read more
Report abuse
See all reviews
Back to top
Get to Know Us
Make Money with Us
Let Us Help You
And don't forget:
© 1996-2021, Amazon.com, Inc. or its affiliates