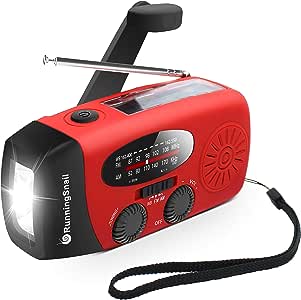 MD-088s Crank radio receives AM/FM/7 NOAA Weather channel to get up to date with the latest weather when tornado, flood, storm is around the corner;
1000 mAh power bank for charging your phone in case of the emergency, bright long lasting 1W LED flashlight to keep you safe in case power outage.

More Power to You
- Hand cranking: 1 Minute of cranking supports over 20 minutes of light or 5 -10 minutes of radio listening;
- Solar charging: Place the radio with solar panel under the sunlight;
- Micro USB input: Charge Cell Phone and USB devices directly.

4.5 out of 5 stars
4.5 out of 5
5,709 global ratings
How are ratings calculated?
To calculate the overall star rating and percentage breakdown by star, we don’t use a simple average. Instead, our system considers things like how recent a review is and if the reviewer bought the item on Amazon. It also analyses reviews to verify trustworthiness.

Hammer
5.0 out of 5 stars Decent Unit with good capabilities for a good price
Reviewed in the United States on 3 March 2017
Size: 088sVerified Purchase
I'm quite pleased with this little unit. It may not be perfect, but it's only twenty bucks, so it gets five stars. Amazon says it has a 1000 mAh power bank, but the included manual says it's 1200 mAh. I would estimate it's between 1000 and 1100 mAh.

The flashlight is not real bright, but good enough for most general tasks in the dark. There are no brightness or flash modes, just simply on or off.

The radio works well enough - the volume goes up very rapidly with the volume control - at 10% of the way, it's already quite loud. I haven't tried it all the way up. The tuning is quite sensitive (tuning changes quickly with slow turning of the dial), but not too sensitive to be able to tune to stations when you're careful. Sound quality is thin and bright, but who cares - this isn't for music listening. There is no headphone jack. The antenna works fine for FM and Wideband, it's kind of short, but helps with reception.

The charging crank turns fine, but it takes work to do so. One minute of cranking makes my hands tired and a bit sore. Five minutes of cranking is alot of work! Part of the problem is that it is hard to find a good place to hold the unit while cranking without having to grip it harder than you should have to. Also, the knob that you hold on the crank is somewhat small. But for a minute at a time it's all fine.

You can charge the unit via USB with the included cable, which is definitely the easy way to accomplish that. You can also charge external devices from the internal battery. I don't know the output current that it provides, but it charges my iPhone 5. More details below.

I made a few tests for your info:

With the unit completely drained, I cranked 130 revolutions (about 1 minute) and then turned on the flashlight. The first 20 minutes shone normally, then started to get dimmer and dimmer. But it kept shining. And shining. And shining. Finally, after over 9 hours of constant dim light I turned on the radio at the same time and very shortly everything went out. Who knows how much longer it would have shone on. Bear in mind almost all of those 9 hours were very dim light, but in total darkness, still very useful to not trip on things when pointed at your feet and do normal tasks when pointed at what you're doing. Good for emergencies.

Then with the unit completely drained again, I cranked 130 turns and then turned on the radio. With moderate volume, it played for 12 minutes before dying.

How about charging phones? I have a rather old iPhone 5. With the flashlight completely drained, I cranked 1300 turns (10 minutes) - no small feat! Then I plugged in my phone to charge from the unit. It added about 2% to my phone battery before it stopped charging. I then placed a phone call (all with no cellular data, wifi, or location services on, and in low battery mode). My call lasted for 5-6 minutes until those 2% had been used. Bear in mind that my phone battery is not what it used to be so your mileage my vary.

I also tested the capacity by charging the unit fully via USB. I'm not sure how long that took, but for sure less than 6 hours. Then I charged my iPhone 5 (again with the battery saving settings in place). It raised my phone battery level by 75% before it stopped charging. That took just over an hour.

Another thing I tested: with the unit fully discharged, I connected my phone and started cranking. While cranking it was providing charge to my phone.

I haven't specifically tested the solar charging, but I did set it in the sun and it looked to be charging. Actually, even under bright indoor lights it shows as charging.

Coree
1.0 out of 5 stars it was pretty worthless. So I’m changing my rating for 5 ...
Reviewed in the United States on 4 June 2018
Size: 088sVerified Purchase
When I first got product it seemed to work really well. I was without power for 15 hours yesterday thanks to a storm so I figured I would really try this product out. The solar charging did not work at all. You have to crank it a lot to even get the radio to stay on for a few minutes and it would charge my phone for about 10 seconds then stop. Needless to say, it was pretty worthless. So I’m changing my rating for 5 stars to 1 star. I am extremely disappointed in this product.
Read more
518 people found this helpful
Report abuse

Kel Varnsen
5.0 out of 5 stars Be smarter than me, get this before you need it
Reviewed in Canada on 9 October 2018
Size: 088sVerified Purchase
When tornadoes hit Ottawa recently we were without power for 2 and a half days. We quickly realized that unless we wanted to sit in a running car, we didn't have a radio and didn't have a way to charge our phones. We also didn't have very many good flashlights. This device solves all those problems.

We got it yesterday and I used it a bit today. The LED flashlight is really bright and local radio comes in clear. The crank is easy to use and it is easy to plug in to my phone to charge it. You can also plug this device into the wall using a phone charger to keep it charged until you need it. Hopefully we won't have to use it for an extended period any time soon, but I am really glad we now have it.
Read more

Antithesis
4.0 out of 5 stars Does not Hold a Charge
Reviewed in the United States on 11 December 2018
Size: 088sVerified Purchase
Update:

So within 24 hours a representative from Running Snail was in contact with me, and within seven days I had a replacement one delivered to my house free of charge. This flashlight was in full working condition. I'll put it in the closet and test it in another six months. I can't vouch for the quality of their product as of yet, but they do have outstanding customer service.

I bought this as part of my hurricane preparedness kit. Out of the box it worked just fine; cranked it up and the battery worked, as did the flash light. Six months later I take it out of the closet again and I crank it up and it doesn't hold a charge. If I turn the light or radio on while cranking it'll flicker for a moment or two, but after that it goes completely dead. I tried winding it strait for five minutes and nothing.

Thankfully I re-tested this before ever having an emergency. Relying on a poor product like this in an emergency situation could be disastrous, or even life threatening.
Read more
305 people found this helpful
Report abuse

Running Snail Customer Service reached out to me and offered to refund/replace the radio based on my review. I politely declined.

I just want to make it clear that the radio/flashlight/charger works well as-is but with a design review/feature "fine tuning" (no pun intended, see my review below) the product will only get better.

The feature set is nice. Super easy to operate.

Only gripes are the flashlight with its big dark spot in the center of the beam pattern and the selectivity of the tuner (ability to discern and tune into various stations) makes station selection "interesting", to say the least.

Otherwise, I'm happy with it.
Read more
9 people found this helpful
Report abuse
See all reviews
Get FREE delivery with Amazon Prime
Prime members enjoy FREE Delivery and exclusive access to movies, TV shows, music, Kindle e-books, Twitch Prime, and more.
> Get Started
Back to top
Get to Know Us
Make Money with Us
Let Us Help You
And don't forget:
© 1996-2020, Amazon.com, Inc. or its affiliates