International Product from outside Australia
Delivery rates Return policy
Got a mobile device?
You’ve got a Kindle. 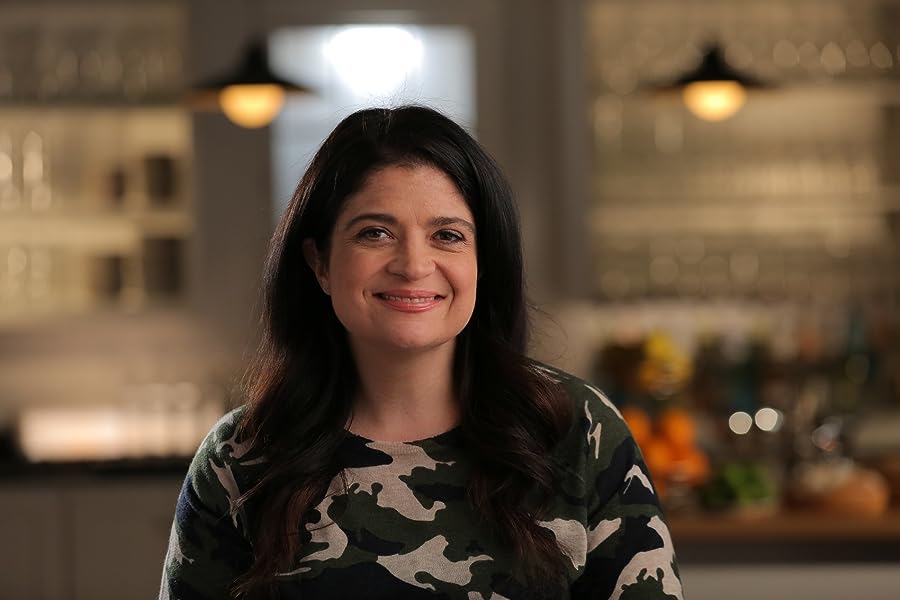 by Alex Guarnaschelli (Author)
2.5 out of 5 stars 3 ratings
See all formats and editions
Sorry, there was a problem loading this page. Try again.

Get 90 days FREE of Amazon Music Unlimited
with the purchase of any eligible product. Shop now
Start reading Vegetarian Diet cookbook / guide on your Kindle in under a minute.

Few American chefs, much less female chefs, can boast leading Michelin-starred restaurants abroad. Chef Alexandra Guarnaschelli can make such a boast, having embarked on a culinary journey in France that saw her working in some of that country’s top restaurants, including esteemed chef Guy Savoy’s eponymous three-star kitchen. Today Guarnaschelli is recognized as one of America’s most accomplished top chefs, acclaimed for her work in the kitchen, as an author, and as a popular television personality.

The daughter of esteemed cookbook editor Maria Guarnaschelli, as a child Guarnaschelli received a global education in food as she was raised on the cuisine of whatever book her mother happened to be working on at the time. During a year devoted to her mother’s work on the manuscript of Classic Indian Cooking by Julie Sahni, Indian cuisine starred at the dinner table; months spent working on Lynne Rossetto Kasper’s The Splendid Table ensured that Italian food appeared regularly on the menu. But it was not the younger Guarnaschelli’s fate to be only a spectator; her mother urged her to be a participant.

&quot;My mother was always coaxing me from my ‘Barbie land’ under the dining room table to peel potatoes, knead bread or assemble a trifle,” says Guarnaschelli, who jokingly continues, &quot;what else could a seven-year-old have wanted from life?&quot;

This early exposure to the foods of the world both expanded her palate and determined her future. In 1991, after Guarnaschelli graduated from Barnard College, she decided to explore her culinary interests and began working under the tutelage of the acclaimed American chef and restaurateur Larry Forgione at “An American Place”.

Sensing both her innate talent and need for wider experience, Forgione encouraged Guarnaschelli to travel and expand her skill set. Taking his advice, she moved to France to do a work-study at La Varenne Culinary School in Burgundy.

After earning her Grand Dipl&ocirc;me in Culinary Arts, she traveled throughout France before moving to Paris to begin a four-day stage at the Michelin three-star Restaurant Guy Savoy. Four days turned into over six years with Guarnaschelli rapidly being promoted to sous chef at La Butte Chaillot, another Savoy establishment.

In 2003, Guarnaschelli became the executive chef at Butter Restaurant, which provided the opportunity for her to develop a menu based on her own choices and point of view. Guarnaschelli created an American menu spotlighting local ingredients in dishes that allowed their flavors to shine.

In 2011, following the success of Butter, she opened The Darby, a unique supper club. In addition to restaurant work, Guarnaschelli also spent a few years instructing budding professional chefs as a Chef-Instructor at New York City’s Institute of Culinary Education, becoming a member of the ICE Advisory Council. In fall 2015, Guarnaschelli opened Driftwood Room at Nautilus South Beach in Miami, Florida and operated the restaurant, successfully, for over 2 years.

In a departure from the kitchen to the stage, in 2015 Guarnaschelli premiered her one-woman live comedy show, Busting My Chops, at Caroline’s on Broadway and also appeared in East Hampton at CAROLINES @ THE BEACH in August 2016.

Guarnaschelli is a judge on Food Network’s prime-time series Chopped (which earned each of the judges a James Beard Foundation Award for best Television Program), Beat Bobby Flay and Grocery Games. Alex has appeared as a judge on Iron Chef Gauntlet, and as both a challenger and a judge on Food Network’s Iron Chef America where she went on to compete on season 4 of The Next Iron Chef. In 2012, she beat nine rival chefs to win The Next Iron Chef: Redemption and joined the ranks of Kitchen Stadium Iron Chefs. Guarnaschelli also won Food Network’s Guy’s Superstar Grocery Games in September 2016, winning $40,00 for the charity of her choice: Alex’s Lemonade Stand.

Alex has also hosted her own daytime instructional cooking shows, The Cooking Loft and Alex’s Day Off. She has appeared on NBC’s Late Night with Seth Meyers, NBC’s TODAY SHOW, The Dr. Oz Show and ABC’s Good Morning America. She has participated, recurrently, in “The Dish on Oz” with Dr. Oz. She is presently hosting her own primetime show on Food Network “Supermarket Stakeout”, is co-judging Food Network’s primetime hit show “Worst Cooks in America” and a recurring co-host on Food Network's Daytime Emmy nominated talk show, &quot;The Kitchen.&quot;

Alex has been featured in publications such as The Wall Street Journal, The New York Times, Food &amp; Wine, Food Network Magazine and Every Day with Rachael Ray. In 2018, Food Network launched Alex’s digital series Fix Me a Plate, in which the New York native takes audiences on an insider’s tour of the city’s best no-frills food spots. The second season launched in Spring 2020.

Alex released her first cookbook, “Old-School Comfort Food: The Way I Learned to Cook”, in spring 2013, which became a New York Times bestseller. In fall 2017, Alex’s second cookbook, “The Home Cook: Recipes to Know by Heart”, is still in print won praise from outlets such as Publisher’s Weekly which noted that “…Guarnaschelli nicely chronicles the changes in a shifting culinary landscape.” Alex is releasing her third cookbook, “Cook with Me: 150 Recipes for the Home Cook” in October 2020 and also has a memoir in the works...

Alex works with many charities but focuses largely on “Alex’s Lemonade Stand”: a charity that seeks to end childhood cancer through funded trials and research. She also works with City Harvest and No Kid Hungry that are both fighting to end ginger and food instability in the U.S. She shops frequently at The Union Square Greenmarket and enjoys her long-term relationships with farmers.

2.5 out of 5 stars
2.5 out of 5
3 global ratings
How are ratings calculated?
To calculate the overall star rating and percentage breakdown by star, we don’t use a simple average. Instead, our system considers things like how recent a review is and if the reviewer bought the item on Amazon. It also analyses reviews to verify trustworthiness.

tug-3
1.0 out of 5 stars This is NOT an Alex Guarnaschelli cookbook!
Reviewed in the United States on 22 June 2021
Verified Purchase
When I first received this book, I thought I must've been sent a bound galley by mistake. The text is unformatted and the book includes no photos. But a cursory glance at the content assures me that this is NOT by Chef Alex -- at least, not the same person who's written several other outstanding cookbooks.

Seriously, this is a major scam. DO NOT PURCHASE THIS BOOK.

1.0 out of 5 stars This is NOT an Alex Guarnaschelli cookbook!
Reviewed in the United States on 22 June 2021
When I first received this book, I thought I must've been sent a bound galley by mistake. The text is unformatted and the book includes no photos. But a cursory glance at the content assures me that this is NOT by Chef Alex -- at least, not the same person who's written several other outstanding cookbooks.

Seriously, this is a major scam. DO NOT PURCHASE THIS BOOK.

Paul F Kroger
1.0 out of 5 stars Not ready for prime time
Reviewed in the United States on 23 July 2021
Verified Purchase
Very disappointing "book" that doesn't seem like something Alex would/should have put out.
Read more
One person found this helpful
Report abuse
See all reviews
Back to top
Get to Know Us
Make Money with Us
Let Us Help You
And don't forget:
© 1996-2021, Amazon.com, Inc. or its affiliates