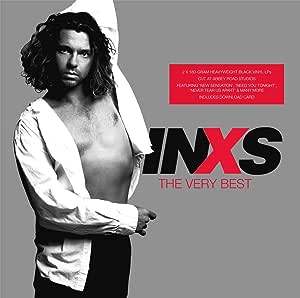 Secure transaction
Your transaction is secure
We work hard to protect your security and privacy. Our payment security system encrypts your information during transmission. We don’t share your credit card details with third-party sellers, and we don’t sell your information to others. Learn more
Details
Ships from
Amazon AU
Sold by
Amazon AU
The Very Best has been added to your Cart
New (11) from
$47.69 + FREE Delivery

4.7 out of 5 stars
4.7 out of 5
931 global ratings
How are ratings calculated?
To calculate the overall star rating and percentage breakdown by star, we don’t use a simple average. Instead, our system considers things like how recent a review is and if the reviewer bought the item on Amazon. It also analyses reviews to verify trustworthiness.

Cyphigh
5.0 out of 5 stars A very impressive compilation
Reviewed in Australia on 30 January 2021
Verified Purchase
Iwould have preferred the tracks to have been in chronological order however if like me you have the seminal"Kick"album then dare I suggest this disc is all you need! I bought this as opposed to other compilations as it contains the classic"Kiss the dirt" INXS were one of the best 80s/90s bands on the planet and this collection is a great representation of their ability to produce both powerful rythmic rock songs as well as beautiful ballads This CD is an absolute bargain Dont miss out!
Read more
Helpful
Report abuse

Amazon Customer
1.0 out of 5 stars Great band...sound quality awful.
Reviewed in the United Kingdom on 2 April 2019
Verified Purchase
Will soon be in the bin, so disappointed expect all release post Beatles 2009 to be remastered otherwise its money for old rope. I already have the 1994 Best of which is better than this. Note to publishers...If you are going to repackage the same old stuff put some effort into improving the sound otherwise you are ripping off the public.
Read more
8 people found this helpful
Report abuse

GRP
5.0 out of 5 stars The Very Best of INXS.
Reviewed in the United Kingdom on 4 November 2015
Verified Purchase
INXS was an Australian rock band formed in 1977 in Sydney. Up to his death, INXS was fronted by the singer Michael Hutchence, whose sultry good looks and magnetic stage presence made him the focal point of the band. The band achieved international success with a series of hit recordings in the late 1980’s and the 1990’s.

In the 1990’s, INXS achieved a greater fan following through Hutchence's romance with fellow Australian singer Kylie Minogue leading to greater acclaim in the United Kingdom. INXS went on to sell over 45 million records worldwide.

This Sydney-based band produced some fantastic songs over the years and this collection provides an excellent overview of their career up until the death of the charismatic Hutchence in 1997 and certainly features all of their best known and loved songs.

There are plenty of massive hits to be enjoyed here. "Need You Tonight", one of their most memorable tracks, "What You Need" a piece of catchy 80’s pop with light, breezy verses and slamming, crashing choruses. "Disappear" follows the same formula with the same success. The piano-led "Mystify" is another commercially-appealing, hook-laden piece of pop, as is “Suicide Blonde". Then there is the dramatic and magnificent "Never Tear Us Apart" which must surely remain Hutchence and INXS' finest hour. But the list goes on.

All-in-all, this album is well worth getting.
Read more
11 people found this helpful
Report abuse

R. J. M.
5.0 out of 5 stars Great compilation of songs!
Reviewed in the United Kingdom on 30 June 2020
Verified Purchase
Another cd supplied by Magpie, used but in great condition. Some really great songs on here my favourites being 'suicide blonde', & 'beautiful girl'. Shame Mick Hutchence life was cut so short, but his songs live on.
Read more
2 people found this helpful
Report abuse

Sally Bop
5.0 out of 5 stars Nostalgia
Reviewed in the United Kingdom on 8 May 2020
Verified Purchase
Bought this after watching a TV documentary on Michael Hutchence. It was a tragic waste of talent when he died. He seemed to have everything- family, fame, lifestyle, millions of fans. So sad.
I loved INXS back in the day and have really enjoyed listening to this CD.
Read more
3 people found this helpful
Report abuse

Jayne Irving
5.0 out of 5 stars Fabulous album
Reviewed in the United Kingdom on 29 May 2019
Verified Purchase
Fantastic album , not one song I don’t like great gift for an INXS fan all the favourites on there ...happy customer 💃🏼
Read more
3 people found this helpful
Report abuse
See all reviews
Back to top
Get to Know Us
Make Money with Us
Let Us Help You
And don't forget:
© 1996-2021, Amazon.com, Inc. or its affiliates