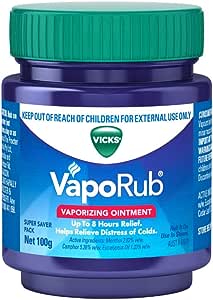 We'll send you a reminder before each delivery.
You save 10% on auto-deliveries for this item through Subscribe and Save. Learn more
Get it Tuesday, 2 Mar.
In stock.
Qty:1
Deliver every:
2 months (Most common)
2 months (Most common)
Ships from and sold by Amazon.com.au
New (4) from
$12.25 FREE Delivery on first order.
Share

Rub-on Massage: Use as rub on massage for relief from cough, blocked nose and muscle aches & pains. Vicks VapoRub is specially designed to release therapeutic vapors for up to 8 hours. Gently massage on chest, throat, neck and back to get help for restful sleep through the night, even during a cold! (3.5g for kids, 7.5g for adults)

Steam Inhalation: Fill a bowl with steaming water (not boiling!) and add 2 tsp of Vicks VapoRub. Let your loved one gently inhale the vapors with a towel over head and the bowl for 10-15 minutes. This can help provide blocked nose relief and ease breathing difficulties. You may repeat this up to four times a day, but discard bowl contents every time. And supervise the kids!

Always read the label. Use only as directed. If symptoms persist, see your doctor.

Blanchard CL et al1 has conducted an independent study and reported the up to 8 hours relief effect of an ointment that contained a mixture of menthol, camphor and eucalyptol. This has been reported in the Eye, Ear, Nose and Throat journal (Blanchard CL, Borsanyi SJ, Grubb TC. 1964. Evaluation of Nasal Decongestion Drugs. Eye Ear Nose Throat Monthly. 143: 76-82.).

Study method: The authors carried out a double-blind crossover investigation over a three-year period on patients with colds or hay fever at the University of Maryland, Department of Otolaryngology, and at a private clinical laboratory. Subjects at the University of Maryland were selected clinic patients, while at the private laboratory subjects were obtained from the local population.

Seven and half gram of ointment containing a mixture of aromatic substances menthol, camphor and eucalyptol was rubbed on the chests of 50 subjects with colds and nasometer readings taken at 5, 15 & 30 minutes, 1, 2, 4, 8 & 10 hours (Note: a nasometer is an instrument used to measure and give feedback on the presence of nasality in speech production that may be induced by nasal congestion). As control, a similar quantity of petrolatum was rubbed on the chests of 15 of the same subjects with colds on the alternate day and nasometer readings were recorded at the same intervals. All tests comparing the effect of the medication were conducted by a cross-over design on the same subjects. All results were calculated as percent of change compared with the initial (pretreatment) reading.

2. Other Clinical Studies In addition, there were two clinical studies2 to evaluate objective (Nasal Airway Resistance/ Rhinometry) and subjective (6 point scale) measures of nasal congestion using standard methodology. In agreement with the published data, VapoRub was found to provide up to 8 hours long lasting relief from nasal congestion due to cold. Study method: Briefly, a total of ninety adult ‘coryzal rhinitis’ (common cold) patients with objective (by rhinoscopic and rhinomanometric assessment) nasal congestion were recruited. The patients were treated with VapoRub or Petrolatum or “No treatment” on each of the 2 days. Two teaspoons of treatment were applied to the chest, throat & back for 15 seconds. The patients were assessed 15, 30 minutes, 1, 2, 4 and 8 hours post application of VapoRub. Comparisons were made between VapoRub and placebo groups, and VapoRub and No Treatment groups. Study result:

Vicks VapoRub provides effective multi-symptom relief from aggravating cold symptoms when used in either of these two ways: 1. As medicated vapour to relieve nasal congestion. (For 6 years and above). Add 2 teaspoonfuls of Vicks VapoRub in a bowl of hot (not boiling) water and inhale the vapours to clear blocked nose and ease breathing difficulties. 2. As rub on massage for temporary relief from dry coughs and muscular aches due to colds. Vicks VapoRub contains cough suppressants. So if you want your loved one’s dreams to remain undisturbed, gently apply Vicks VapoRub on chest and throat before bedtime.

4.7 out of 5 stars
4.7 out of 5
9 global ratings
How are ratings calculated?
To calculate the overall star rating and percentage breakdown by star, we don’t use a simple average. Instead, our system considers things like how recent a review is and if the reviewer bought the item on Amazon. It also analyses reviews to verify trustworthiness.

corina
5.0 out of 5 stars best rub on the market
Reviewed in Australia on 4 September 2020
Size: 100gVerified Purchase
this is the best chest rub on the market and came with a great price
Read more
Helpful
Report abuse
See all reviews
Back to top
Get to Know Us
Make Money with Us
Let Us Help You
And don't forget:
© 1996-2021, Amazon.com, Inc. or its affiliates