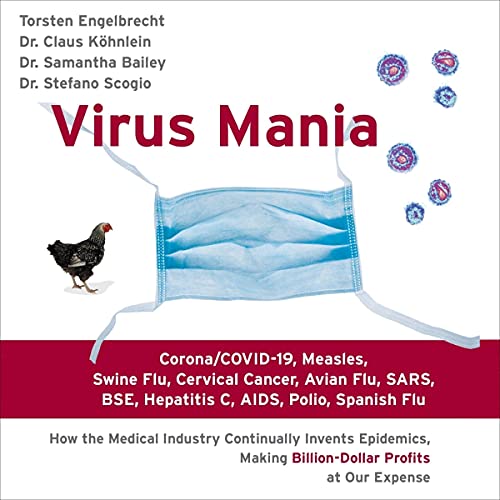 The population is terrified by reports of so-called COVID-19, measles, swine flu, SARS, BSE, AIDS, or polio. However, the authors of "Virus Mania", investigative journalist Torsten Engelbrecht, Dr. Claus Köhnlein, MD, Dr. Samantha Bailey, MD, and Dr. Stefano Scoglio, BSc PhD, show that this fearmongering is unfounded and that virus mayhem ignores basic scientific facts: The existence, the pathogenicity and the deadly effects of these agents have never been proven.

The book, Virus Mania, will also outline how modern medicine uses dubious indirect lab tools claiming to prove the existence of viruses such as antibody tests and the polymerase chain reaction (PCR). The alleged viruses may, in fact, also be seen as particles produced by the cells themselves as a consequence of certain stress factors such as drugs. These particles are then "picked up" by antibody and PCR tests and mistakenly interpreted as epidemic-causing viruses.

The topic of Virus Mania is of pivotal significance. Drug makers and top scientists rake in enormous sums of money and the media boosts its audience ratings and circulations with sensationalized reporting (the coverage of the New York Times and Der Spiegel are specifically analyzed). The enlightenment about the real causes and true necessities for prevention, and cure of illnesses is falling by the wayside.

Read more
©2021 Torsten Engelbrecht (P)2021 Samantha Bailey
Learn more about membership
By completing your purchase, you agree to Audible’s Conditions Of Use and Privacy Notice.
Sold and delivered by Audible, an Amazon company
Share

4.8 out of 5 stars
4.8 out of 5
218 global ratings
How are ratings calculated?
To calculate the overall star rating and percentage breakdown by star, we don’t use a simple average. Instead, our system considers things like how recent a review is and if the reviewer bought the item on Amazon. It also analyses reviews to verify trustworthiness.

Rico
5.0 out of 5 stars 5 stars for content, 2 for Kindle formatting and errors
Reviewed in Australia on 14 September 2021
Verified Purchase
This is a stunning book.

It shows how modern medical science, and consequently the practice of medicine, is, in large part, built on a foundation of sand. How, with the cooperation and encouragement of govenment, that's resulted in many unnecessary deaths, injuries and panics, including the current Covid 19 panic.

Written by two doctors, a microbiologist and a journalist, the information in this book is vital for the world, so it's extremely disappointing to see it so badly let down by poor Kindle formatting and proofing errors.

Buy this book, by all means, but maybe buy a pdf version, which i'm guessing will at least be correctly formatted, and then if you want to read it on a Kindle, just send it by email to your Kindle and put Convert in the subject line (https://www.amazon.com/gp/sendtokindle/email).
Read more
One person found this helpful
Helpful
Report abuse

loganon
5.0 out of 5 stars A must read for anyone anxious about infection
Reviewed in Australia on 6 August 2021
Verified Purchase
There were a few things about our current political decisions being made that did not seem right to me. It seemed the world I grew up in was gone. I started to suspect something was amiss and dis what research I could. But often times the opinionated were more embarrassing than enlightened. So I felt this book was an essential as it clearly argued a point I was interested in. Having read the book I would say I have come away with so much more than I expected. I have learned so much and for that I am thankful. But now I have a new mission to build my immune system. That on the surface send intuitive enough, but this book makes the practicality of it all to clear. Grounded in science and not afraid to ask questions that would make you unpopular. Sensible, logical, rational. Just what the world needs as it runs hellbent in the wrong direction
Read more
2 people found this helpful
Helpful
Report abuse

Makka
5.0 out of 5 stars Essential reading for anone wishing to know just how messed up our health system is.
Reviewed in Australia on 28 April 2021
Verified Purchase
This book is easy to read and very informative.
It is also extremely upsetting to read as you see just how corrupt and profit oriented our health system has been since Pasteur conned the world into believing Germ Theory.
Read more
2 people found this helpful
Helpful
Report abuse

Amazon Customer
5.0 out of 5 stars An excellent read.
Reviewed in Australia on 2 July 2021
Verified Purchase
Loved this book! A clear and concise history of humanities relationship with the viral world and our all too often overblown and manipulated response to them. It is obvious that this isn't our first time on this merry-go-round and whilst our medical response isn't getting any more effective, our elected leaders, who are supposed to work for us are increasingly using our complacency and fear to create unprecedented civil control and untold and unchecked wealth. Highly recommended.
Read more
One person found this helpful
Helpful
Report abuse

Peder Johansen
3.0 out of 5 stars Great information on viruses.
Reviewed in Australia on 29 April 2021
Verified Purchase
Great information on the history of viruses and the science, however its basic attack on certain nutritional requirements is off putting to me. The attack on the consumption of animal foods/products is one the things I found hard to get through. The science and history of viruses was eye opening. I would rate it higher if not for that.
Read more
One person found this helpful
Helpful
Report abuse

Marieb
5.0 out of 5 stars A change of heart.
Reviewed in Australia on 7 March 2021
Verified Purchase
A thought provoking insight into vaccinations generally, but more specifically Virus Mania can change a personal view on vaccinations given to the human population by the time you finish reading the book.
Read more
2 people found this helpful
Helpful
Report abuse

Ric Nicolson
5.0 out of 5 stars A great overview of virus history in the last 100 years
Reviewed in Australia on 14 March 2021
Verified Purchase
The book is quite long and in depth but is a great example of unbiased scientific research. It takes out any emotive arguments and looks at germ theory from a scientific standpoint and makes you think twice about what is happening today
Read more
2 people found this helpful
Helpful
Report abuse

jazziegran
5.0 out of 5 stars Inspirational
Reviewed in Australia on 24 May 2021
Verified Purchase
Thank you for the confirmation I now have. I am not a medical person but this book has encouraged me to do more research. I will be telling all I meet about this book, and hope that more people wake up to the lies we are being fed on a daily basis.
Read more
Helpful
Report abuse
See all reviews

KeithG59
5.0 out of 5 stars Required reading
Reviewed in the United Kingdom on 25 February 2021
Verified Purchase
Having followed an alternative view of the covid19 narrative and discovered Dr Sam Bailey on YouTube, I could not resist purchasing this book when she recommended it. I'm glad I did as it puts a lot of things into perspective and reveals the kinds of lies we are fed by 'scientists, politicians and the press.

If you have any interest in what I would term 'Proper science' and want some information on why and how we have been lied to and deceived over not only the last year, but the last 40, then this an excellent resource.

It should be required reading for our politicians, reporters and perhaps, even, some of those who call themselves 'Scientists '
Read more
78 people found this helpful
Report abuse

emma clatworthy
5.0 out of 5 stars Knowledge is the best defence in any situation
Reviewed in the United Kingdom on 26 February 2021
Verified Purchase
The media could not be loaded.
I haven't been able to put this book down since getting it. These brave, highly qualified & experienced experts, not only speak out, with thousands of references to evidence & support with facts, but they have the humanity in them to care enough to try to help people like us, the general public, who are so easily fooled as we have not studied or gained knowledge in this area. As a priority we should all have the knowledge and understanding of what makes our bodies sick, and what helps them to heal, so that we can stop relying blindly on those in positions of authority that have every opportunity to financially gain immensely off of our naiiveness. Arm yourselves with the best weapon we could ever have... Knowledge! This book is very well written, in simple terms that we the public can understand. I cannot recommend this book enough.
Read more
53 people found this helpful
Report abuse

Amazon Customer
5.0 out of 5 stars An eye-opener
Reviewed in the United Kingdom on 3 March 2021
Verified Purchase
(I’ve only read one chapter)

Nothing is written except that it is referenced. It talks about fundamental scientific theories in medicine and how they are deeply flawed. It talks about events as early on as the mid 19th century. Everything is written coherently. I keep turning from one page to the next. This book is worth a lot more than what it is priced at; I’d be willing to pay much more. Most importantly, I am grateful to all the people who were involved in the book’s production.
Read more
37 people found this helpful
Report abuse

AshleyG
5.0 out of 5 stars A brilliant, well researched, and thought provoking book.
Reviewed in the United Kingdom on 5 March 2021
Verified Purchase
In these days of misinformation and censorship it is good to be able to buy a superbly well researched book which tells the virus story with brutal honesty. This is a ‘must read’ for those concerned about present world wide events.
Read more
34 people found this helpful
Report abuse

Slim Jim
5.0 out of 5 stars We're being lied to, people
Reviewed in the United Kingdom on 29 March 2021
Verified Purchase
There's a mountain of evidence to show that the general public has been hoodwinked over viruses in general and, in the most extreme example to date, SARS-CoV-2. If you want to find out more, this is a good a place to start.
Read more
26 people found this helpful
Report abuse
See all reviews
Back to top
Get to Know Us
Make Money with Us
Let Us Help You
And don't forget:
© 1996-2021, Amazon.com, Inc. or its affiliates